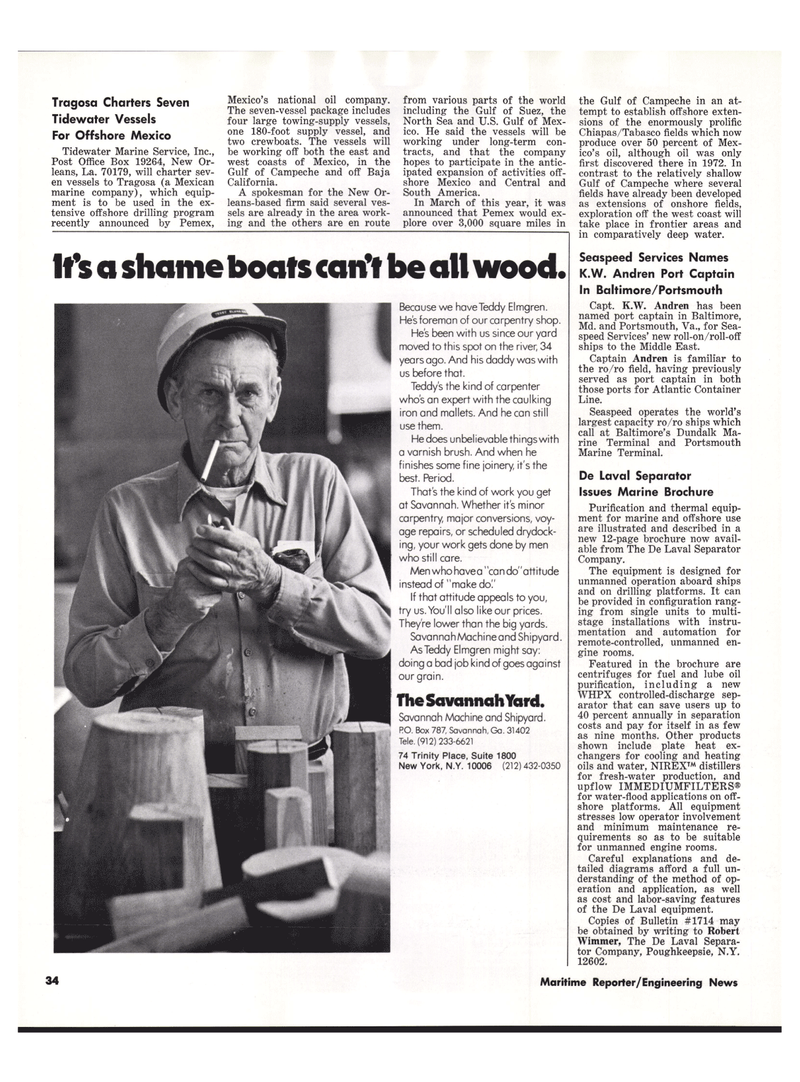 Post Office Box 19264, New Or- leans, La. 70179, will charter sev- en vessels to Tragosa (a Mexican marine company), which equip- ment is to be used in the ex- tensive offshore drilling program recently announced by Pemex,

The seven-vessel package includes four large towing-supply vessels, one 180-foot supply vessel, and two crewboats. The vessels will be working off both the east and west coasts of Mexico, in the

Gulf of Campeche and off Baja

A spokesman for the New Or- leans-based firm said several ves- sels are already in the area work- ing and the others are en route from various parts of the world including the Gulf of Suez, the

North Sea and U.S. Gulf of Mex- ico. He said the vessels will be working under long-term con- tracts, and that the company hopes to participate in the antic- ipated expansion of activities off- shore Mexico and Central and

In March of this year, it was announced that Pemex would ex- plore over 3,000 square miles in

It's a shame boats can't be all wood.

Because we have Teddy Elmgren.

He's foreman of our carpentry shop.

He's been with us since our yard moved to this spot on the river, 34 years ago. And his daddy was with us before that.

Teddy's the kind of carpenter who's an expert with the caulking iron and mallets. And he can still use them.

He does unbelievable things with a varnish brush. And when he finishes some fine joinery, it's the best. Period.

That's the kind of work you get at Savannah. Whether it's minor carpentry, major conversions, voy- age repairs, or scheduled drydock- ing, your work gets done by men who still care.

Men who havea' can do''attitude instead of "make do!'

If that attitude appeals to you, try us. You'll also like our prices.

They're lower than the big yards.

As Teddy Elmgren might say: doing a bad job kind of goes against our grain.

Chiapas/Tabasco fields which now produce over 50 percent of Mex- ico's oil, although oil was only first discovered there in 1972. In contrast to the relatively shallow

Gulf of Campeche where several fields have already been developed as extensions of onshore fields, exploration off the west coast will take place in frontier areas and in comparatively deep water.

Capt. K.W. Andren has been named port captain in Baltimore,

Captain Andren is familiar to the ro/ro field, having previously served as port captain in both those ports for Atlantic Container

The equipment is designed for unmanned operation aboard ships and on drilling platforms. It can be provided in configuration rang- ing from single units to multi- stage installations with instru- mentation and automation for remote-controlled, unmanned en- gine rooms.

Featured in the brochure are centrifuges for fuel and lube oil purification, including a new

WHPX controlled-discharge sep- arator that can save users up to 40 percent annually in separation costs and pay for itself in as few as nine months. Other products shown include plate heat ex- changers for cooling and heating oils and water, NIREX™ distillers for fresh-water production, and upflow IMMEDIUMFILTERS® for water-flood applications on off- shore platforms. All equipment stresses low operator involvement and minimum maintenance re- quirements so as to be suitable for unmanned engine rooms.

Careful explanations and de- tailed diagrams afford a full un- derstanding of the method of op- eration and application, as well as cost and labor-saving features of the De Laval equipment.

Copies of Bulletin #1714 may be obtained by writing to Robert