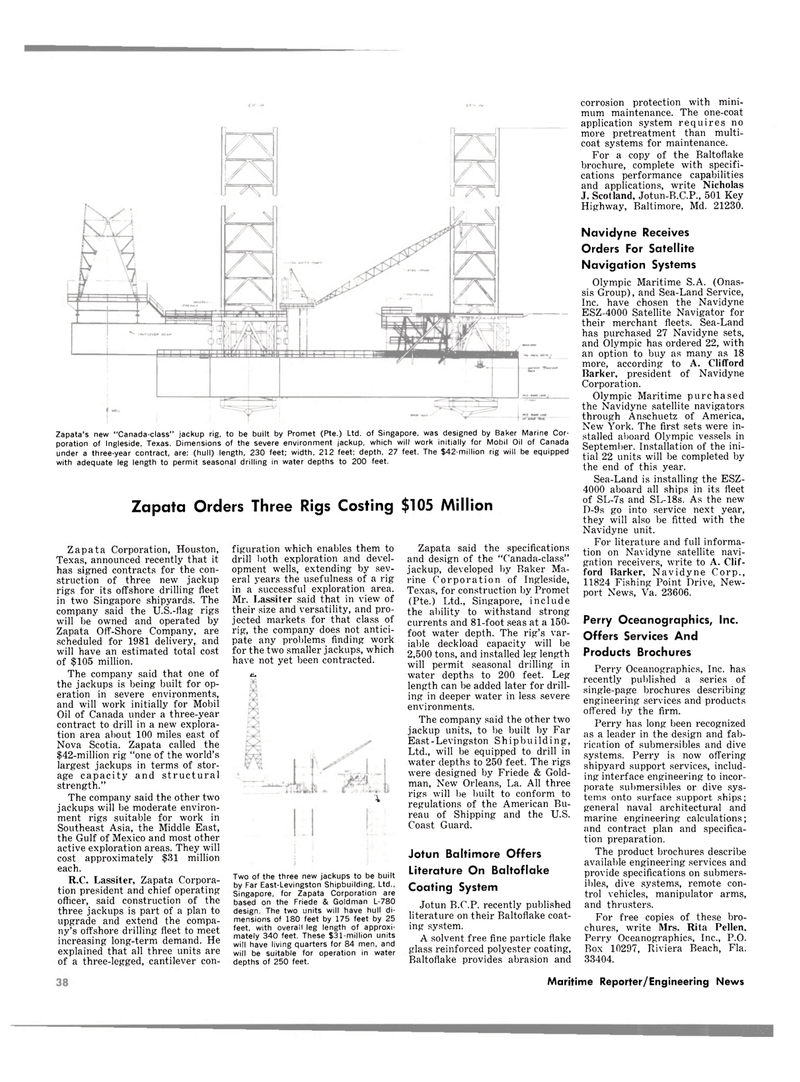 Zapata's new "Canada-class" jackup rig, to be built by Promet (Pte.) Ltd. of Singapore, was designed by Baker Marine Cor- poration of Ingleside, Texas. Dimensions of the severe environment jackup, which will work initially for Mobil Oil of Canada under a three-year contract, are: (hull) length, 230 feet; width, 212 feet; depth, 27 feet. The $42-million rig will be equipped with adequate leg length to permit seasonal drilling in water depths to 200 feet.

Texas, announced recently that it has signed contracts for the con- struction of three new jackup rigs for its offshore drilling fleet in two Singapore shipyards. The company said the U.S.-flag rigs will be owned and operated by

Zapata Off-Shore Company, are scheduled for 1981 delivery, and will have an estimated total cost of $105 million.

The company said that one of the jackups is being built for op- eration in severe environments, and will work initially for Mobil

Nova Scotia. Zapata called the $42-million rig "one of the world's largest jackups in terms of stor- age capacity and structural strength."

Southeast Asia, the Middle East, the Gulf of Mexico and most other active exploration areas. They will cost approximately $31 million each.

R.C. Lassiter, Zapata Corpora- tion president and chief operating officer, said construction of the three jackups is part of a plan to upgrade and extend the compa- ny's offshore drilling fleet to meet increasing long-term demand. He explained that all three units are of a three-legged, cantilever con- figuration which enables them to drill both exploration and devel- opment wells, extending by sev- eral years the usefulness of a rig in a successful exploration area.

Mr. Lassiter said that in view of their size and versatility, and pro- jected markets for that class of rig, the company does not antici- pate any problems finding work for the two smaller jackups, which have not yet been contracted. & \

Two of the three new jackups to be built by Far East-Levingston Shipbuilding, Ltd.,

Singapore, for Zapata Corporation are based on the Friede & Goldman L-780 design. The two units will have hull di- mensions of 180 feet by 175 feet by 25 feet, with overall leg length of approxi- mately 340 feet. These $31-million units will have living quarters for 84 men, and will be suitable for operation in water depths of 250 feet.

Zapata said the specifications and design of the "Canada-class" jackup, developed by Baker Ma- rine Corporation of Ingleside,

Texas, for construction by Promet (Pte.) Ltd., Singapore, include the ability to withstand strong currents and 81-foot seas at a 150- foot water depth. The rig's var- iable deckload capacity will be 2,500 tons, and installed leg length will permit seasonal drilling in water depths to 200 feet. Leg length can be added later for drill- ing in deeper water in less severe environments.

The company said the other two jackup units, to be built by Far

Ltd., will be equipped to drill in water depths to 250 feet. The rigs were designed by Friede & Gold- man, New Orleans, La. All three rigs will be built to conform to regulations of the American Bu- reau of Shipping and the U.S.

For a copy of the Baltoflake brochure, complete with specifi- cations performance capabilities and applications, write Nicholas

Inc. have chosen the Navidyne

ESZ-4000 Satellite Navigator for their merchant fleets. Sea-Land has purchased 27 Navidyne sets, and Olympic has ordered 22, with an option to buy as many as 18 more, according to A. Clifford

New York. The first sets were in- stalled aboard Olympic vessels in

September. Installation of the ini- tial 22 units will be completed by the end of this year.

D-9s go into service next year, they will also be fitted with the

Perry Oceanographies, Inc. has recently published a series of single-page brochures describing engineering services and products offered by the firm.