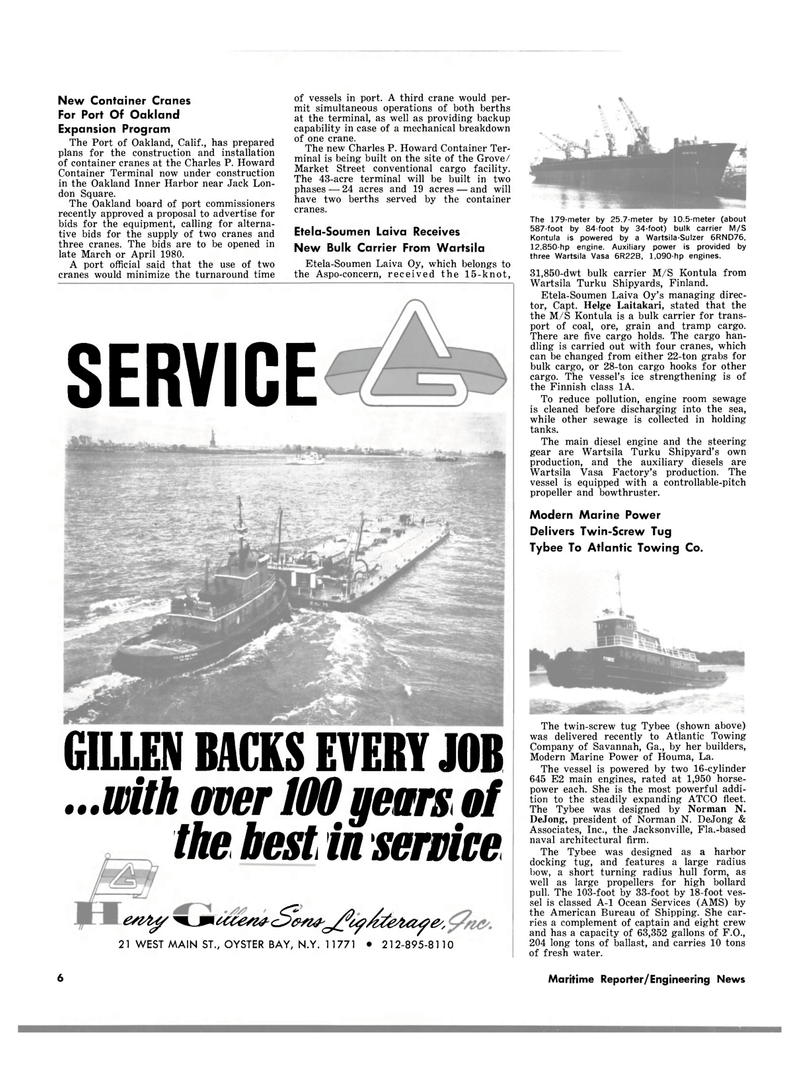 For Port Of Oakland

The Port of Oakland, Calif., has prepared plans for the construction and installation of container cranes at the Charles P. Howard

The Oakland board of port commissioners recently approved a proposal to advertise for bids for the equipment, calling for alterna- tive bids for the supply of two cranes and three cranes. The bids are to be opened in late March or April 1980.

A port official said that the use of two cranes would minimize the turnaround time of vessels in port. A third crane would per- mit simultaneous operations of both berths at the terminal, as well as providing backup capability in case of a mechanical breakdown of one crane.

The new Charles P. Howard Container Ter- minal is being built on the site of the Grove/

The 43-acre terminal will be built in two phases — 24 acres and 19 acres — and will have two berths served by the container cranes.

There are five cargo holds. The cargo han- dling is carried out with four cranes, which can be changed from either 22-ton grabs for bulk cargo, or 28-ton cargo hooks for other cargo. The vessel's ice strengthening is of the Finnish class 1A.

To reduce pollution, engine room sewage is cleaned before discharging into the sea, while other sewage is collected in holding tanks.

The main diesel engine and the steering gear are Wartsila Turku Shipyard's own production, and the auxiliary diesels are

Wartsila Vasa Factory's production. The vessel is equipped with a controllable-pitch propeller and bowthruster.

Company of Savannah, Ga., by her builders,

The vessel is powered by two 16-cylinder 645 E2 main engines, rated at 1,950 horse- power each. She is the most powerful addi- tion to the steadily expanding ATCO fleet.

The Tybee was designed by Norman N.

The Tybee was designed as a harbor docking tug, and features a large radius bow, a short turning radius hull form, as well as large propellers for high bollard pull. The 103-foot by 33-foot by 18-foot ves- sel is classed A-l Ocean Services (AMS) by the American Bureau of Shipping. She car- ries a complement of captain and eight crew and has a capacity of 63,352 gallons of F.O., 204 long tons of ballast, and carries 10 tons of fresh water.