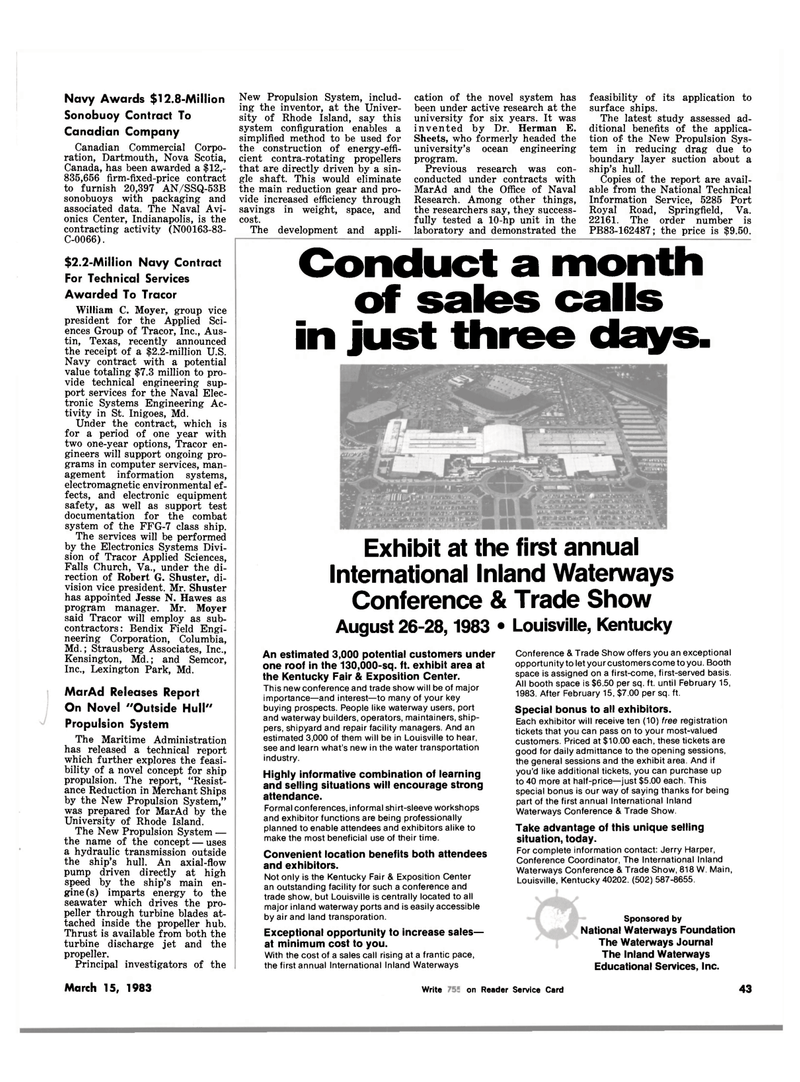 Under the contract, which is for a period of one year with two one-year options, Tracor en- gineers will support ongoing pro- grams in computer services, man- agement information systems, electromagnetic environmental ef- fects, and electronic equipment safety, as well as support test documentation for the combat system of the FFG-7 class ship.

The services will be performed by the Electronics Systems Divi- sion of Tracor Applied Sciences,

On Novel "Outside Hull"

The Maritime Administration has released a technical report which further explores the feasi- bility of a novel concept for ship propulsion. The report, "Resist- ance Reduction in Merchant Ships by the New Propulsion System," was prepared for MarAd by the

The New Propulsion System — the name of the concept — uses a hydraulic transmission outside the ship's hull. An axial-flow pump driven directly at high speed by the ship's main en- gine (s) imparts energy to the seawater which drives the pro- peller through turbine blades at- tached inside the propeller hub.

Thrust is available from both the turbine discharge jet and the propeller.

Principal investigators of the

New Propulsion System, includ- ing the inventor, at the Univer- sity of Rhode Island, say this system configuration enables a simplified method to be used for the construction of energy-effi- cient contra-rotating propellers that are directly driven by a sin- gle shaft. This would eliminate the main reduction gear and pro- vide increased efficiency through savings in weight, space, and cost.

The development and appli- cation of the novel system has been under active research at the university for six years. It was invented by Dr. Herman E.

Previous research was con- conducted under contracts with

MarAd and the Office of Naval

Research. Among other things, the researchers say, they success- fully tested a 10-hp unit in the laboratory and demonstrated the feasibility of its application to surface ships.

The latest study assessed ad- ditional benefits of the applica- tion of- the New Propulsion Sys- tem in reducing drag due to boundary layer suction about a ship's hull.

Copies of the report are avail- able from the National Technical

Conduct a month of sales calls in just three days.

Exhibit at the first annual

An estimated 3,000 potential customers under one roof in the 130,000-sq. ft. exhibit area at the Kentucky Fair & Exposition Center.

This new conference and trade show will be of major importance—and interest—to many of your key buying prospects. People like waterway users, port and waterway builders, operators, maintainers, ship- pers, shipyard and repair facility managers. And an estimated 3,000 of them will be in Louisville to hear, see and learn what's new in the water transportation industry.

Formal conferences, informal shirt-sleeve workshops and exhibitor functions are being professionally planned to enable attendees and exhibitors alike to make the most beneficial use of their time.

Not only is the Kentucky Fair & Exposition Center an outstanding facility for such a conference and trade show, but Louisville is centrally located to all major inland waterway ports and is easily accessible by air and land transporation.

Exceptional opportunity to increase sales— at minimum cost to you.

With the cost of a sales call rising at a frantic pace, the first annual International Inland Waterways

Conference & Trade Show offers you an exceptional opportunity to let your customers come to you. Booth space is assigned on a first-come, first-served basis.

Special bonus to all exhibitors.

Each exhibitor will receive ten (10) free registration tickets that you can pass on to your most-valued customers. Priced at $10.00 each, these tickets are good for daily admittance to the opening sessions, the general sessions and the exhibit area. And if you'd like additional tickets, you can purchase up to 40 more at half-price—just $5.00 each. This special bonus is our way of saying thanks for being part of the first annual International Inland