From harvesting Canadian sealskins to breaking through Antarctic Ice, GC Rieber has always been at home in the world’s extreme environments. The business has now diversified into three key segments (ice support, seismic and subsea) and is focused on stability – balancing its ambitions with a conservative financial approach that sees it maximize equity in all vessels and protecting itself from the cyclical storms of the industry. CEO Irene Basili talks to Alan Johnstone about the strategic thinking steering the GC Rieber fleet.

GC Rieber appears to feel most at home in environments that give everyone else the chills, both figuratively and literally. The offshore/specialized shipping player, based in Bergen with an international fleet of 11 vessels, isn’t just riding out the current swells ripping through the industry; it’s enjoying the view from the top of the waves.
2012 was the firm’s best ever year (in terms of EBITDA), as it pulled in revenues of $132m and recorded an EBITDA of $64.4m (EBIT $36.6). Fleet utilization stood at an impressive 94%. On top of that, 2013 sees it boast a current contract backlog of $598m, while it is also investing in two ambitious newbuild projects (one offshore construction vessel and one seismic vessel) that will see it look to cement its position in its niche markets. Those niche markets are subsea/offshore, seismic surveying and (both Arctic and Antarctic) ice support. Talk about the chills.

A Question of Balance
CEO Irene Basili is, however, a warm and engaging interviewee; eager to share the secret behind the firm’s recent successes. Basili, formerly a Vice President of PGS and CEO of Arrow Seismic, joined GC Rieber in 2011 (a year when the firm pulled in NOK 625 million - over NOK 150 million less than in 2012) and has built a new, young management team around her, while refocusing the business on clear strategic aims.
These, she imparts, are simple: “We want to achieve the maximum equity in our vessels, focus on high specification ships that give something unique to clients, and play to our strengths in niche markets that give the company balance and afford us protection against the cyclical nature of the shipping industry.”
She continues: “We have no ambition to be a huge, commodity player, but rather to be the preferred shipping partner for our chosen clients. We have plenty of ambitions, of course, but we balance that with a conservative financial approach.” ‘Balance’, it soon becomes obvious, is a key word for Basili and Rieber. The firm has chosen its segments carefully, specializing in niche areas where there are limited global fleets, but growing demand. In the case of subsea/offshore and seismic operations, that growing demand will always be susceptible to downturn, due to its inherent reliance on oil price, but the ice support sector gives the business something different – a counterbalance.
“By definition it’s not oil related,” Basili explains. “We own and operate five vessels in this segment and have over 50 years of experience (GC Rieber’s first Antarctic expedition was back to 1958 with the Polar Bjørn), which in itself is built on our sealing and fishing heritage dating back to the 1930s. That experience means that we can design all our vessels in-house and secure long-term contracts with key customers, such as the UK Ministry of Defence (with the HMS Protector in the Antarctic) and the British Antarctic Survey.
“As interest in these areas grow – whether from government bodies wanting to protect their territorial rights, or from scientific groups that require supply shipments to research stations – so does our market strength. This proposition gives us a stable income that provides us with a degree of protection from the inevitable industry cycles.”

Capital Idea
Something else that affords protection, although some might argue that it also hinders growth, is the company’s approach to equity in its vessels. Basili stresses that the firm has what she calls a “non-negotiable strategic aspect” whereby it always endeavors to have 50% or more equity in its floating assets.
“We always surpass the bank’s covenants,” she comments, “which are typically around a 30% equity ratio. That makes us pretty unique in this environment.
“The reason we do that is to give the business long-term protection, so we’re not forced to dispose of our assets when the cycle turns less favourably. It helps us sleep at night,” she remarks with a broad smile.
But what about hindering growth? Concentrating capital in this manner inevitably leads to fewer individual investments, less risk taking? Yes and no, seems to be Basili’s answer.
She admits that in capital intensive segments it can be a constraint, but argues that exercising a degree of caution is only sensible when it comes to building a sustainable business. “Besides,” she adds, “we are very flexible when it comes to finding finance models for our vessels, either with our clients or financial partners. We also have a history of publically listing parts of our business, such as the seismic fleet, to generate capital. We find solutions when we need to, but we always keep a favorable equity balance.”

Building for the Future
The firm’s intrinsic caution not does not, however, make it shy away from ‘splashing the cash.’ GC Rieber is currently engaged in two newbuild projects, both at Norwegian yards, for $136.4m and $119.3m respectively.
The first is for a high-end construction support vessel (CSV) for the subsea market from Ulstein, built to the yard’s design but with extensive project design input from GC Rieber’s in-house team to maximize its commercial and operational flexibility. Basili notes that this includes the addition of a 250-ton crane, with a 25m beam, that, unlike many competing vessels with similar cranes, “can actually lift 250 tons.” This piece of equipment alone carries a price tag of NOK 70 million. Delivery of the vessel is expected in Q1 2014, while the firm has an option for one additional vessel of the same type.
Fellow Norwegian yard Kleven has the contract for the second ship, which is scheduled for delivery in Q1 2015. This is a seismic vessel that is being built to GC Rieber’s own design, as used on sister ships Polar Duke and Polar Duchess. Like its siblings, the “Super Duke” (Basili doesn’t appear overly keen on this name, so expect something different come the christening) will be contracted out to Norwegian seismic outfit Dolphin Geophysical on a long-term basis (five years, with an additional five year option). The GC Rieber CEO is clearly excited about this project: “We, and the client, are extremely happy with the design,” she effuses. “It’s based around a completely different philosophy to competing seismic vessels.”
Basili explains this by stating that the Polar Duke and Duchess are “very slender” vessels, while the “Super Duke”, which will have the capacity for 22 streamers (against the 12 of the existing vessels), is only 2m wider (21m wide). Compare this, she says, with the latest generation of ships from some of the other key seismic players and the GC Rieber ships are less than one-third as wide.
“This,” she continues, “helps give them an operational advantage, especially in seasonal markets (typically frontier acreage, off, for example, the South West coast of Africa), because they are fast and travel well through harsh environments. In addition, they are very efficient and economical vessels. “This gives us and our clients clear market advantage.”

Long-term Vision
The investment in one ship’s seemingly excessive streamer capacity (typical seismic surveys rarely utilize more than 16 streamers) and the other’s huge lifting capability provide a further nod in the direction of GC Rieber’s strategy for stability and business sustainability.
The firm, Basili stresses, is not an asset player; it’s a long-term industrial shipowner that bases all investments on 25 year returns. The extra streamer capacity and crane specification give the vessels a degree of future-proofing, ensuring that they can handle the market demands both of today and tomorrow. It is a bold yet also calculated, even cautious, approach, which speaks volumes about GC Rieber’s entire business philosophy.
But there’s pragmatism there too. Basili candidly admits that she is not “in love” with her vessels and determined to own them for their lifetimes.
“We’re open to strategic exits if the time and conditions are right,” she states. “The value creation in projects often comes in the first five years or so, so if a client puts in a good offer for a vessel after that then we’ll consider it as a way to plough back funding into new projects.”
That attitude, Basili says, can help with the constant drive for 50% equity stakes – that “non-negotiable” financial stipulation previously touched upon. To some that stance may appear like a company going to extremes, but then GC Rieber is used to that. And it gets results. 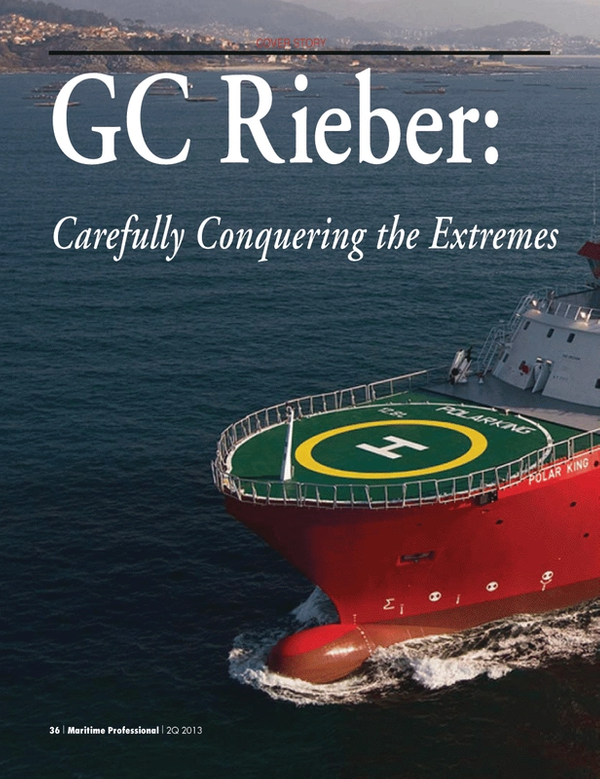