By Brooke King and Mark Lane

Today’s hottest commodity – on land, at sea and in your bunker tanks – has a rich history and an even brighter future.

LNG was first transported in 1959 from Lake Charles, LA to the United Kingdom. This voyage demonstrated the feasibility of waterborne transportation of LNG as a tradable commodity. In the 1960’s and 1970’s, three ‘large-scale’ liquefaction plants were built around the Mediterranean basin creating an LNG ‘trade’ between North Africa, the United Kingdom and Western Europe. Meanwhile in the United States, LNG production shifted from the Gulf of Mexico to Alaska with the advent of the Pacific-Rim trade, which would grow to include large scale, green-field LNG production facilities in the Arabian Gulf, Malaysia and Indonesia. The bulk of the off-take from these producers would be initially in Japan then followed by Korea.
The 1970’s also brought new types of LNG cargo containment, allowing for larger LNG carriers (LNGC), which promoted a flourishing new build carrier program in the 1980’s to support the Atlantic-rim and Pacific-rim LNG trades. With the 1990’s came a definitive push within the LNG industry with the Kyoto Protocol, reflecting a growing concern about CO2 emissions, nuclear waste and energy-efficiency, marking the start of a re-emerging commitment to natural gas as the ‘clean’ fuel.
The LNG fleet during the initial thirty-five-year period of LNG shipping grew to over 100 vessels. In the next eight years, the fleet doubled to over 200 vessels and now, ten-years later, the size of the LNG fleet is projected to double once again, passing the 400-vessel mark. Over time, the size of LNG carriers has grown from capacities of just 1,000 cubic meters all the way to today’s ultra Large LNGC vessels boasting cubic capacities of as much as 266,000 cubic meters.
Innovation has been the rule rather than the exception within the LNG transport trades. There were many drivers for the evolution, change, and maturation of the LNG industry. Excelerate Energy, initially a small, privately-held Texas-based start-up, was undeniably one of them. Beginning with a simple business plan that called for developing spot trading of LNG in global markets, providing ‘offshore’ LNG regasification, and delivering gas into subsea pipeline distribution systems, Excelerate was behind many of these ‘first-of-a-kind’ concepts. Many of these practices – and others – would eventually be embraced by the LNG industry, and are still in use today.
A raft of new innovation is in play to support the ongoing LNG boom. Excelerate has been involved in many of these projects, from the outset.
Some of Excelerate’s landmark achievements are depicted in the timeline shown below:

Cargo to Pipeline
In 2003, Excelerate developed technology that would allow LNG to be regasified onboard an LNG carrier for direct delivery of gas into a high-pressure gas pipeline. This technology was incorporated into the design of an LNG vessel and would later be known as a Floating Storage Regasification Unit (“FSRU”). The purpose of an FSRU is to provide a platform to load LNG at a shore-side facility, transport the LNG to a market location and then regasify the LNG into a vapor to be transferred into a pipeline grid for consumer or industrial use. The FSRU’s onboard regas system eliminates the need for an expensive land-based regasification facility. This concept became an attractive alternative to conventional land-based LNG regasification facilities because it can be constructed in a fifth of the time and at a tenth the cost.

Pipeline Connection Alternatives
One popular method to connect an FSRU to a gas transmission infrastructure is through dockside equipment, which incorporates the off-take pipeline and a jetty-mounted, articulated, high-pressure gas-offloading arm to connect to an FSRU. This method is referred to as a GasPort facility. The jetty includes all necessary mooring and fendering structure to safely berth the LNG regasification vessel.  The regasification system discharges the natural gas into the high-pressure gas arm for delivery into the pipeline.  Excelerate’s first GasPort facility, Teesside GasPort near Middlesbrough, UK, was commissioned in February 2007. As an example of the flexibility and concept-to-market speed the GasPort technology offers, Teesside GasPort was brought into service within 16 months of site selection and at a cost roughly 10% of a conventional land-based LNG terminal of similar capacity.  Fifteen-months later, Bahía Blanca GasPort was commissioned in Argentina with similar dispatch. Both facilities employed existing, but under-utilized jetty and berth infrastructures to meet the fast-tracked needs of each project. Since 2009, Bahía Blanca GasPort has been in year-round regasification, relying on regular and consistent ship-to-ship (STS) transfer operations to deliver supply to the FSRU. The gas throughput capacity of an FSRU can be increased to meet the larger regasification needs of customers with the higher capacities presented by the next generation of FSRUs.
For locations where dockside delivery is not possible, an alternative offshore gas delivery method is available. A  Submerged Turret Loading (STL) system, which consists of a subsea buoy mooring and gas-connection swivel system, is located offshore and linked to a subsea pipeline to shore by a flexible riser. This port facility system, referred to as a Gateway, is used as both the mooring mechanism for the FSRU and conduit through which natural gas is delivered to the subsea pipeline. When an FSRU arrives at a Gateway, the subsea buoy is drawn into the hull of the vessel and locked into place. The regasified LNG then flows from the FSRU, through the STL buoy and riser, into the subsea pipeline and onward to shore, where it is delivered to the local gas-pipeline distribution network.  Excelerate’s first Gateway facility, Gulf Gateway, was commissioned in March 2005 as the first LNG deepwater port facility in the world. The STL system demonstrated its ability to withstand natural disasters such as Hurricane Katrina in 2005 and Ike and Rita in the years since. The second Gateway facility, Northeast Gateway, was commissioned in May 2008 as a base-load facility serving the markets in the northeast United States.

Ship-to Ship Transfer of LNG
FSRUs utilize STS transfer of LNG in order to optimize the availability of the regasification vessel storage and regasification services. During the performance of an STS, LNG is transferred between a laden LNGC to an FSRU at or near a market access location. STS transfer can be performed between LNGC and FSRU vessels for cargo transfer or for gas-in and containment cool-down, which is needed after LNG vessel repair and survey periods. The STS feature can save time and money while easing berth constraints at traditional LNG load port facilities. Excelerate utilizes four different methods for STS transfer of LNG: double-banked adrift, double-banked at anchor, double-banked moored at a Gateway buoy, or double-banked moored at a GasPort jetty. Excelerate Energy, working with Exmar NV, developed and implemented the commercialization of STS and has successfully accomplished almost 400 STS operations through the second quarter of 2013.

Onboard Regasification Systems
The main components of the onboard regasification system are LNG feed pumps located in the cargo tanks, high-pressure (HP) LNG pumps, shell & tube vaporizers, and heating water circulating pumps. During the onboard regas process, LNG stored in the cargo tanks of the FSRU is fed to the suction drum utilizing the LNG feed pumps. The suction drum provides the net positive suction head (NPSH) which is used to buffer the HP LNG pump suction and prevent pump impeller cavitation.  The HP LNG pump is a 13-stage centrifugal pump which typically operates above 100 bar discharge pressure and draws LNG from the suction drum to pressurize it and send it to the vaporizers. Excelerate Energy’s regas vessels are outfitted with six vaporizers; for nominal output five are online with one in reserve. The vaporizers are a shell and tube-type heat exchanger, adapted to reduce any adverse effect due to the vessel’s motion.  Compared to land-based vaporizers, those onboard a FSRU are much more compact and have been designed to use freshwater or seawater as the heat exchanger medium. The heating water can be drawn directly from overboard or circulated through the vessel’s salt water ballast system, boosted by the heating water booster pumps and delivered to the vaporizers.
The onboard regasification system can be used in one of three different modes, depending on sea water temperature, location, environmental permits and other concerns:

The maximum rate of discharge of the natural gas from a FSRU is determined by a combination of the availability of capacity on downstream pipelines and the regasification capabilities of the facilities located onboard each FSRU.

On the Rise
The demand for vessels with regas capability is on the rise. Indeed, almost one-half of the more than 100 developmental import terminals in play today intend to use floating regas ships instead of conventional onshore terminals. And while Excelerate Energy is just one of the innovative companies using offshore buoys to discharge regas LNG from an FSRU, this concept of deepwater ports to unload regas was proven at Excelerate’s Gulf Gateway, located 116 miles off the coast of Louisiana, back in 2005. Excelerate Energy has an active deepwater port facility, Northeast Gateway, with two STL buoys 13 miles off the coast of Massachusetts. Today, two of three operating STL-based LNG terminals in the world have Excelerate FSRUs serving the market access facility.
Bringing the FSRU closer to shore with quay-side or sea-island facilities for HP gas delivery into customer specified domestic power plants and natural gas distribution grids utilizing the GasPort concept, has created additional options for potential customers. The vast majority of the unconventional LNG terminals in the world are based upon Excelerate’s GasPort concept and five of the eight operating dock-side unconventional LNG terminals in the world have Excelerate FSRUs serving the market.

What’s Next?
With the demand for regasification vessels on the rise, consumer markets continue to drive the economies of scale for larger capacity, higher send-out vessels. Several companies are building new larger capacity vessels. Excelerate’s new 173,400m3 FSRU will have a record-setting regas capacity of 800 Mscf/d with peaking capacity to 1.2 Bscf/d. Excelerate is also busy working on the design of Floating Liquefaction Storage and Offloading vessels (FLSO). These FLSOs are the next frontier in linking cost-effective and reliable natural gas production to global market access points and will someday be a high-tech compliment to Excelerate’s FSRU fleet.

LNG: Let’s Not Guess
The LNG industry – with Excelerate Energy typically at the spearhead of advance – has consistently created the drive to seek out new means of meeting consumer demand, in an environmentally sound manner, at very low risk and at a reasonable, affordable cost. The history of LNG transport has always been one of safety and innovation. And while Excelerate is justifiably proud of its Floating Infrastructure Regasification and Storage Technology solutions, its internal culture remains focused not only on being first, but instead the first to do something right. 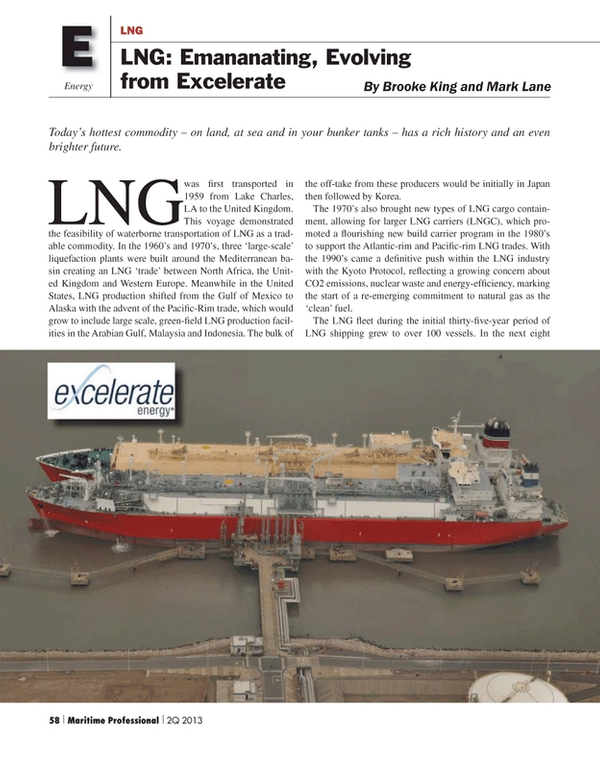