From Norway to Brazil (and Back)

Norway’s involvement with this South American energy powerhouse predates the current oil boom. Today’s commerce model flows in both directions in ever increasing frequency and volumes.

Make no mistake about it: Brazil is important to Norway. So important that the Norwegian government’s strategy for developing additional business here includes broad reaching initiatives such as Innovation Norway (IN), providing advisory and networking services for Norwegian companies in Rio de Janeiro, INTSOK (Norwegian Oil and Gas Partners – offering a range of services to the oil and gas industry in close cooperation with Innovation Norway), The Norwegian Seafood Export Council (marketing Norwegian seafood industry in Brazil) and branches of  the Norwegian–Brazilian chambers of commerce in Rio de Janeiro, São Paulo and Oslo. Additionally, The Norwegian Embassy, the Consulate General in Rio de Janeiro (co-located and cooperates closely with Innovation Norway, INTSOK and the Seafood Export Council) also play an important coordinating role.
Global energy heavyweights Brazil and Norway have been doing business for decades. Over time, Norwegian firms of all sizes have established and maintained a physical presence in Brazil. The ongoing  oil boom in Brazil has only solidified these ties and Norway’s recognized leadership in oil & gas technology have been well received locally and put to good work in the southern Hemisphere. Trade between the two nations has increased sharply – almost 300 percent increase – in the last decade alone.
In the beginning, the most visible ties between these seemingly different and geographically separated countries included primarily the cod and newsprint trades. That’s anything but the case, now.
Weighing in on all of that last month was the Norwegian Consul for Commercial Affairs in Rio de Janeiro, Helle Moen and Henrique Schlaepfer, Area Director for Latin America, Wilhelmsen Ships Service. Moen told MarPro in April, “The size of the Brazilian market, the country’s diversified economy and the growth of its middle class offer opportunities for a broad range of Norwegian companies.” She added, “the Norwegian petroleum and maritime sector is already strongly represented here. And, Brazil is one of Norway’s most important export markets and one of the most important recipients of Norwegian investments.”
It turns out that doing business in Brazil has its rewards. Those rewards do not come without challenge – or risk.

Norway: Right at Home in Brazil
It isn’t so much a story of what Norway can bring to Brazil as much as it is a list of who is already here. And that list is a veritable “who’s-who” of over 150 Norwegian companies, 95% of whom are related to the oil & gas and shipping business. The major players with a significant local presence include, among others, Statoil, Kongsberg, Aker Solutions, Farstad, Solstad along with a raft of Norwegian financial institutions. That said, Helle Moen insists, “The majority of the companies established here are small and medium sized companies.”
Wilhelmsen Ship Service is one such Norwegian company, providing a wide range of products and services to the maritime industry. Wilhelmsen Ship Service do Brasil today operates from 40 service locations, catering to ships and rigs all along the Brazilian coastline. Henrique Schlaepfer told MarPro in April, “We have been in Brazil for a long time. There is no doubt that we have experienced tremendous growth here; in the last 3 years alone our sales in Brazil have doubled.”
Schlaepfer says that the potential for even greater growth is still very real. The advent of the energy era in Brazil has more than tripled in the number of Norwegian firms on Brazilian soil in the last decade alone. And, because Norway has always been a leader in exporting technology and expertise to the global oil patch, their presence in the world’s fastest growing offshore market is a natural, convenient and easy fit.

Away from the Coast, Close to the Heart
Leveraging its rich hydropower resources, Norway has long been Europe’s largest aluminum producer. This involved early cooperation with Brazilian companies to ensure the availability of raw materials. To that end, Norway-based Hydro and the Brazil bulk commodity heavyweight Vale concluded an agreement in 2011 that will benefit both players into the foreseeable future.
In the area of renewable energy, Norway is already in close dialogue with Brazil to promote hydropower and other forms of renewable energy. As Brazil ramps up its nascent hydropower development program, Norway’s expertise and financial help will likely be a big part of that, as well as some local bioethanol projects. And, consistent with all of that, Norway is also known for its attention to environmental legislation and standards, and is keen to help these industries develop in as clean and environmentally sensitive manner. Indeed, Environmental issues are high on the political agendas of both countries, and Brazil today finds itself at the forefront of efforts to reduce deforestation, holds a leading position in biofuel production and is a key player in global processes concerned with the environment and sustainable development. As their industrial relationship increases, both nations are cooperating to provide for sustainable development. Moen adds, “Norway wishes to be an active and constructive cooperation partner in these efforts. Norway supports Brazil’s efforts to reduce emissions from deforestation and forest degradation through its contribution to the Amazon Fund. Even before the establishment of the Fund, Norway had a long history of support for Brazilian indigenous people’s organizations both in and outside the Amazon region.”

Balancing Opportunity with Risk
According to Norway’s Helle Moen, “Brazil offers many opportunities for Norwegian companies, but they also need to take active steps in to deal with local challenges. For example, Companies tend to find the Brazilian legislation and taxation system complex.” Beyond this, intense competition for qualified local labor is fueled by local content requirements that companies must respect. Moen adds, “IN aims to make Norwegian companies competitive in international markets. We support the business development of Norwegian industry through financing, competence development training, temporary office facilities in Rio, market analysis, partner search and business development plans.” In short, IN’s main goal is to contribute to the increase the success rate of the Norwegian companies in foreign markets, Brazil in particular.
Henrique Schlaepfer, Area Director for Latin America, Wilhelmsen Ships Service is candid about what it takes to make it here. He explained, “Major challenges include the bureaucracy and protectionist policies.” For example, he said, and because of local taxes and regulations, foreign manufactured products can be up to four times as expensive as products manufactured in Brazil. Schlaepfer insists that he can compete, however. “Our answer is to focus on our network, our proven quality and our ability to deliver at the right time at the right price.”
On the subject of bureaucracy, he pointed to the large number of governmental agencies that add to an already difficult documentation process for foreign companies doing business here. That said, Henrique also reported that the Brazilian government was taking strides to improve its performance, digitalizing documentation, decreasing the amount of documents required and engendering a mentality of efficiency into government service. Wilhelmsen’s efforts to engage an efficient workforce have also presented problems – training and education in particular – even as they try to employ a more local staffing policy here. For this reason, WSS actually certifies even local staff from Wilhelmsen Headquarters in Norway, in order to maintain their standards.
As Brazil struggles with the long term debate over of how best to distribute the vast financial benefits of the oil and gas boom to society, Norway watches with interest, but largely from the sidelines. According to Moen, Norway’s fund was established to ensure that tomorrow’s generations benefit from today’s oil wealth. For example, the Norwegian Government Pension Fund Global (GPFG) was structured to safeguard economic stability for both the long and short term, with the intent of ensuring that revenues from the petroleum sector are gradually phased into the Norwegian economy from the GPFG to a level that can be sustained. But Moen also says, “Nevertheless, Norway does not intend to interfere in internal questions of Brazil.” That said, the Norwegian Fund held $5.9 billion worth of equities in 98 different companies, and $732 million of bonds from seven bond issuers in Brazil.

Commerce: a two-way street
Longstanding commercial ties that bind both nations move in both directions. Starting with the dried codfish and coffee trades in the 1800’s, Norway’s imported goods from Brazil have always been important. These came to USD $1.4 billion USD in 2012, an increase of 11% from 2011. And Brazilian companies – notably Vale’s 2011 investment in Norsk Hydro (via Norsk Hydro ASA’s acquisition of Vale’s aluminium activities) – are significant investors in Norwegian enterprises. Today, Vale’s 22 percent ownership in Norsk Hydro makes Vale the second largest shareholder in Norsk Hydro after the Norwegian state.

Preparing for tomorrow - Together
Consistent with its far reaching plans for offshore oil development, Brazil is actively building a fleet of offshore service vessels (OSV) to service those needs. The considerable backlog of Brazilian shipyards – 367 vessels, of which about 70 are OSV’s – includes a clear effort to build at home to service local requirements. It also incorporates a vast amount of technology, knowhow and equipment from other places. No one country is more involved in that effort than is Norway.
As a leading manufacturer and operator of OSVs, Norway has always been closely linked with this fast growing market; here, in the U.S. Gulf of Mexico and other markets, too. That’s because as Norway’s oil & gas industry grew up in the rough weather of the North Sea, so too did the need for tough, well-crafted and comfortable vessels. Many innovations, therefore, emanating from Norway - architectural design, dynamic positioning, eco-friendly, dual fuel propulsion systems, cranes and world-renowned crew accommodations are coming to the offshore Brazil markets.
As many as nine local shipyards, accounting for more than USD $4 billion in investments, affirms UNCTAD’s 2012 data that  Brazil’s shipbuilding program is one world’s largest, especially as compared to the size of its own fleet. Much of that is being accomplished through joint ventures with others. And, the latest Petrobras business plan (2013-2017) – Brazil’s major local oil and gas firm – predicts and plans for substantial growth in that sector. That leaves plenty of room for more growth in trade between Norway and Brazil.

Uncommon Bonds – Critical Ties
Arguably, and in the global arena, there may be no two more dissimilar nations with more in the way of economic ties today than Brazil and Norway. Nevertheless, from the North Sea all the way to the Southern Atlantic Ocean, commerce flows in both directions, in the form of trade, technology and a common desire to improve both bottom lines. From the Brazilian side of the equation, the growing pains that impact business are slowing being sorted out. Separately, Norway’s government continues to invest heavily in terms of time and money to make sure that the relationship(s) continue to flourish. Very much a work in progress, it is an imperfect relationship, one with deep historical roots, and staying power that is likely to grow even stronger. 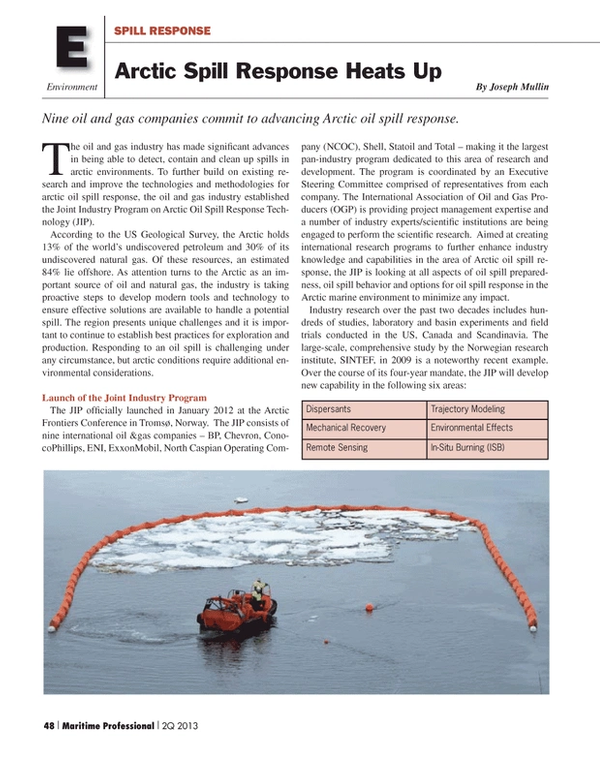 Read From Norway to Brazil (and Back) in Pdf, Flash or Html5 edition of Q2 2013 Maritime Logistics Professional