Debunking the myths about international ship registries, choice of classification society and a raft of other variables.

Throughout the shipping world, ship registries, where a vessel is tied to laws of a particular nation, remain a subject of continual debate. As world trade has grown, registries have moved offshore, mirroring developments in the realm of the multinational corporations that have fueled the demand for shipping, and the movement of shipowners to financial centers away from their home countries.
The commercial advantages of offshore registries – less restrictive labor requirements and taxation regimes that favor non-resident businesses, to name just a couple – are well known.
In a trend started initially by traditional European shipowners and then supported by leading shipping nations creating offshore alternatives for ship registries, the number of open registries has flourished. These so-called “flags of convenience” also attract a fair amount of criticism related to perceived substandard conditions, less than competent crew and a general penchant for favoring the bottom line over an operation should be run in a safe and environmentally correct fashion. But those conditions, if they ever existed at all on a scale to cause great concern, have largely evaporated. A closer look at reliable data tells us why, and how.

Flags & Countries: Does one have anything to do with the other?
At the beginning of 2012, according to the United Nations Conference on Trade and Development’s (UNCTAD) “Review of Maritime Transport,” the global mix of vessels of 1,000 gross tons and above totaled nearly 47,000 vessels, with a cumulative deadweight of 1.5 billion tons. Panama topped the list of registries, with 6,739 vessels of 327.3 mdwt, followed by Liberia (2,996 / 189.8 mdwt), the Marshall Islands (1,833 / 122.8 mdwt), Hong Kong (1,761 / 116.8 mdwt) and Singapore (2,022 / 81.7 mdwt). Greece, a traditional maritime nation (859 vessels / 72.4 mdwt) and the Bahamas, an open registry (1,332 vessels / 69.1 mdwt) also boast sizable fleets.
The UNCTAD data also reveals, perhaps of more importance, the links between ship registries and the country of underlying ownership. The United States controls 2,055 deepsea vessels totaling 54.6 mdwt with 267 ships of 20.6 mdwt registered in the Marshall Islands – a flag with a legal backdrop patterned on U.S. Owners. Separately, UNCTAD’s report also shows that 46 percent of deadweight under the Panamanian register is linked to Japanese ownership. Likewise, the Liberian flag has strong connections with Germany and Greece, with these two nations together comprise more than 51% of deadweight under the Liberian flag. The data also links flags to vessel types and in this case the oil tanker market seems to be dominated by Liberia, Panama and the Marshall Islands. Table 1 depicts U.S. control of tonnage under various flags. Table 2 Depicts ownership control of tonnage in various major flags.
At one time, the open registries were easy targets for accusations of lax safety and other shortcomings. Decades of regulatory harmonization in conjunction with a strengthened role for the International Maritime Organization (IMO), have made such assertions largely a thing of the past. This combined with the oversight of the world’s major classification societies, plus close ties with major industrial and/or maritime nations have tightened maritime safety and compliance to arguably its best performance ever.

Performance
The choice of registry is somewhat subjective; these decisions reflect varying doses of tradition and economic practicality. Nevertheless, some are clearly better than others. The International Chamber of Shipping (ICS), a London-based body representing a large percentage of global shipowners, offers a “Flag State Performance Table.” The indicators, with a clear “use with care” disclaimer, come in the form of green (positive) and red (potentially negative) ratings in several major categories. The algorithm for coloring the boxes is derived from results of Port State Control (deficiencies and detentions), ratification of major maritime conventions, reliance on IACS (the major, recognized classification societies) for surveys, vessel age, STCW considerations and attendance at IMO meetings.
In ratings of more than 100 registries, Liberia, Greece, Japan and the Marshall Islands earn solid green rows on the ICS tables, along with a number of northern European flag states (and UK-linked offshore registries). The Paris MoU, a major Port State Control agreement, offers a “Ship Risk Profile Calculator” (also with a legal disclaimer); a list of important variables includes criteria of whether the flag appears on White (best), Grey or Black lists (worst), as well as whether the ship’s registry is audited by the IMO. The age of the ship also matters; one variable in the Calculator is whether the ship is more than 12 years old.
With a preponderance of older tonnage, and hence more detentions, the U.S. flag finds itself in the middle category – the Grey list, albeit near the cusp of the White List. The dubious distinction earns U.S. flag operators a measure of admonition from its own Coast Guard, enhanced scrutiny and more frequent inspections at foreign ports. It also underscores the reality that even a registry from a major industrialized country that espouses all the right metrics for ocean borne commerce can fall well short of what is considered to be satisfactory performance.  The Marshall Islands Registry is an excellent case in point. William Gallagher, President of International Registries Inc., and providers of administrative and technical support to the Republic of the Marshall Islands (RMI) registry, told MarPro recently, “Those vessels operating under the RMI flag achieve the highest ratings in the port State control international rankings. The RMI is the only major open registry to be included on the White Lists of both the Paris and Tokyo Memorandums of Understanding (MoUs) and to hold Qualship 21 status with the United States Coast Guard (USCG) for nine consecutive years.”

Minutia: Don’t get lost in the Weeds
Maritime statistics are full of minutia and it’s easy to get lost in them. Likewise, discussions of maritime policy and vessel flagging tend to degenerate into posturing, politics and dogma which engender a different type of confusion. At a very high level, it is abundantly clear that the most demanding movers of cargo in the oil and energy businesses trust annual cargo movements in the billions of tons of commodities to “flags of convenience.” Bottom line: the days of “rust buckets” are long gone. Today’s tankers and other vessels tasked with dangerous cargoes and tasks, are mainly flagged in offshore registers, where they provide critical and trusted links in the energy supply chain. 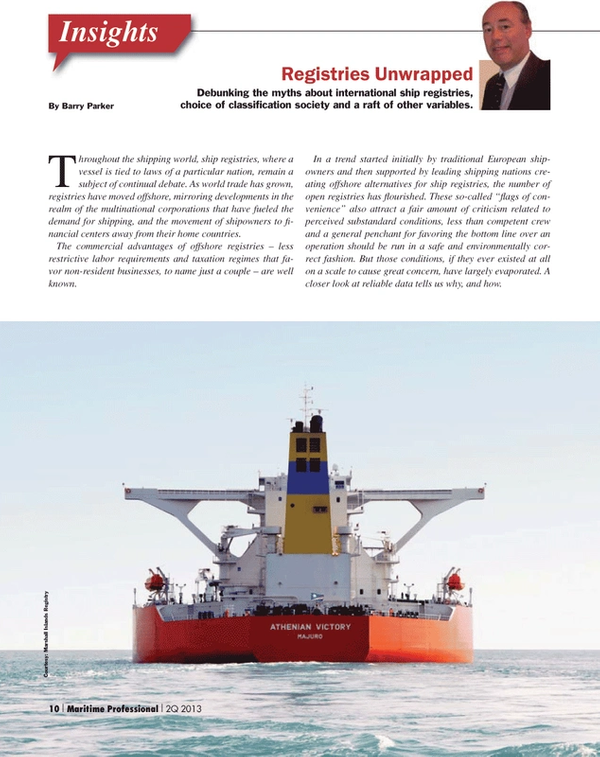