Almost three years since assuming command of the United States Coast Guard, Admiral Robert Papp still insists that his service will not be focusing on additional changes – not under his command. The reshuffling of organizational deckchairs, moves towards one side of the mission to another or any other changes to how the Coast Guard operates, are a thing of the past. But, are they really? An April visit with the Commandant, our first in two years, revealed that if the mantra stayed the same, some of the underlying action did not. That’s not to say the Coast Guard is any less ready to respond to security threats or to natural or manmade disasters. What it does mean is that Papp has quietly set the service on a course that values both sides of the Coast Guard mission sets – prevention and response – on equal footing. Along the way, a subtle shift in Arctic strategy has also emerged. Some of that is a function of the ongoing budget battles. The rest, refreshingly, is a new thought process on what’s possible, what’s absolutely necessary and a different way to get it all done. The last part is all Papp.

Change
Papp begins by saying simply, “We are not going to focus on any more changes. We are going to focus on improving ours processes. And lock these down.” The key to improving the Coast Guard, he said, lies in modernizing the support side of the equation – the engineers, the logisticians, the comptrollers. During the steep cuts of the 1990’s, that group had withered away. “That’s why we failed at Deepwater so miserably – we lost our acquisition expertise because we cut the support side. We failed our audit and so we took the support side improvements that had been started under Admiral Allen and we locked that down. We now have a deputy commandant for mission support. What we’ve come up with is a new, responsive, accountable support system.”

Culture
Papp talks about external events that, in his words, involve “the pendulum that would swing from one side to the other; depending on what the most recent crisis entailed.” The Exxon Valdez oil spill and the push towards oil spill response, as well as the terrorist attacks of September 11 which necessitated a heavily weighted emphasis to the security aspect of Coast Guard operations are perfect examples. “Some people make the case – the marine industry, in fact – that we had lost our focus on regulatory procedure and inspection. They were right about that and we have brought that back along.”
Papp also makes reference to the emergence of what he characterizes as “separate and distinct cultures – some would call them silos – within the Coast Guard.” The silos, he insists, only separate the wide range of missions. “What I have tried to do is help the service understand how and why all of these cultures must integrate in order for the Coast Guard to be successful in all of our missions.”
Papp cites the four missions that came together to form today’s Coast Guard – the revenue cutter service, the lifesaving service, the lighthouse service and the bureau of marine inspection. “We were integrated to give better return on investment to the American people. Buoy tenders are often called upon to break ice or do migrant operations or fishery patrols. If you lose the lighthouse service, for example, you lose that economy of scale.”

Prevention
Recalling his proudest moment(s) as Commandant, Papp without hesitation mentions the response to hurricane Sandy. Recognizing those who had flown out and recovered the 14 survivors from the Bounty, and without taking anything away from the heroic rescue itself, he also says, “It dawned on me that those 14 people may have not been saved if Coast Guard regulations did not require them to have survival suits, liferafts or require mariners to be licensed and trained. Those things are just as important as the people who go out into the middle of the night to rescue them.” Furthermore, he said, “The better that we do these prevention/regulatory activities, the less frequently we have to send people out into dangerous situations.”
With regard to the Coast Guard’s regulatory missions, Papp says flatly, “I find this fascinating. As a ship operator, I wasn’t involved in this aspect of our missions for most of my career. But, these regulations are so important to what we do. It’s not supposed to be fast. The only thing I’ve ever seen go rapidly was security in the wake of 9/11. Some people would say we didn’t get some things right and if so, that’s a function of the speed of that process. We’ve brought more people in to the regulatory process, but more importantly, we are training them. And, we’ve brought our average time span for the regulatory process down from six to four years. We need to listen to everyone and make compromises where necessary. That, by its nature cannot always be speedy. Papp also admits that the consolidation of the Regional Exam Centers to West Virginia to gain efficiencies was a good idea, but that it took too much away from the regional offices. “You still need to have a face out there that people can deal with,” he said, but also insisted, “From my experience, credentialing experiences that I hear about have been more positive and indeed mostly positive.”

The Arctic
Admiral Papp has his own approach to the Coast Guard’s Arctic responsibilities. The Commandant is, if not happy, satisfied that he has done what he can. He freely admits that it is more than he had hoped to accomplish when he took command some three years ago. A new Arctic strategy is now in play – now sitting on DHS Secretary Janet Napolitano’s desk, awaiting action. It is here where Papp diverges from past policy.
”The previous study said: you need ‘X’ number of medium and heavy breakers. It is an objective, but we are so far from the objective that it really doesn’t matter. What we need to do is to get a comprehensive national strategy in the Arctic right now. The Coast Guard is going to lead on this. You have to have a strategy before you ask for resources to get the job done. We’ll start getting some other agencies involved, but for me to ask for icebreakers – that won’t get traction – not until we as a nation decide what we want.”
Papp’s strategy involves measurable goals. “We set the initial goal of getting the Polar Star reactivated. After operational testing, we expect to send Polar Star up to the Arctic sometime early summer while there is still some decent ice up there. After that, we’ve committed to the National Science Foundation to break out Macmurdo in Antarctica.” Along with this, Papp’s wish list included getting the icebreaker money put back into the Coast Guard’s budget (done!) and to make the case for a new icebreaker. “Maybe I set my goals too modestly. The President in the new FY-13 budget approved funds for the design and requirements for the new icebreaker. Congress is now requiring us to do a business analysis to see what can be done with Polar Sea – which we intended to decommission and use for parts. They want to know if it is feasible and economical to activate it. We’re trying to determine that now.”
According to Papp, the nation needs assured access to assert sovereignty in Arctic waters. But, he says, “Everybody says you have to have icebreakers and (yes) you have to have them when you need access, but human activity only occurs when the ice recedes. You don’t need a single mission hull, you need the national security cutter. This is the optimal resource for conducting operations, because we don’t have shore infrastructure up there. You’ve got a command center on the national security cutter that is superior to any shoreside center and you also have an air station. And you’ve got three boats and crew and all the command and control capabilities that goes along with it.”
What Papp is unwilling to do is to build Arctic shoreside infrastructure because it is expensive to build and there is not yet any national consensus on the way forward. In the meantime, the Coast Guard will do what it has always done best. “We have mobile, versatile assets that we can move around when the mission is there. The oil companies aren’t going up there until ice recedes, nor are the cruise ships. That’s when we need search and rescue, pollution response, security type operations. There’s going to be winter ice up there for the foreseeable future. That gives us a couple of decades to do seasonal operations and continue to learn and make plans for permanent infrastructure.”

The “S” Word
There isn’t anything vague about Bob Papp’s policy when it comes to dealing with sequestration. Papp says simply, “We want to maintain our capability to respond to mission priorities. I have designated those as search and rescue and security operations.” Pressed on what specific missions he might have to cut first, he responded flatly, “I don’t know and I don’t want to advertise to adversaries where we may or may not be putting resources. For instance, if Haitians know there are no Coast Guard cutters out there, we may see more Haitians taking to the sea. To say I am cutting back on one particular mission is not wise. Beyond that, you just don’t know on a day-to-day basis what is going to happen.”

The Big Picture
Keeping the recapitalization going is the one thing that keeps Papp awake at night. “We’re hoping to get all eight of the national security cutters built. We need all eight because they are replacing 12 hulls. The new budgets include money for number 6 and lead money to start getting parts for number 7. You’ll have to wait for the FY14 budget, but I can tell you I’m happy with how that is shaping up. Not all the money to do everything I want to do as commandant, but we are getting are most important issues moving forward.” You have to like the guy. It’s all substance; no flash. In other words, the perfect guy for the Coast Guard. 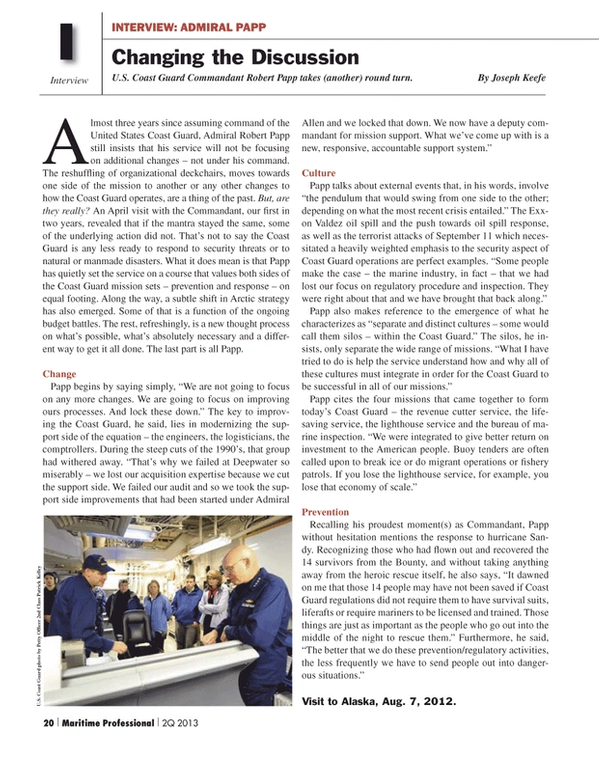