Maritime Mergers and Acquisitions: Oil & Gas to the Forefront

Maritime oil and gas business segments have exhibited mixed results in the past 12 months. In the United States, offshore business is slowly recovering from the devastating Macondo spill that resulted in an exodus of drilling assets to foreign shores. Service and equipment providers are showing cautious optimism as the number of drill rigs under contract has risen substantially, along with day rates. In this report, Figure 1 shows the recovery in the active Gulf of Mexico rig count to pre-Macondo levels, with the point of the accident circled in green.
Orders for new construction are surging for offshore floating production and storage vessels, as well as for petroleum tank barges. With the notable exception of oil tanker rates, most indicators in the oil and gas sectors have been on the rise for the marine industry in recent months. The conditions for mergers and acquisitions activity are improving very gradually along with the offshore market, as large players have strengthened their balance sheets and strategic paths become more clearly defined. A good deal of consolidation has already taken place in the inland tug-barge sector, and a slow increase in deal pace has emerged among offshore product and service providers.

Oil & Gas Product Company Deals
On the product front, Texas-based Newpark Resources acquired Alliance Drilling Fluids for $53 million. As with a large number of M&A transactions across all industries, this deal narrowly made the deadline before the capital gains tax increase took effect, closing on December 31, 2012. A few months earlier, publicly-traded Oil States International (OIS) acquired high-pressure valve and manifold component maker Piper Valve Systems of Oklahoma for $48 million. Piper’s technology complements Oil States’ offshore products segment and enables them to integrate valve systems in subsea applications. In a larger deal announced last August, polycrystalline diamond drill bit manufacturer Ulterra Drilling Technologies accepted a $325 million offer from Portland-based Esco Corp. Ulterra has been expanding their operations in the Gulf of Mexico region and gives Esco a solid foothold in oil & gas to complement its mining presence.
General Electric (GE) has been on an acquisition campaign to expand its oil and gas business, which is now the mega-company’s fastest growing unit and accounts for 10% of its revenue. GE acquired 31-person Naxys in Bergen Norway late last year. Naxys has built a niche providing subsea leak detection and condition monitoring sensors based on passive acoustic technology. At the other end of the size spectrum, GE paid $2.98 billion for oil pump maker Lufkin Industries in April 2013. Also in April, Ecolab Inc. closed a $2.3 billion acquisition of Champion Technologies and related company Corsicana Technologies. The deal marks continued diversification for food and beverage-focused Ecolab following their $8.1 billion merger with water and energy services provider Nalco Holding Company in 2011. The new acquisition results in the creation of Nalco Champion, which serves the oil drilling, petrochemical and specialized water treatment industries.

Service Company Deals
On the services side, French Geosciences leader CGG Veritas acquired the geoscience division of Fugro Worldwide for $1.55 billion. The complex deal included the establishment of a joint venture, a commercial agreement for CGG Veritas to sell Fugro’s multi-client data, which remains owned by Fugro, and a global preferred supplier agreement. Another multifaceted deal was Freeport-McMoRan Copper and Gold (FCX)’s announcement of intent to acquire Plains Exploration & Production Co. (PXP) along with McMoRan Exploration Company (MMR) for as much as $20 billion including assumed debt in December. To begin with, Freeport and McMoRan split in the 1990’s, but maintained a close relationship and share six board members. Many investors questioned the decision by the world’s largest public Copper producer to get back into risky oil and gas assets and further complications have emerged: falling commodity prices have hit Freeport shares hard and positive results from a new Plains project in the Gulf may push the final price for PXP out of reach. Plains shareholders are set for a special vote on the deal as of this writing.
On the simpler side, Harvey Gulf International Marine acquired Bollinger’s Bee Mar OSV operating company for $243 million last year, and McDermott International (MDR) recently announced the acquisition of DeepSea, a subsea engineering and project management firm based in London. Houston-based McDermott provides engineering, construction and project management for complex offshore oil and gas projects.

Inland and Coastal
The inland and coastal petrochemical transportation markets recovered more quickly than other marine segments in the aftermath of the financial crisis and gulf coast disaster. We reviewed the numerous recent acquisitions by Kirby Corp (KEX) in the Q1 edition of Maritime Professional, but it is worth noting that even after the Penn Maritime and Allied Transportation deals that totaled more than $400 million, they may still be scouting the market. David Grzebinski, Executive Vice President and Chief Financial Officer of Kirby, said, “We would still like to do some more acquisitions. We think in the coastwise space, there’s still some opportunity because where they are in the business cycle.”
Some industry players speculate that there are more deals on the way in the tug and barge segment.  The most significant recent transaction in the space was the acquisition of Third Coast Towing by NGL Energy Partners (NGL), a publicly-traded master limited partnership, for $43 million. Baird Equity Research’s Ethan Bellamy notes that NGL has executed $1.8bn in acquisitions since its IPO in May of 2011, and the company sees more opportunity in the energy sector.

Market Movements
Oil and gas has perhaps been the definitive “boom and bust” industry throughout its history. As we examine the maritime-related segments of this complex industry, we see some clear patterns that have emerged since the financial crisis in 2007-2008. As measured by our chosen public stock indices shown in Figure 2, the three major segments – tankers, drilling and inland/offshore workboats – have diverged with respect to financial performance. All of the segments were damaged by both the financial meltdown and the BP oil spill and subsequent drilling moratorium.
After each downturn, companies in the workboat segment were able to capitalize on their flexibility to control capacity and redeploy assets to busy oil regions around the world. Thus, these public companies in the tug/barge and OSV markets have steadily risen to the top of our three indices. The drilling companies, with their heavy capital requirements and inability to re-locate quickly have suffered a more prolonged recession. At the bottom of the graph, sea-going petroleum tanker owner-operators have experienced a disastrous five-year run. Burdened with systemic overcapacity and challenging debt markets, the tanker segment have seen mostly “bust” over this period. After a brief period of optimism last spring, tanker rates have recently plummeted again due to a commodity slump and the market is in a “state of panic” according to Jens Martin Jensen, chief executive officer of Bermuda-based Frontline.
Though it is difficult to classify any piece of this market as a “boom” at this time, we expect some strategic segments to build strength and generate M&A activity: specialty drilling equipment and chemicals; subsea sensors and leak monitoring services; and offshore service providers catering to the growing rig fleet in the Gulf of Mexico. As for the bigger picture, we will continue to monitor the financial scene and look for positive signs in the second half of the year. 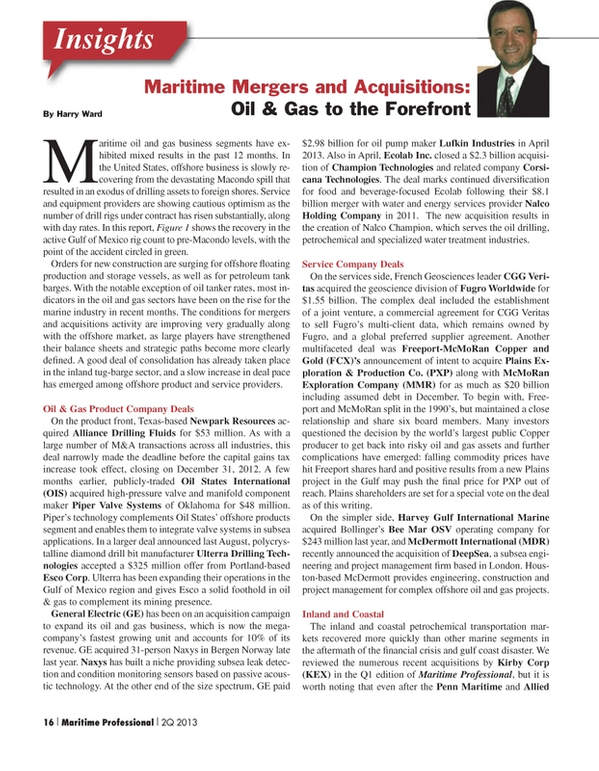