As a marine contractor you know much of the work you do – whether it be dock or pier construction, bulkhead or riprap construction, or waterway dredging and beach replacement – is done using specialized watercraft. And you know enough to buy Protection & Indemnity insurance to protect you for liability for bodily injury and property damage caused by your watercraft. But what about your liability after your construction project is completed?  Yes, your Completed Operations hazard. That’s covered by your General Liability policy, right?  Well, maybe.
One area that marine contractors need to pay particular attention to is their General Liability insurance policy. Coverage for Completed Operations Liability provides insurance for claims resulting after a construction project is completed. This coverage is usually found in the Bodily Injury and Property Damage Liability section of the policy. That is also the same section of the policy where you will find watercraft exclusion. The 2007 ISO CGL policy watercraft exclusion states; “Bodily injury” or “property damage” arising out of the ownership, maintenance, use or entrustment to others of any watercraft owned or operated by or rented or loaned to any insured.
For a marine contractor that relies on watercraft to perform their specialized operations such a exclusion has been known to cause some real problems, the most infamous being a insurance coverage dispute following the Great Chicago Flood of 1992. This is a 20-year-old case that is still influencing marine insurance coverage.

Courts and Conflicts
In October 1991, the city of Chicago and Great Lakes Dredge and Dock Co completed a project on the Kinzie Street Bridge. As part of the project, new pilings had to be driven into the river floor.  A crane barge operated by Great Lakes was driving new pilings for the bridge project when it accidentally punched into an unused service tunnel passing beneath the Chicago River. These abandoned tunnels were previously used to deliver coal underground to Chicago’s skyscrapers. On April 13, 1992, months after the piles were driven, the tunnel’s roof finally caved in causing the waters of the Chicago River to rush through the tunnel system and into the buildings’ basements.  Damage has been estimated at more than $300 million, although some estimates set damage as high as $1.5 billion.
The first conflict to be litigated was venue, and the case went to the United States Supreme Court in Jerome B. Grubart, Inc. v. Great Lakes Dredge & Dock Co. - 513 U.S. 527 (1994), which ruled that since the work was being done by a vessel in the navigable waters of the Chicago River, Admiralty law applied.
Next, came the insurance companies: Great Lakes’ GL insurer argued that the coverage for operation performed was not covered under its GL policy because of various exclusions in the policy, most notable the watercraft exclusion. The insurer argued that the loss should be paid by its P&I insurers.   The P&I insurers argued that the construction project had been completed months earlier, that there weren’t any watercraft in the area at the time of the accident, and that the P&I policy does not provide any completed operations protection.
Many arguments in insurance disputes (like this one) center on exclusions. An exclusion creates an exception from coverage that would otherwise be available: in this case a watercraft exclusion; and the work was performed from a owned watercraft.

Eliminating Gray Areas
Insurance policy language can often be confusing and therefore, is subject to interpretation, over and over again.  It is important that companies know their policies, identify exclusions and understand where gaps in their insurance coverage may lie. Insurers do not like to spend their days in court or tie up claims staff to argue over language. More insurers are working to make their coverage as clear and understandable as possible and minimize gray areas that lead can lead to courtroom battles.
Exclusions serve a variety of purposes for both an insurer and its customer. For one, not every customer has the same exposures and, therefore, it is not fair to charge someone needlessly for exposures they don’t have. Exclusions also prevent coverage under one policy when it should be covered elsewhere. Policies also have exclusions because some exposures just aren’t or shouldn’t be insurable such as war or nuclear reaction.
In the case of the Great Chicago Flood, GL insurers ended up paying the loss, but is there an easier way that to go through expensive coverage litigation?
When insuring the General Liability of specialized operations like marine contractors, it is important to eliminate the gray areas. While many GL insurers are unwilling to delete the policy’s watercraft exclusion, insurers should be willing to amend the watercraft exclusion so the exclusion does not apply to the completed operations hazard for work preformed from watercraft. XL Group’s Marine business’ Marine General Liability policy, for example, uses “This watercraft exclusion does not apply to:  Liability arising out of the ‘products-completed operations hazard’ of the ‘insured’s work’ performed from watercraft; owned by, or chartered, leased, rented or loaned to an insured.” An affirmative coverage stance like amending the watercraft exclusion for a marine contractor will clarify the language in a GL policy, and could have avoided the confusion that the City of Chicago and Great Lakes Dredging and Dock saw arise from that situation.
As with every business contract, it is important for a firm to carefully understand the terms and conditions of its insurance policies to know what its insurance will and will not cover so that gaps in insurance coverage can be addressed appropriately. 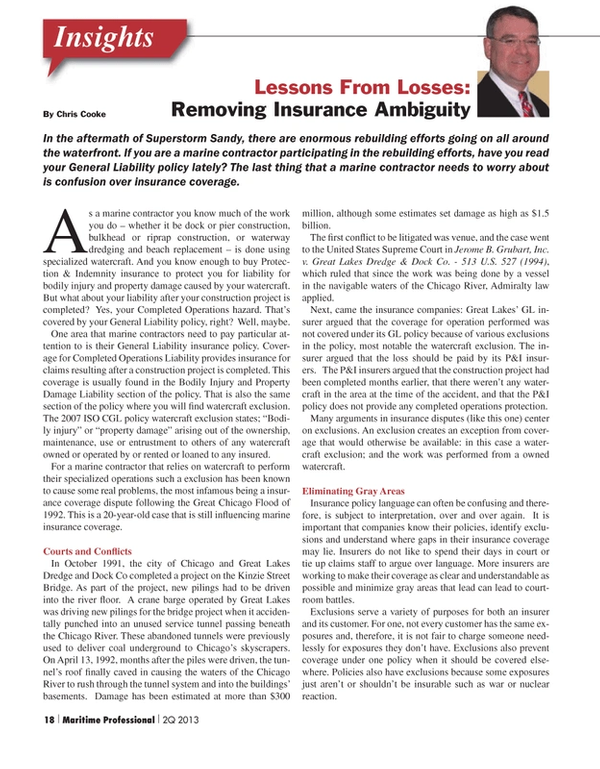