Implementing VIDA: The Next Step Forward

The tugboat, towboat and barge industry has a profound impact on America’s economy, security and quality of life, safely moving over 760 million tons of vital commodities every year and annually generating over $33 billion in U.S. GDP. Those numbers are a tribute to the hardworking men and women who ply our nation’s waterways, as well as a testament to the national scope of a critical industry whose operations, and contributions, do not stop at state lines.

The Department of Homeland Security recognized the centrality of maritime commerce to our national economy in the early days of the COVID-19 pandemic, when the Cybersecurity and Infrastructure Security Agency (CISA) identified maritime workers as part of the essential critical infrastructure workforce, a federal recognition that maritime employees needed to continue working and needed to be able to travel across jurisdictions to report to their jobs.

Just as it would have been devastating to the industry – and to the nation – if states and municipalities had ignored federal guidance and set up a patchwork of regulations hindering mariners’ ability to report to work and keep cargo moving during a pandemic, a patchwork of inconsistent state or local regulations established for other reasons is also detrimental to the marine transportation system and the national economy.

Congress recognized this reality when it passed the Vessel Incidental Discharge Act (VIDA) in 2018. Prior to VIDA, vessel discharges were regulated by two federal agencies and 25 states, requiring vessels traversing the waters of multiple states – a frequent, routine occurrence – to contend with a maze of conflicting, overlapping and confusing vessel discharge regulations and subjecting vessel operators to civil and criminal penalties for noncompliance. This pre-VIDA framework not only had negative consequences for the efficient movement of cargo, but also for marine environmental protection, discouraging investment in the most sophisticated environmental technologies given the absence of assurance that they would satisfy regulatory requirements from one state to the next.

VIDA fixes this broken system by assigning joint responsibility for vessel discharge regulation to the Environmental Protection Agency and U.S. Coast Guard, in consultation with the states. Under VIDA, the Environmental Protection Agency (EPA) is responsible for setting vessel discharge performance standards while the Coast Guard is responsible for regulations governing the design, installation and use of equipment required to meet the standards, as well as inspection, monitoring, reporting and recordkeeping requirements. This is a commonsense solution that streamlines a highly convoluted process while ensuring high standards of environmental protection, which explains why VIDA was enacted into law with bipartisan support even during an election year.

However, congressional passage of VIDA did not by itself fix the problems the legislation aims to address, and EPA and Coast Guard are now in the midst of a two-step rulemaking process to implement Congress’s directive. Until then, the status quo ante remains in place, with vessel owners not yet benefitting from the relief VIDA provides. So, what needs to be done now?

Under VIDA, EPA has until December 2020 to promulgate regulations setting performance standards for vessel discharges. In October, the EPA Administrator signed off on a proposed rule, which will be published in the Federal Register by month’s end. Industry, states, and environmental advocacy organizations are all working hard to review and provide comments on the proposal, after which EPA will finalize the rulemaking. When the EPA rule is complete, the Coast Guard will take the baton, with a statutory deadline of December 2022 to complete its piece of the regulatory process.

It will be critical that the Coast Guard hits the ground running and maintains a brisk pace to keep this important rulemaking on track.

The legislative intent behind VIDA was to fix a dysfunctional approach to vessel discharge regulation by creating a uniform system of national standards – one that keeps vital maritime commerce moving and better protects the marine environment by enabling vessel operators to invest in new technologies with confidence. Long before the COVID-19 pandemic emerged, policymakers on both sides of the aisle recognized the importance of replacing an ill-fitting patchwork with a more effective national approach to vessel discharge regulation.

The need to bring to fruition the improved regulatory system directed by VIDA has taken on even greater urgency as our nation seeks to recover from the economic disruption caused by the COVID-19 pandemic. Vessel owners, shippers, and the economy itself can ill afford the additional costs and inefficiencies associated with a fragmented and duplicative regulatory regime.

EPA has gotten off to a strong start toward implementation of VIDA’s framework for sensible, cohesive vessel discharge regulations; it needs to move quickly to digest public comments, refine its proposal, and publish a final rule this year. The next leg of the race will be run by the Coast Guard, where leadership and focus will be imperative to getting this long-awaited solution across the finish line. 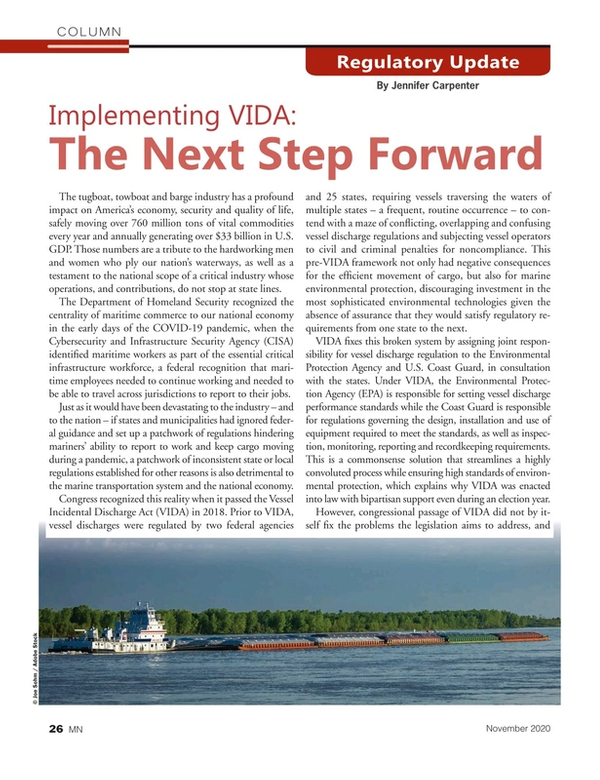