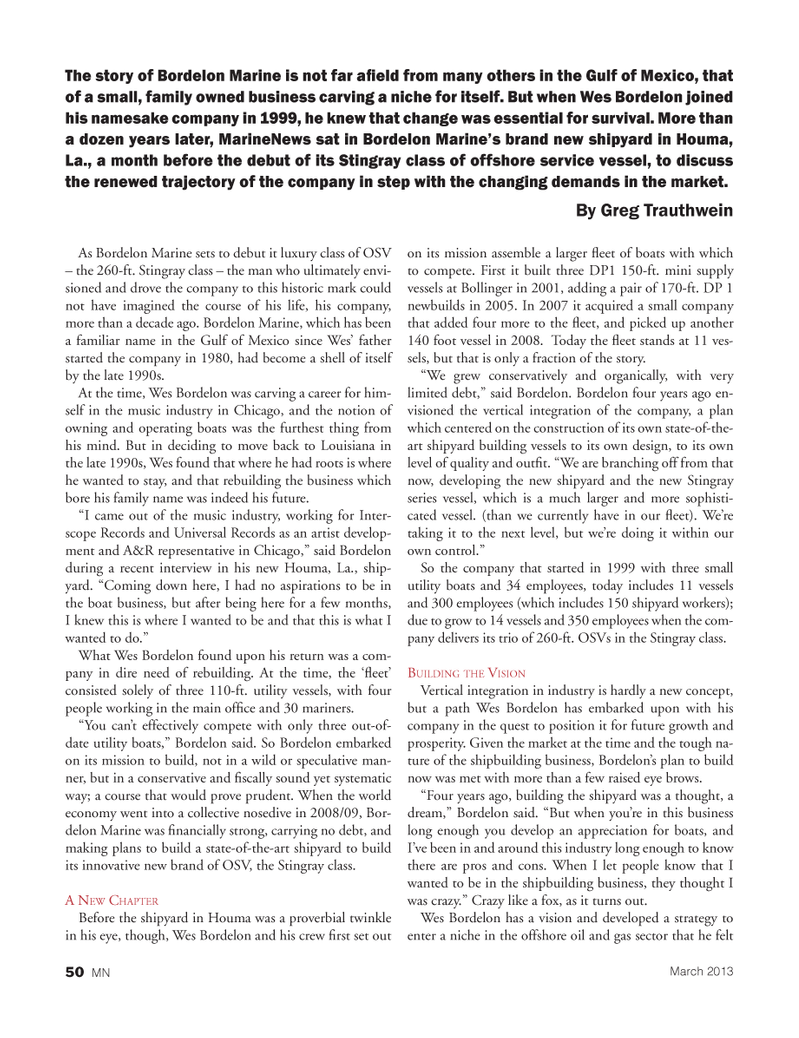 As Bordelon Marine sets to debut it luxury class of OSV ? the 260-ft. Stingray class ? the man who ultimately envi- sioned and drove the company to this historic mark could not have imagined the course of his life, his company, more than a decade ago. Bordelon Marine, which has been a familiar name in the Gulf of Mexico since Wes? father started the company in 1980, had become a shell of itself by the late 1990s. At the time, Wes Bordelon was carving a career for him- self in the music industry in Chicago, and the notion of owning and operating boats was the furthest thing from his mind. But in deciding to move back to Louisiana in the late 1990s, Wes found that where he had roots is where he wanted to stay, and that rebuilding the business which bore his family name was indeed his future. ?I came out of the music industry, working for Inter- scope Records and Universal Records as an artist develop- ment and A&R representative in Chicago,? said Bordelon during a recent interview in his new Houma, La., ship- yard. ?Coming down here, I had no aspirations to be in the boat business, but after being here for a few months, I knew this is where I wanted to be and that this is what I wanted to do.? What Wes Bordelon found upon his return was a com- pany in dire need of rebuilding. At the time, the ? eet? consisted solely of three 110-ft. utility vessels, with four people working in the main of ce and 30 mariners. ?You can?t effectively compete with only three out-of- date utility boats,? Bordelon said. So Bordelon embarked on its mission to build, not in a wild or speculative man- ner, but in a conservative and  scally sound yet systematic way; a course that would prove prudent. When the world economy went into a collective nosedive in 2008/09, Bor- delon Marine was  nancially strong, carrying no debt, and making plans to build a state-of-the-art shipyard to build its innovative new brand of OSV, the Stingray class. A NEW CHAPTERBefore the shipyard in Houma was a proverbial twinkle in his eye, though, Wes Bordelon and his crew  rst set out on its mission assemble a larger  eet of boats with which to compete. First it built three DP1 150-ft. mini supply vessels at Bollinger in 2001, adding a pair of 170-ft. DP 1 newbuilds in 2005. In 2007 it acquired a small company that added four more to the  eet, and picked up another 140 foot vessel in 2008. Today the  eet stands at 11 ves- sels, but that is only a fraction of the story. ?We grew conservatively and organically, with very limited debt,? said Bordelon. Bordelon four years ago en- visioned the vertical integration of the company, a plan which centered on the construction of its own state-of-the- art shipyard building vessels to its own design, to its own level of quality and out t. ?We are branching off from that now, developing the new shipyard and the new Stingray series vessel, which is a much larger and more sophisti- cated vessel. (than we currently have in our  eet). We?re taking it to the next level, but we?re doing it within our own control.? So the company that started in 1999 with three small utility boats and 34 employees, today includes 11 vessels and 300 employees (which includes 150 shipyard workers); due to grow to 14 vessels and 350 employees when the com- pany delivers its trio of 260-ft. OSVs in the Stingray class. BUILDING THE VISIONVertical integration in industry is hardly a new concept, but a path Wes Bordelon has embarked upon with his company in the quest to position it for future growth and prosperity. Given the market at the time and the tough na- ture of the shipbuilding business, Bordelon?s plan to build now was met with more than a few raised eye brows. ?Four years ago, building the shipyard was a thought, a dream,? Bordelon said. ?But when you?re in this business long enough you develop an appreciation for boats, and I?ve been in and around this industry long enough to know there are pros and cons. When I let people know that I wanted to be in the shipbuilding business, they thought I was crazy.? Crazy like a fox, as it turns out. Wes Bordelon has a vision and developed a strategy to enter a niche in the offshore oil and gas sector that he felt The story of Bordelon Marine is not far a Þ eld from many others in the Gulf of Mexico, that of a small, family owned business carving a niche for itself. But when Wes Bordelon joined his namesake company in 1999, he knew that change was essential for survival. More than a dozen years later, MarineNews sat in Bordelon Marine?s brand new shipyard in Houma, La., a month before the debut of its Stingray class of offshore service vessel, to discuss the renewed trajectory of the company in step with the changing demands in the market. By Greg Trauthwein March 2013 50 MNMN March2013 Layout 50-65.indd 50MN March2013 Layout 50-65.indd 503/4/2013 3:51:47 PM3/4/2013 3:51:47 PM