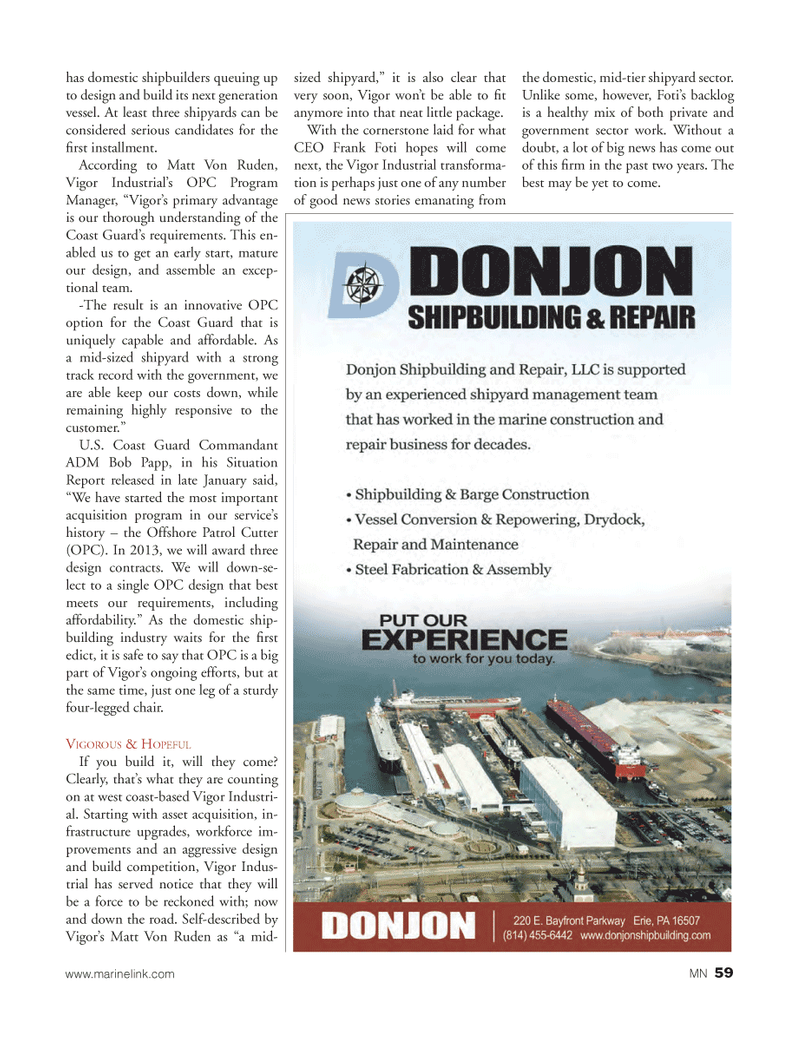 has domestic shipbuilders queuing up to design and build its next generation vessel. At least three shipyards can be considered serious candidates for the Þ rst installment. According to Matt Von Ruden, Vigor IndustrialÕs OPC Program Manager, ÒVigorÕs primary advantage is our thorough understanding of the Coast GuardÕs requirements. This en- abled us to get an early start, mature our design, and assemble an excep- tional team. -The result is an innovative OPC option for the Coast Guard that is uniquely capable and affordable. As a mid-sized shipyard with a strong track record with the government, we are able keep our costs down, while remaining highly responsive to the customer.Ó U.S. Coast Guard Commandant ADM Bob Papp, in his Situation Report released in late January said, ÒWe have started the most important acquisition program in our serviceÕs history Ð the Offshore Patrol Cutter (OPC). In 2013, we will award three design contracts. We will down-se- lect to a single OPC design that best meets our requirements, including affordability.Ó As the domestic ship- building industry waits for the Þ rst edict, it is safe to say that OPC is a big part of VigorÕs ongoing efforts, but at the same time, just one leg of a sturdy four-legged chair. VIGOROUS & HOPEFUL If you build it, will they come? Clearly, thatÕs what they are counting on at west coast-based Vigor Industri- al. Starting with asset acquisition, in- frastructure upgrades, workforce im- provements and an aggressive design and build competition, Vigor Indus- trial has served notice that they will be a force to be reckoned with; now and down the road. Self-described by VigorÕs Matt Von Ruden as Òa mid- sized shipyard,Ó it is also clear that very soon, Vigor wonÕt be able to Þ t anymore into that neat little package. With the cornerstone laid for what CEO Frank Foti hopes will come next, the Vigor Industrial transforma- tion is perhaps just one of any number of good news stories emanating from the domestic, mid-tier shipyard sector. Unlike some, however, FotiÕs backlog is a healthy mix of both private and government sector work. Without a doubt, a lot of big news has come out of this Þ rm in the past two years. The best may be yet to come. www.marinelink.com MN 59MN March2013 Layout 50-65.indd 59MN March2013 Layout 50-65.indd 593/4/2013 3:53:57 PM3/4/2013 3:53:57 PM