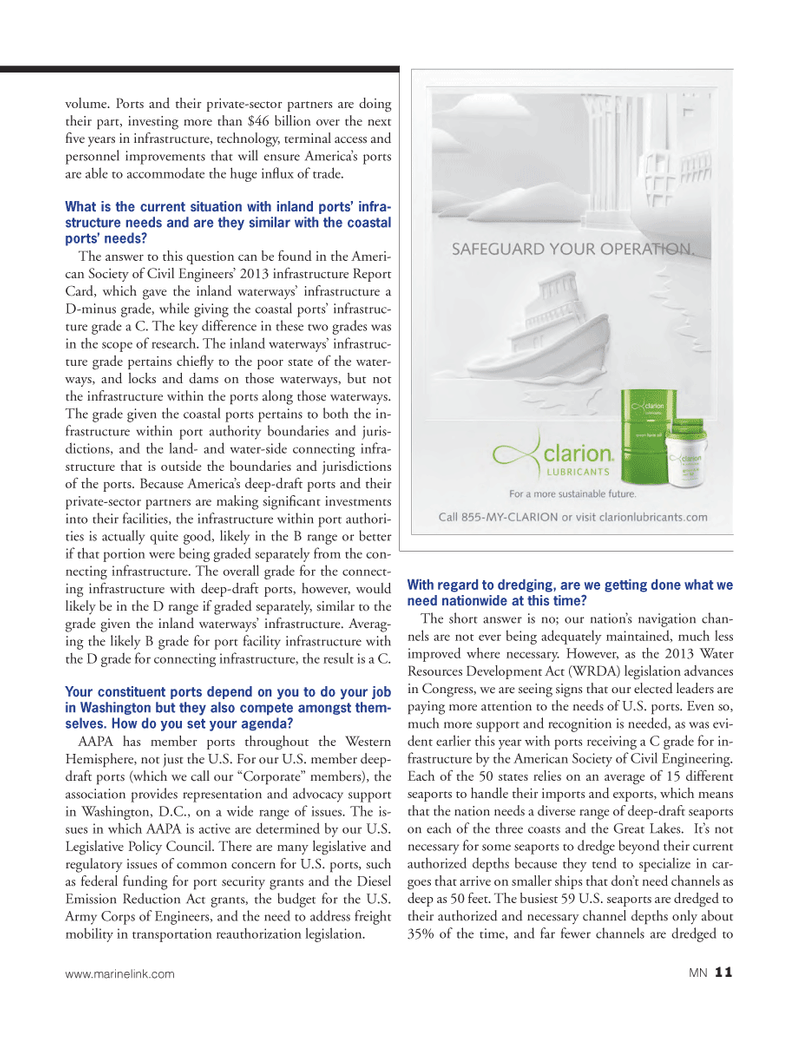 volume. Ports and their private-sector partners are doing their part, investing more than $46 billion over the next Þ ve years in infrastructure, technology, terminal access and personnel improvements that will ensure AmericaÕs ports are able to accommodate the huge inß ux of trade. What is the current situation with inland ports? infra- structure needs and are they similar with the coastal ports? needs? The answer to this question can be found in the Ameri- can Society of Civil EngineersÕ 2013 infrastructure Report Card, which gave the inland waterwaysÕ infrastructure a D-minus grade, while giving the coastal portsÕ infrastruc- ture grade a C. The key difference in these two grades was in the scope of research. The inland waterwaysÕ infrastruc- ture grade pertains chieß y to the poor state of the water- ways, and locks and dams on those waterways, but not the infrastructure within the ports along those waterways. The grade given the coastal ports pertains to both the in- frastructure within port authority boundaries and juris- dictions, and the land- and water-side connecting infra-structure that is outside the boundaries and jurisdictions of the ports. Because AmericaÕs deep-draft ports and their private-sector partners are making signiÞ cant investments into their facilities, the infrastructure within port authori- ties is actually quite good, likely in the B range or better if that portion were being graded separately from the con- necting infrastructure. The overall grade for the connect- ing infrastructure with deep-draft ports, however, would likely be in the D range if graded separately, similar to the grade given the inland waterwaysÕ infrastructure. Averag- ing the likely B grade for port facility infrastructure with the D grade for connecting infrastructure, the result is a C. Your constituent ports depend on you to do your job in Washington but they also compete amongst them- selves. How do you set your agenda? AAPA has member ports throughout the Western Hemisphere, not just the U.S. For our U.S. member deep- draft ports (which we call our ÒCorporateÓ members), the association provides representation and advocacy support in Washington, D.C., on a wide range of issues. The is- sues in which AAPA is active are determined by our U.S. Legislative Policy Council. There are many legislative and regulatory issues of common concern for U.S. ports, such as federal funding for port security grants and the Diesel Emission Reduction Act grants, the budget for the U.S. Army Corps of Engineers, and the need to address freight mobility in transportation reauthorization legislation. With regard to dredging, are we getting done what we need nationwide at this time? The short answer is no; our nationÕs navigation chan- nels are not ever being adequately maintained, much less improved where necessary. However, as the 2013 Water Resources Development Act (WRDA) legislation advances in Congress, we are seeing signs that our elected leaders are paying more attention to the needs of U.S. ports. Even so, much more support and recognition is needed, as was evi- dent earlier this year with ports receiving a C grade for in- frastructure by the American Society of Civil Engineering. Each of the 50 states relies on an average of 15 different seaports to handle their imports and exports, which means that the nation needs a diverse range of deep-draft seaports on each of the three coasts and the Great Lakes. ItÕs not necessary for some seaports to dredge beyond their current authorized depths because they tend to specialize in car- goes that arrive on smaller ships that donÕt need channels as deep as 50 feet. The busiest 59 U.S. seaports are dredged to their authorized and necessary channel depths only about 35% of the time, and far fewer channels are dredged to MN 11www.marinelink.com MN June2013 Layout 1-17.indd 11MN June2013 Layout 1-17.indd 115/30/2013 11:54:15 AM5/30/2013 11:54:15 AM