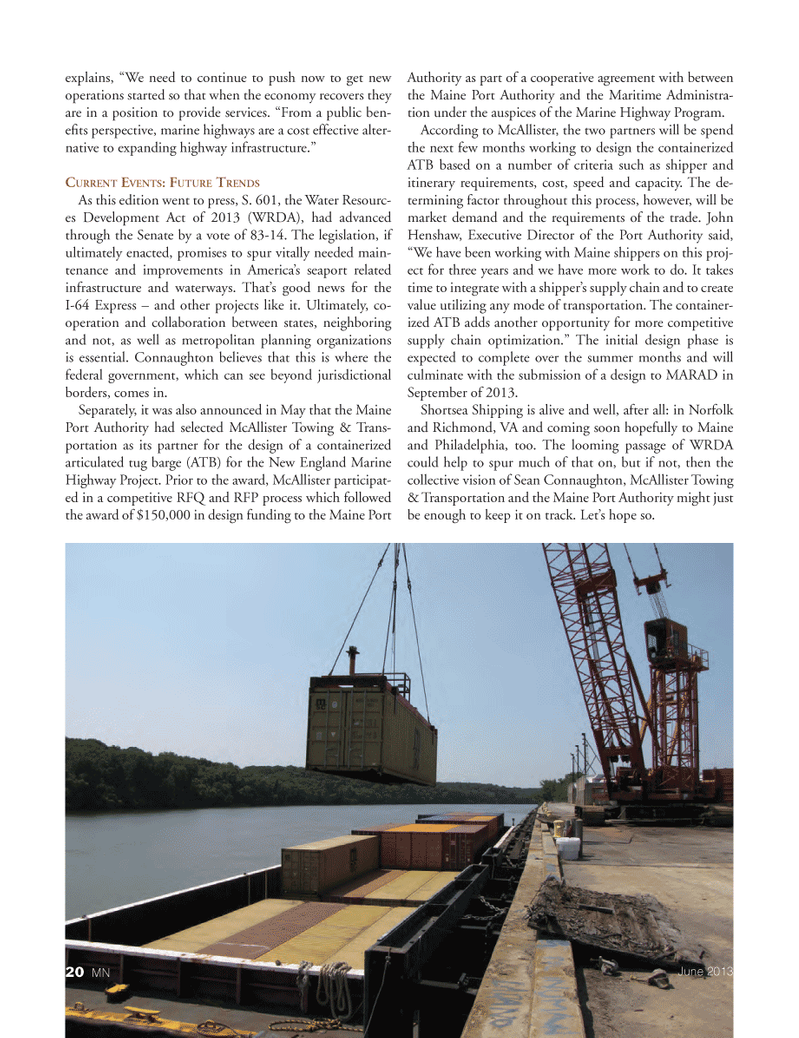 explains, ?We need to continue to push now to get new operations started so that when the economy recovers they are in a position to provide services. ?From a public ben- e ts perspective, marine highways are a cost effective alter- native to expanding highway infrastructure.? CURRENT EVENTS : FUTURE TRENDSAs this edition went to press, S. 601, the Water Resourc- es Development Act of 2013 (WRDA), had advanced through the Senate by a vote of 83-14. The legislation, if ultimately enacted, promises to spur vitally needed main- tenance and improvements in America?s seaport related infrastructure and waterways. That?s good news for the I-64 Express ? and other projects like it. Ultimately, co- operation and collaboration between states, neighboring and not, as well as metropolitan planning organizations is essential. Connaughton believes that this is where the federal government, which can see beyond jurisdictional borders, comes in. Separately, it was also announced in May that the Maine Port Authority had selected McAllister Towing & Trans- portation as its partner for the design of a containerized articulated tug barge (ATB) for the New England Marine Highway Project. Prior to the award, McAllister participat- ed in a competitive RFQ and RFP process which followed the award of $150,000 in design funding to the Maine Port Authority as part of a cooperative agreement with between the Maine Port Authority and the Maritime Administra- tion under the auspices of the Marine Highway Program. According to McAllister, the two partners will be spend the next few months working to design the containerized ATB based on a number of criteria such as shipper and itinerary requirements, cost, speed and capacity. The de- termining factor throughout this process, however, will be market demand and the requirements of the trade. John Henshaw, Executive Director of the Port Authority said, ?We have been working with Maine shippers on this proj- ect for three years and we have more work to do. It takes time to integrate with a shipper?s supply chain and to create value utilizing any mode of transportation. The container- ized ATB adds another opportunity for more competitive supply chain optimization.? The initial design phase is expected to complete over the summer months and will culminate with the submission of a design to MARAD in September of 2013. Shortsea Shipping is alive and well, after all: in Norfolk and Richmond, VA and coming soon hopefully to Maine and Philadelphia, too. The looming passage of WRDA could help to spur much of that on, but if not, then the collective vision of Sean Connaughton, McAllister Towing & Transportation and the Maine Port Authority might just be enough to keep it on track. Let?s hope so. June 201320 MNMN June2013 Layout 18-31.indd 20MN June2013 Layout 18-31.indd 205/30/2013 11:07:37 AM5/30/2013 11:07:37 AM