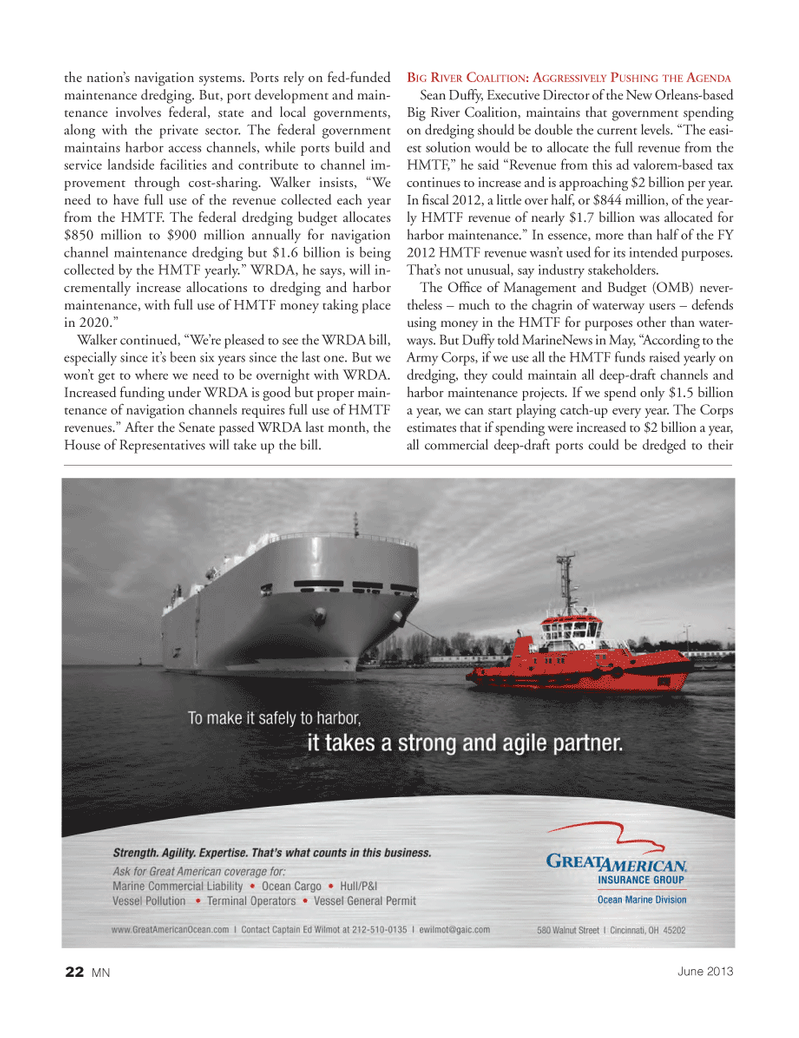 the nation?s navigation systems. Ports rely on fed-funded maintenance dredging. But, port development and main- tenance involves federal, state and local governments, along with the private sector. The federal government maintains harbor access channels, while ports build and service landside facilities and contribute to channel im- provement through cost-sharing. Walker insists, ?We need to have full use of the revenue collected each year from the HMTF. The federal dredging budget allocates $850 million to $900 million annually for navigation channel maintenance dredging but $1.6 billion is being collected by the HMTF yearly.? WRDA, he says, will in- crementally increase allocations to dredging and harbor maintenance, with full use of HMTF money taking place in 2020.?Walker continued, ?We?re pleased to see the WRDA bill, especially since it?s been six years since the last one. But we won?t get to where we need to be overnight with WRDA. Increased funding under WRDA is good but proper main- tenance of navigation channels requires full use of HMTF revenues.? After the Senate passed WRDA last month, the House of Representatives will take up the bill. BIG RIVER COALITION : AGGRESSIVELY PUSHING THE AGENDASean Duffy, Executive Director of the New Orleans-based Big River Coalition, maintains that government spending on dredging should be double the current levels. ?The easi- est solution would be to allocate the full revenue from the HMTF,? he said ?Revenue from this ad valorem-based tax continues to increase and is approaching $2 billion per year. In  scal 2012, a little over half, or $844 million, of the year- ly HMTF revenue of nearly $1.7 billion was allocated for harbor maintenance.? In essence, more than half of the FY 2012 HMTF revenue wasn?t used for its intended purposes. That?s not unusual, say industry stakeholders. The Of ce of Management and Budget (OMB) never- theless ? much to the chagrin of waterway users ? defends using money in the HMTF for purposes other than water-ways. But Duffy told MarineNews in May, ?According to the Army Corps, if we use all the HMTF funds raised yearly on dredging, they could maintain all deep-draft channels and harbor maintenance projects. If we spend only $1.5 billion a year, we can start playing catch-up every year. The Corps estimates that if spending were increased to $2 billion a year, all commercial deep-draft ports could be dredged to their 22 MNJune 2013MN June2013 Layout 18-31.indd 22MN June2013 Layout 18-31.indd 225/30/2013 11:08:06 AM5/30/2013 11:08:06 AM