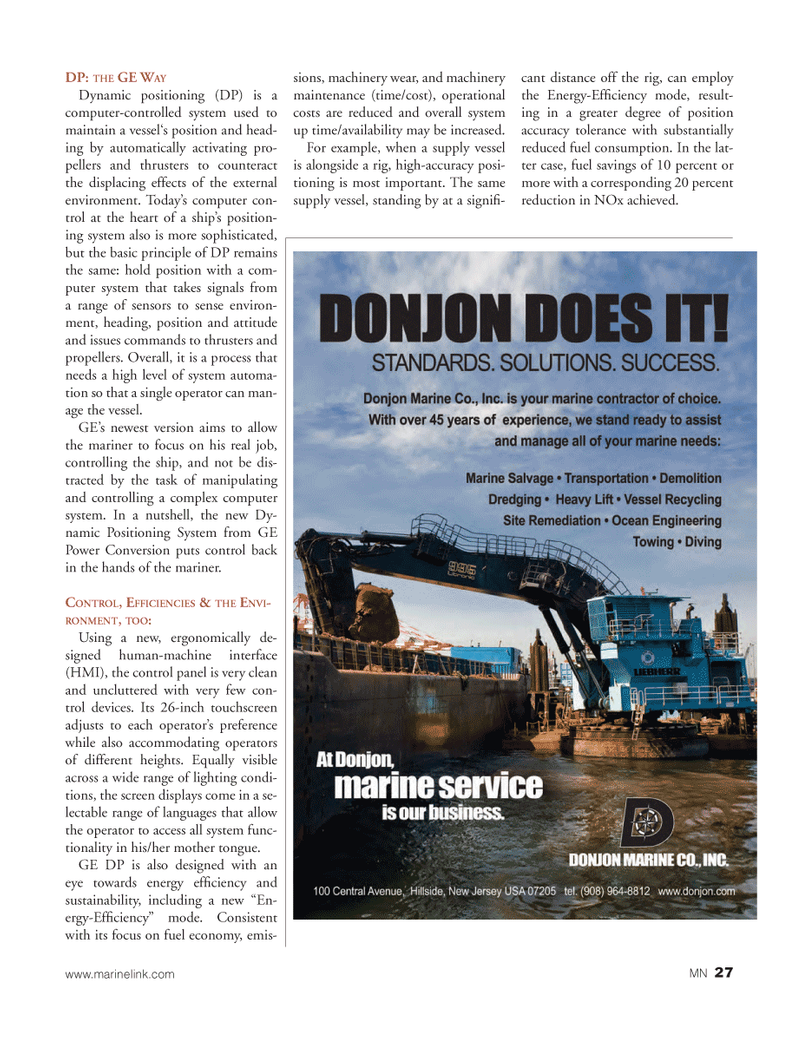 DP: THE GE W AYDynamic positioning (DP) is a computer-controlled system used to maintain a vessel?s position and head- ing by automatically activating pro- pellers and thrusters to counteract the displacing effects of the external environment. Today?s computer con- trol at the heart of a ship?s position- ing system also is more sophisticated, but the basic principle of DP remains the same: hold position with a com-puter system that takes signals from a range of sensors to sense environ- ment, heading, position and attitude and issues commands to thrusters and propellers. Overall, it is a process that needs a high level of system automa- tion so that a single operator can man-age the vessel. GE?s newest version aims to allow the mariner to focus on his real job, controlling the ship, and not be dis- tracted by the task of manipulating and controlling a complex computer system. In a nutshell, the new Dy- namic Positioning System from GE Power Conversion puts control back in the hands of the mariner. CONTROL , EFFICIENCIES & THE ENVI-RONMENT , TOO : Using a new, ergonomically de- signed human-machine interface (HMI), the control panel is very clean and uncluttered with very few con- trol devices. Its 26-inch touchscreen adjusts to each operator?s preference while also accommodating operators of different heights. Equally visible across a wide range of lighting condi- tions, the screen displays come in a se- lectable range of languages that allow the operator to access all system func-tionality in his/her mother tongue.GE DP is also designed with an eye towards energy ef ciency and sustainability, including a new ?En- ergy-Ef ciency? mode. Consistent with its focus on fuel economy, emis- sions, machinery wear, and machinery maintenance (time/cost), operational costs are reduced and overall system up time/availability may be increased. For example, when a supply vessel is alongside a rig, high-accuracy posi-tioning is most important. The same supply vessel, standing by at a signi -cant distance off the rig, can employ the Energy-Ef ciency mode, result- ing in a greater degree of position accuracy tolerance with substantially reduced fuel consumption. In the lat- ter case, fuel savings of 10 percent or more with a corresponding 20 percent reduction in NOx achieved. www.marinelink.com MN 27MN June2013 Layout 18-31.indd 27MN June2013 Layout 18-31.indd 275/30/2013 2:49:48 PM5/30/2013 2:49:48 PM