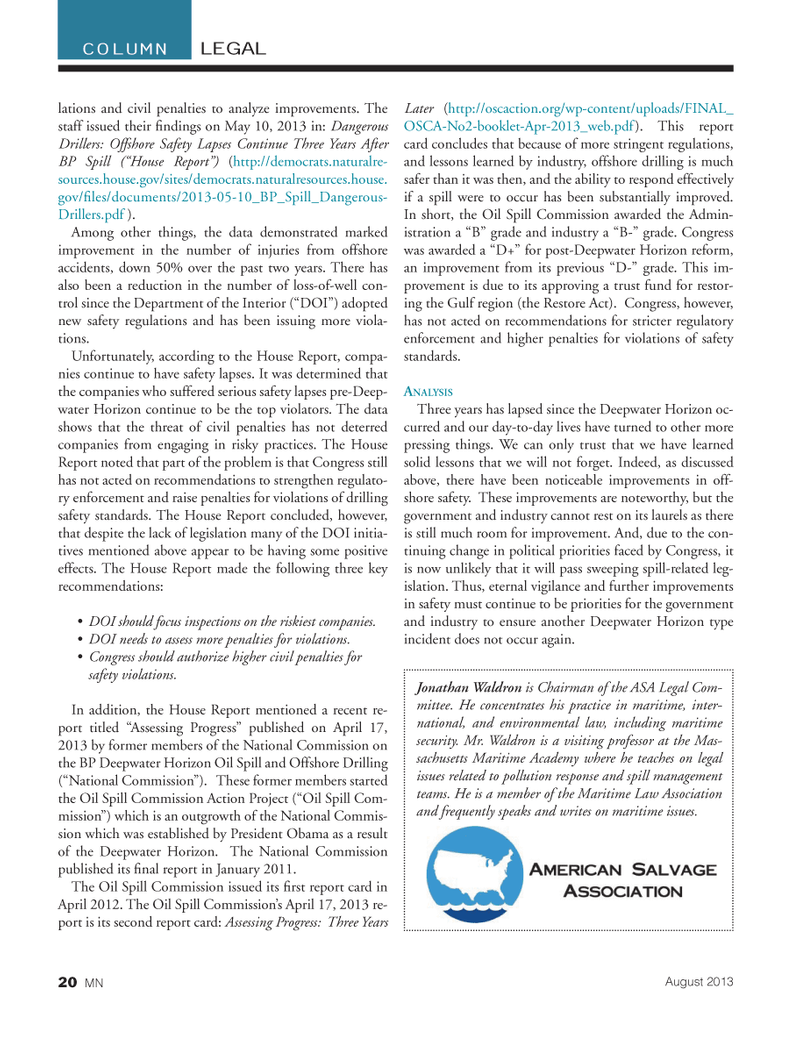 lations and civil penalties to analyze improvements. The staff issued their ? ndings on May 10, 2013 in: Dangerous Drillers: Offshore Safety Lapses Continue Three Years After BP Spill (House Report?) (http://democrats.naturalre- sources.house.gov/sites/democrats.naturalresources.house. gov/? les/documents/2013-05-10_BP_Spill_Dangerous- Drillers.pdf ).Among other things, the data demonstrated marked improvement in the number of injuries from offshore accidents, down 50% over the past two years. There has also been a reduction in the number of loss-of-well con- trol since the Department of the Interior (DOI?) adopted new safety regulations and has been issuing more viola- tions.Unfortunately, according to the House Report, compa- nies continue to have safety lapses. It was determined that the companies who suffered serious safety lapses pre-Deep- water Horizon continue to be the top violators. The data shows that the threat of civil penalties has not deterred companies from engaging in risky practices. The House Report noted that part of the problem is that Congress still has not acted on recommendations to strengthen regulato- ry enforcement and raise penalties for violations of drilling safety standards. The House Report concluded, however, that despite the lack of legislation many of the DOI initia-tives mentioned above appear to be having some positive effects. The House Report made the following three key recommendations: ? DOI should focus inspections on the riskiest companies. ? DOI needs to assess more penalties for violations. ? Congress should authorize higher civil penalties for safety violations. In addition, the House Report mentioned a recent re- port titled Assessing Progress? published on April 17, 2013 by former members of the National Commission on the BP Deepwater Horizon Oil Spill and Offshore Drilling (National Commission?). These former members started the Oil Spill Commission Action Project (Oil Spill Com- mission?) which is an outgrowth of the National Commis- sion which was established by President Obama as a result of the Deepwater Horizon. The National Commission published its ? nal report in January 2011. The Oil Spill Commission issued its ? rst report card in April 2012. The Oil Spill Commissions April 17, 2013 re- port is its second report card: Assessing Progress: Three Years Later (http://oscaction.org/wp-content/uploads/FINAL_OSCA-No2-booklet-Apr-2013_web.pdf ). This report card concludes that because of more stringent regulations, and lessons learned by industry, offshore drilling is much safer than it was then, and the ability to respond effectively if a spill were to occur has been substantially improved. In short, the Oil Spill Commission awarded the Admin- istration a B? grade and industry a B-? grade. Congress was awarded a D+? for post-Deepwater Horizon reform, an improvement from its previous D-? grade. This im- provement is due to its approving a trust fund for restor- ing the Gulf region (the Restore Act). Congress, however, has not acted on recommendations for stricter regulatory enforcement and higher penalties for violations of safety standards. ANALYSIS Three years has lapsed since the Deepwater Horizon oc- curred and our day-to-day lives have turned to other more pressing things. We can only trust that we have learned solid lessons that we will not forget. Indeed, as discussed above, there have been noticeable improvements in off- shore safety. These improvements are noteworthy, but the government and industry cannot rest on its laurels as there is still much room for improvement. And, due to the con- tinuing change in political priorities faced by Congress, it is now unlikely that it will pass sweeping spill-related leg- islation. Thus, eternal vigilance and further improvements in safety must continue to be priorities for the government and industry to ensure another Deepwater Horizon type incident does not occur again. LEGALCOLUMNJonathan Waldron is Chairman of the ASA Legal Com- mittee. He concentrates his practice in maritime, inter- national, and environmental law, including maritime security. Mr. Waldron is a visiting professor at the Mas- sachusetts Maritime Academy where he teaches on legal issues related to pollution response and spill management teams. He is a member of the Maritime Law Association and frequently speaks and writes on maritime issues. August 201320 MNMN August2013 Layout 18-31.indd 207/23/2013 7:15:30 PM