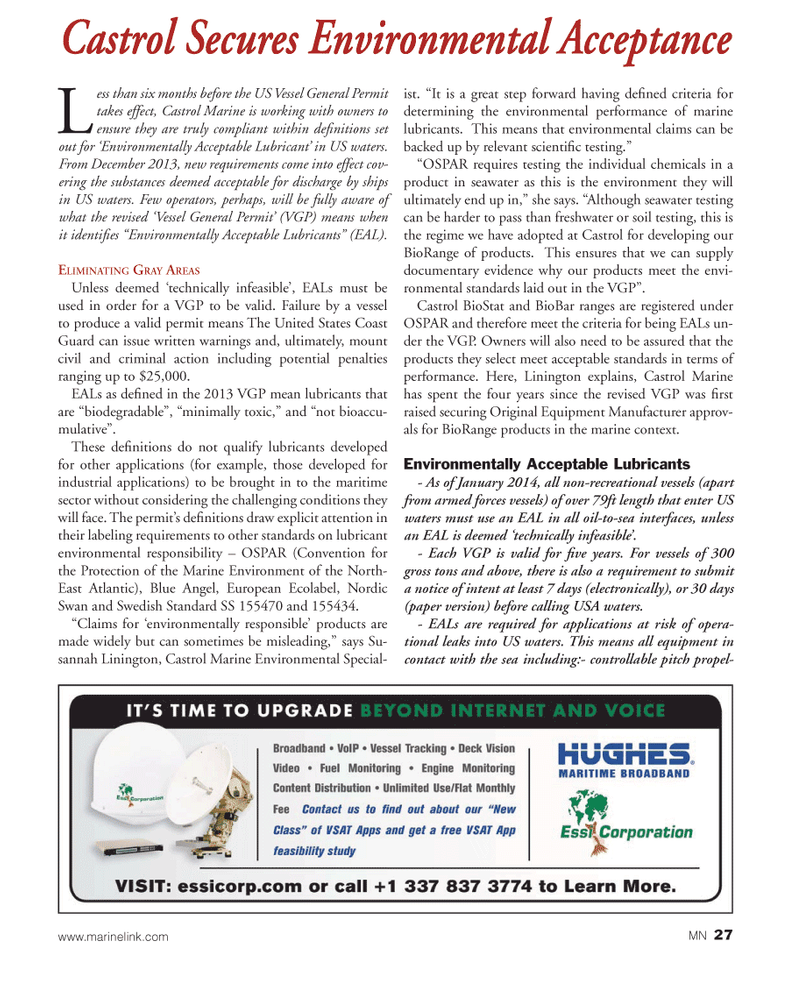 Less than six months before the US Vessel General Permit takes effect, Castrol Marine is working with owners to ensure they are truly compliant within de? nitions set out for Environmentally Acceptable Lubricant in US waters. From December 2013, new requirements come into effect cov- ering the substances deemed acceptable for discharge by ships in US waters. Few operators, perhaps, will be fully aware of what the revised Vessel General Permit (VGP) means when it identi? es Environmentally Acceptable Lubricants? (EAL). ELIMINATING GRAY AREASUnless deemed technically infeasible, EALs must be used in order for a VGP to be valid. Failure by a vessel to produce a valid permit means The United States Coast Guard can issue written warnings and, ultimately, mount civil and criminal action including potential penalties ranging up to $25,000. EALs as de? ned in the 2013 VGP mean lubricants that are biodegradable?, minimally toxic,? and not bioaccu- mulative?. These de? nitions do not qualify lubricants developed for other applications (for example, those developed for industrial applications) to be brought in to the maritime sector without considering the challenging conditions they will face. The permits de? nitions draw explicit attention in their labeling requirements to other standards on lubricant environmental responsibility ? OSPAR (Convention for the Protection of the Marine Environment of the North- East Atlantic), Blue Angel, European Ecolabel, Nordic Swan and Swedish Standard SS 155470 and 155434. Claims for environmentally responsible products are made widely but can sometimes be misleading,? says Su- sannah Linington, Castrol Marine Environmental Special- ist. It is a great step forward having de? ned criteria for determining the environmental performance of marine lubricants. This means that environmental claims can be backed up by relevant scienti? c testing.? OSPAR requires testing the individual chemicals in a product in seawater as this is the environment they will ultimately end up in,? she says. Although seawater testing can be harder to pass than freshwater or soil testing, this is the regime we have adopted at Castrol for developing our BioRange of products. This ensures that we can supply documentary evidence why our products meet the envi- ronmental standards laid out in the VGP?. Castrol BioStat and BioBar ranges are registered under OSPAR and therefore meet the criteria for being EALs un- der the VGP. Owners will also need to be assured that the products they select meet acceptable standards in terms of performance. Here, Linington explains, Castrol Marine has spent the four years since the revised VGP was ? rst raised securing Original Equipment Manufacturer approv- als for BioRange products in the marine context. Environmentally Acceptable Lubricants - As of January 2014, all non-recreational vessels (apart from armed forces vessels) of over 79ft length that enter US waters must use an EAL in all oil-to-sea interfaces, unless an EAL is deemed technically infeasible. - Each VGP is valid for ? ve years. For vessels of 300 gross tons and above, there is also a requirement to submit a notice of intent at least 7 days (electronically), or 30 days (paper version) before calling USA waters. - EALs are required for applications at risk of opera- tional leaks into US waters. This means all equipment in contact with the sea including:- controllable pitch propel- Castrol Secures Environmental Acceptance www.marinelink.com MN 27MN August2013 Layout 18-31.indd 277/23/2013 7:18:17 PM