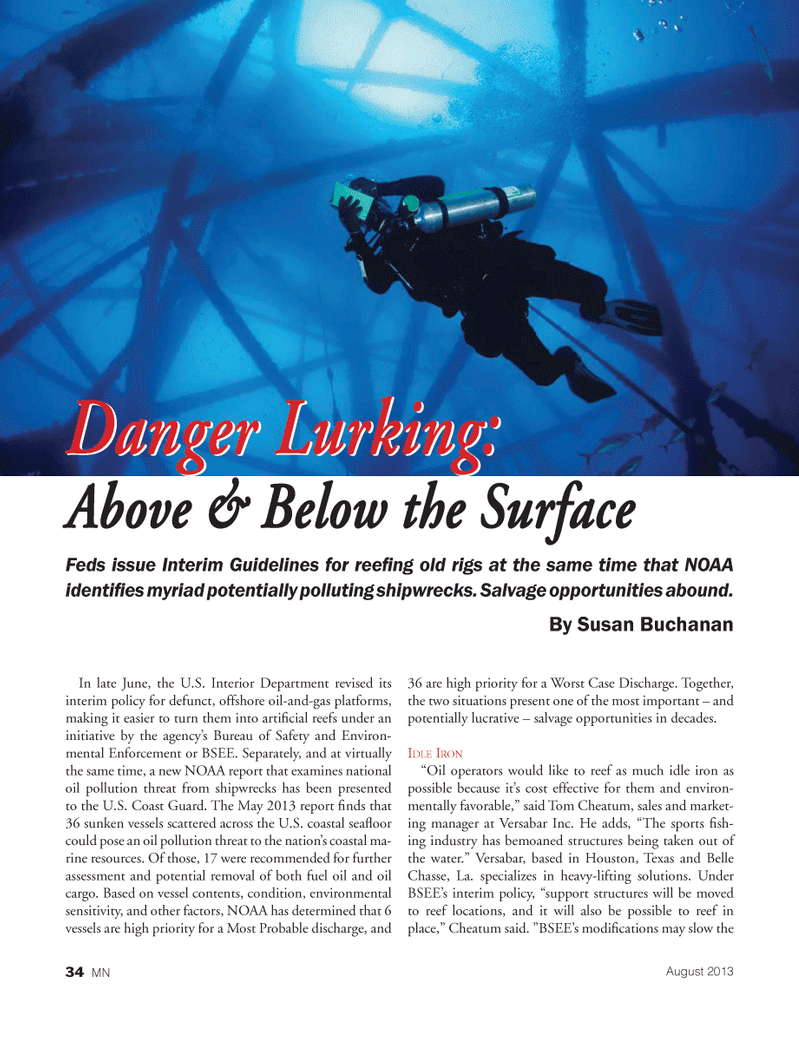 In late June, the U.S. Interior Department revised its interim policy for defunct, offshore oil-and-gas platforms, making it easier to turn them into arti? cial reefs under an initiative by the agencys Bureau of Safety and Environ- mental Enforcement or BSEE. Separately, and at virtually the same time, a new NOAA report that examines national oil pollution threat from shipwrecks has been presented to the U.S. Coast Guard. The May 2013 report ? nds that 36 sunken vessels scattered across the U.S. coastal sea? oor could pose an oil pollution threat to the nations coastal ma- rine resources. Of those, 17 were recommended for further assessment and potential removal of both fuel oil and oil cargo. Based on vessel contents, condition, environmental sensitivity, and other factors, NOAA has determined that 6 vessels are high priority for a Most Probable discharge, and 36 are high priority for a Worst Case Discharge. Together, the two situations present one of the most important ? and potentially lucrative ? salvage opportunities in decades. IDLE IRON Oil operators would like to reef as much idle iron as possible because its cost effective for them and environ- mentally favorable,? said Tom Cheatum, sales and market- ing manager at Versabar Inc. He adds, The sports ? sh- ing industry has bemoaned structures being taken out of the water.? Versabar, based in Houston, Texas and Belle Chasse, La. specializes in heavy-lifting solutions. Under BSEEs interim policy, support structures will be moved to reef locations, and it will also be possible to reef in place,? Cheatum said. ?BSEEs modi? cations may slow the Feds issue Interim Guidelines for ree À ng old rigs at the same time that NOAA identiÀ es myriad potentially polluting shipwrecks. Salvage opportunities abound. By Susan Buchanan Danger Lurking: Above & Below the Surface Danger Lurking: August 201334 MNMN August2013 Layout 32-49.indd 347/23/2013 7:24:20 PM