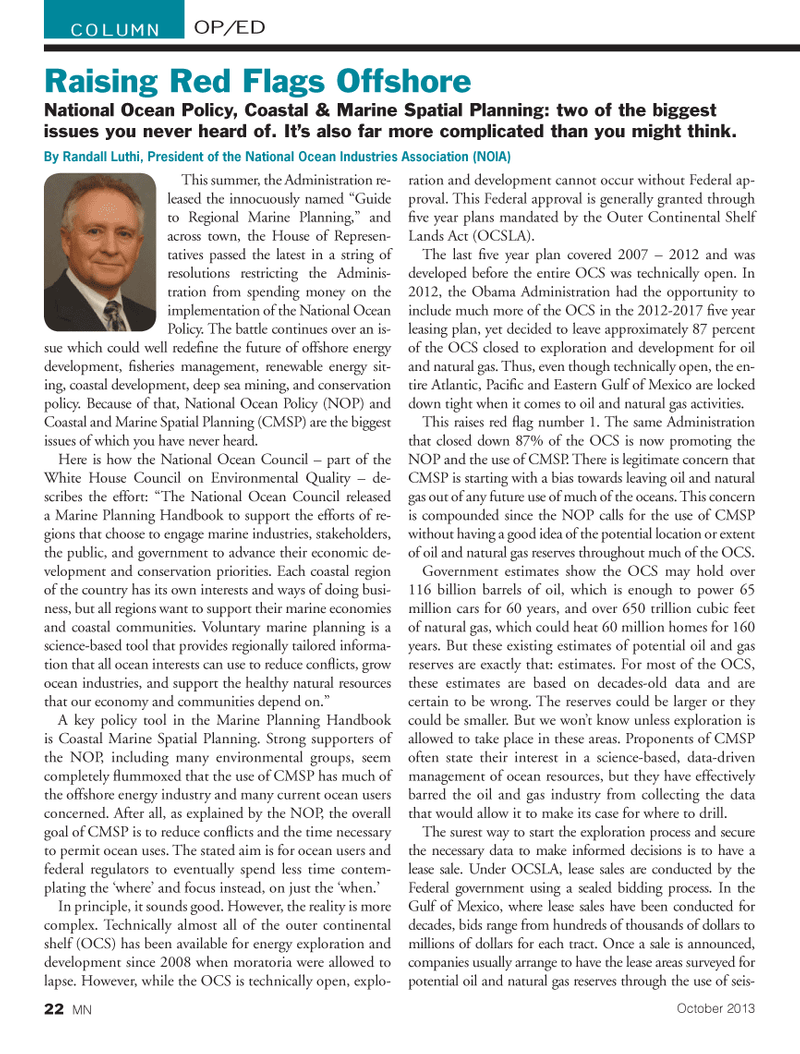 This summer, the Administration re- leased the innocuously named ?Guide to Regional Marine Planning,? and across town, the House of Represen- tatives passed the latest in a string of resolutions restricting the Adminis- tration from spending money on the implementation of the National Ocean Policy. The battle continues over an is- sue which could well rede ne the future of offshore energy development,  sheries management, renewable energy sit- ing, coastal development, deep sea mining, and conservation policy. Because of that, National Ocean Policy (NOP) and Coastal and Marine Spatial Planning (CMSP) are the biggest issues of which you have never heard. Here is how the National Ocean Council ? part of the White House Council on Environmental Quality ? de- scribes the effort: ?The National Ocean Council released a Marine Planning Handbook to support the efforts of re- gions that choose to engage marine industries, stakeholders, the public, and government to advance their economic de- velopment and conservation priorities. Each coastal region of the country has its own interests and ways of doing busi- ness, but all regions want to support their marine economies and coastal communities. Voluntary marine planning is a science-based tool that provides regionally tailored informa- tion that all ocean interests can use to reduce con icts, grow ocean industries, and support the healthy natural resources that our economy and communities depend on.?A key policy tool in the Marine Planning Handbook is Coastal Marine Spatial Planning. Strong supporters of the NOP, including many environmental groups, seem completely  ummoxed that the use of CMSP has much of the offshore energy industry and many current ocean users concerned. After all, as explained by the NOP, the overall goal of CMSP is to reduce con icts and the time necessary to permit ocean uses. The stated aim is for ocean users and federal regulators to eventually spend less time contem- plating the ?where? and focus instead, on just the ?when.? In principle, it sounds good. However, the reality is more complex. Technically almost all of the outer continental shelf (OCS) has been available for energy exploration and development since 2008 when moratoria were allowed to lapse. However, while the OCS is technically open, explo- ration and development cannot occur without Federal ap- proval. This Federal approval is generally granted through  ve year plans mandated by the Outer Continental Shelf Lands Act (OCSLA). The last  ve year plan covered 2007 ? 2012 and was developed before the entire OCS was technically open. In 2012, the Obama Administration had the opportunity to include much more of the OCS in the 2012-2017  ve year leasing plan, yet decided to leave approximately 87 percent of the OCS closed to exploration and development for oil and natural gas. Thus, even though technically open, the en- tire Atlantic, Paci c and Eastern Gulf of Mexico are locked down tight when it comes to oil and natural gas activities. This raises red  ag number 1. The same Administration that closed down 87% of the OCS is now promoting the NOP and the use of CMSP. There is legitimate concern that CMSP is starting with a bias towards leaving oil and natural gas out of any future use of much of the oceans. This concern is compounded since the NOP calls for the use of CMSP without having a good idea of the potential location or extent of oil and natural gas reserves throughout much of the OCS. Government estimates show the OCS may hold over 116 billion barrels of oil, which is enough to power 65 million cars for 60 years, and over 650 trillion cubic feet of natural gas, which could heat 60 million homes for 160 years. But these existing estimates of potential oil and gas reserves are exactly that: estimates. For most of the OCS, these estimates are based on decades-old data and are certain to be wrong. The reserves could be larger or they could be smaller. But we won?t know unless exploration is allowed to take place in these areas. Proponents of CMSP often state their interest in a science-based, data-driven management of ocean resources, but they have effectively barred the oil and gas industry from collecting the data that would allow it to make its case for where to drill. The surest way to start the exploration process and secure the necessary data to make informed decisions is to have a lease sale. Under OCSLA, lease sales are conducted by the Federal government using a sealed bidding process. In the Gulf of Mexico, where lease sales have been conducted for decades, bids range from hundreds of thousands of dollars to millions of dollars for each tract. Once a sale is announced, companies usually arrange to have the lease areas surveyed for potential oil and natural gas reserves through the use of seis- Raising Red Flags Offshore National Ocean Policy, Coastal & Marine Spatial Planning: two of the biggest issues you never heard of. It?s also far more complicated than you might think. By Randall Luthi, President of the National Ocean Industries Association (NOIA) OP/EDCOLUMN22 MNOctober 2013MN October2013 Layout 18-31.indd 22MN October2013 Layout 18-31.indd 229/30/2013 11:21:39 AM9/30/2013 11:21:39 AM