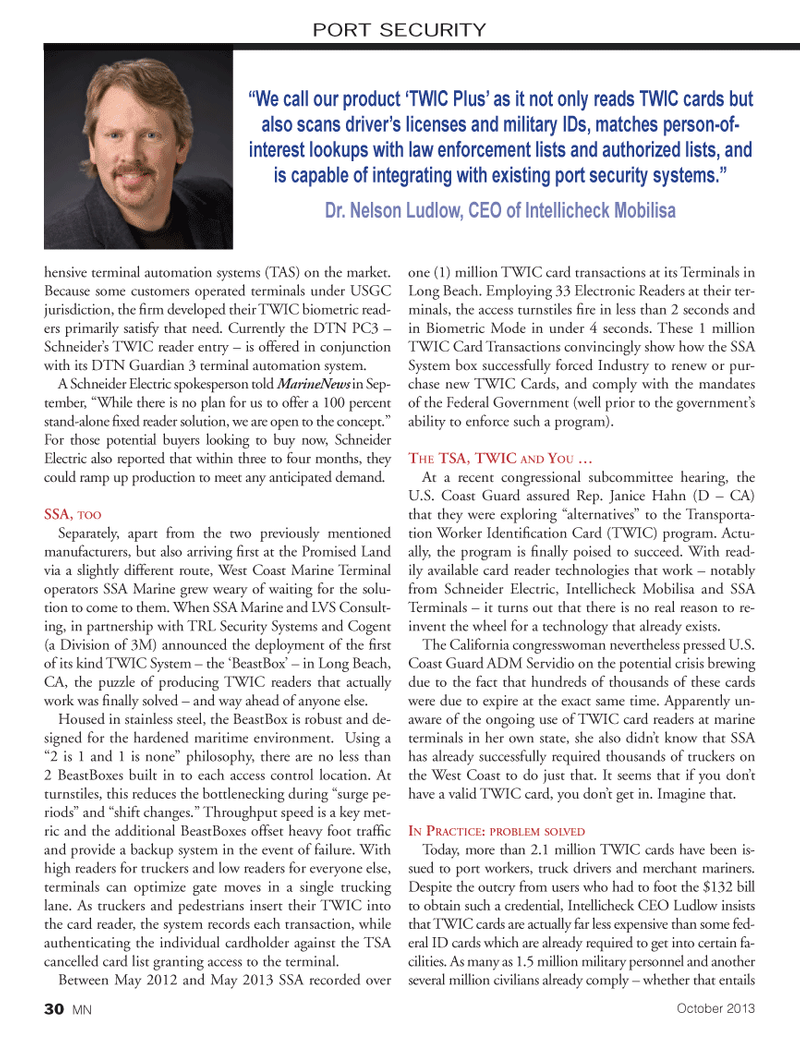 hensive terminal automation systems (TAS) on the market. Because some customers operated terminals under USGC jurisdiction, the Þ rm developed their TWIC biometric read- ers primarily satisfy that need. Currently the DTN PC3 Ð SchneiderÕs TWIC reader entry Ð is offered in conjunction with its DTN Guardian 3 terminal automation system. A Schneider Electric spokesperson told MarineNews in Sep- tember, ÒWhile there is no plan for us to offer a 100 percent stand-alone Þ xed reader solution, we are open to the concept.Ó For those potential buyers looking to buy now, Schneider Electric also reported that within three to four months, they could ramp up production to meet any anticipated demand. SSA, TOO Separately, apart from the two previously mentioned manufacturers, but also arriving Þ rst at the Promised Land via a slightly different route, West Coast Marine Terminal operators SSA Marine grew weary of waiting for the solu- tion to come to them. When SSA Marine and LVS Consult- ing, in partnership with TRL Security Systems and Cogent (a Division of 3M) announced the deployment of the Þ rst of its kind TWIC System Ð the ÔBeastBoxÕ Ð in Long Beach, CA, the puzzle of producing TWIC readers that actually work was Þ nally solved Ð and way ahead of anyone else. Housed in stainless steel, the BeastBox is robust and de- signed for the hardened maritime environment. Using a Ò2 is 1 and 1 is noneÓ philosophy, there are no less than 2 BeastBoxes built in to each access control location. At turnstiles, this reduces the bottlenecking during Òsurge pe- riodsÓ and Òshift changes.Ó Throughput speed is a key met- ric and the additional BeastBoxes offset heavy foot trafÞ c and provide a backup system in the event of failure. With high readers for truckers and low readers for everyone else, terminals can optimize gate moves in a single trucking lane. As truckers and pedestrians insert their TWIC into the card reader, the system records each transaction, while authenticating the individual cardholder against the TSA cancelled card list granting access to the terminal. Between May 2012 and May 2013 SSA recorded over one (1) million TWIC card transactions at its Terminals in Long Beach. Employing 33 Electronic Readers at their ter- minals, the access turnstiles Þ re in less than 2 seconds and in Biometric Mode in under 4 seconds. These 1 million TWIC Card Transactions convincingly show how the SSA System box successfully forced Industry to renew or pur- chase new TWIC Cards, and comply with the mandates of the Federal Government (well prior to the governmentÕs ability to enforce such a program). THE TSA, TWIC AND YOU ?At a recent congressional subcommittee hearing, the U.S. Coast Guard assured Rep. Janice Hahn (D Ð CA) that they were exploring ÒalternativesÓ to the Transporta- tion Worker IdentiÞ cation Card (TWIC) program. Actu- ally, the program is Þ nally poised to succeed. With read- ily available card reader technologies that work Ð notably from Schneider Electric, Intellicheck Mobilisa and SSA Terminals Ð it turns out that there is no real reason to re- invent the wheel for a technology that already exists. The California congresswoman nevertheless pressed U.S. Coast Guard ADM Servidio on the potential crisis brewing due to the fact that hundreds of thousands of these cards were due to expire at the exact same time. Apparently un- aware of the ongoing use of TWIC card readers at marine terminals in her own state, she also didnÕt know that SSA has already successfully required thousands of truckers on the West Coast to do just that. It seems that if you donÕt have a valid TWIC card, you donÕt get in. Imagine that. IN PRACTICE : PROBLEM SOLVED Today, more than 2.1 million TWIC cards have been is- sued to port workers, truck drivers and merchant mariners. Despite the outcry from users who had to foot the $132 bill to obtain such a credential, Intellicheck CEO Ludlow insists that TWIC cards are actually far less expensive than some fed- eral ID cards which are already required to get into certain fa- cilities. As many as 1.5 million military personnel and another several million civilians already comply Ð whether that entails PORT SECURITY?We call our product ?TWIC Plus? as it not only reads TWIC cards but also scans driver?s licenses and military IDs, matches person-of- interest lookups with law enforcement lists and authorized lists, and is capable of integrating with existing port security systems.?Dr. Nelson Ludlow, CEO of Intellicheck Mobilisa October 201330 MNMN October2013 Layout 18-31.indd 30MN October2013 Layout 18-31.indd 309/30/2013 11:25:47 AM9/30/2013 11:25:47 AM