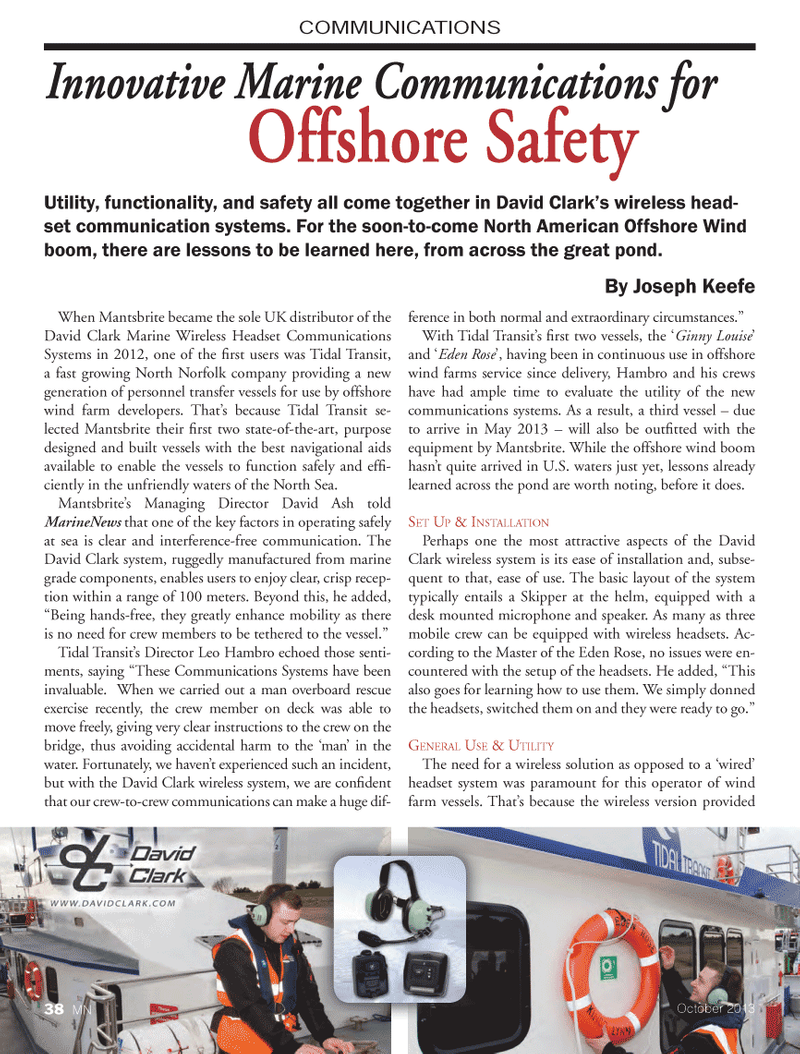 When Mantsbrite became the sole UK distributor of the David Clark Marine Wireless Headset Communications Systems in 2012, one of the Þ rst users was Tidal Transit, a fast growing North Norfolk company providing a new generation of personnel transfer vessels for use by offshore wind farm developers. ThatÕs because Tidal Transit se- lected Mantsbrite their Þ rst two state-of-the-art, purpose designed and built vessels with the best navigational aids available to enable the vessels to function safely and efÞ -ciently in the unfriendly waters of the North Sea. MantsbriteÕs Managing Director David Ash told MarineNews that one of the key factors in operating safely at sea is clear and interference-free communication. The David Clark system, ruggedly manufactured from marine grade components, enables users to enjoy clear, crisp recep- tion within a range of 100 meters. Beyond this, he added, ÒBeing hands-free, they greatly enhance mobility as there is no need for crew members to be tethered to the vessel.Ó Tidal TransitÕs Director Leo Hambro echoed those senti- ments, saying ÒThese Communications Systems have been invaluable. When we carried out a man overboard rescue exercise recently, the crew member on deck was able to move freely, giving very clear instructions to the crew on the bridge, thus avoiding accidental harm to the ÔmanÕ in the water. Fortunately, we havenÕt experienced such an incident, but with the David Clark wireless system, we are conÞ dent that our crew-to-crew communications can make a huge dif- ference in both normal and extraordinary circumstances.Ó With Tidal TransitÕs Þ rst two vessels, the Ô Ginny Louise Õ and ÔEden Rose Õ, having been in continuous use in offshore wind farms service since delivery, Hambro and his crews have had ample time to evaluate the utility of the new communications systems. As a result, a third vessel Ð due to arrive in May 2013 Ð will also be outÞ tted with the equipment by Mantsbrite. While the offshore wind boom hasnÕt quite arrived in U.S. waters just yet, lessons already learned across the pond are worth noting, before it does. SET UP & INSTALLATION Perhaps one the most attractive aspects of the David Clark wireless system is its ease of installation and, subse- quent to that, ease of use. The basic layout of the system typically entails a Skipper at the helm, equipped with a desk mounted microphone and speaker. As many as three mobile crew can be equipped with wireless headsets. Ac- cording to the Master of the Eden Rose, no issues were en- countered with the setup of the headsets. He added, ÒThis also goes for learning how to use them. We simply donned the headsets, switched them on and they were ready to go.Ó GENERAL USE & UTILITY The need for a wireless solution as opposed to a ÔwiredÕ headset system was paramount for this operator of wind farm vessels. ThatÕs because the wireless version provided Innovative Marine Communications for Innovative Marine Communications for Offshore Safety Offshore Safety Utility, functionality, and safety all come together in David Clark?s wireless head- set communication systems. For the soon-to-come North American Offshore Wind boom, there are lessons to be learned here, from across the great pond. By Joseph Keefe COMMUNICATIONS October 201338 MNMN October2013 Layout 32-49.indd 38MN October2013 Layout 32-49.indd 389/30/2013 11:32:25 AM9/30/2013 11:32:25 AM