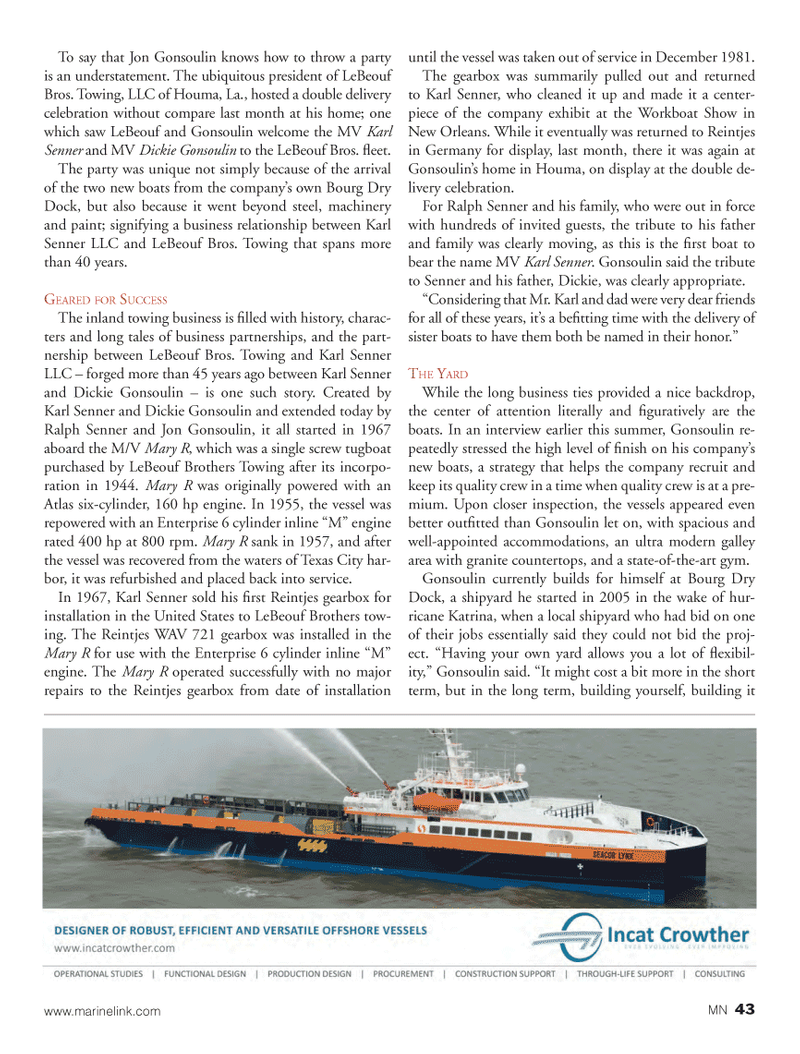 To say that Jon Gonsoulin knows how to throw a party is an understatement. The ubiquitous president of LeBeouf Bros. Towing, LLC of Houma, La., hosted a double delivery celebration without compare last month at his home; one which saw LeBeouf and Gonsoulin welcome the MV Karl Senner and MV Dickie Gonsoulin to the LeBeouf Bros. ß eet. The party was unique not simply because of the arrival of the two new boats from the companyÕs own Bourg Dry Dock, but also because it went beyond steel, machinery and paint; signifying a business relationship between Karl Senner LLC and LeBeouf Bros. Towing that spans more than 40 years. GEARED FOR SUCCESSThe inland towing business is Þ lled with history, charac- ters and long tales of business partnerships, and the part- nership between LeBeouf Bros. Towing and Karl Senner LLC Ð forged more than 45 years ago between Karl Senner and Dickie Gonsoulin Ð is one such story. Created by Karl Senner and Dickie Gonsoulin and extended today by Ralph Senner and Jon Gonsoulin, it all started in 1967 aboard the M/V Mary R , which was a single screw tugboat purchased by LeBeouf Brothers Towing after its incorpo- ration in 1944. Mary R was originally powered with an Atlas six-cylinder, 160 hp engine. In 1955, the vessel was repowered with an Enterprise 6 cylinder inline ÒMÓ engine rated 400 hp at 800 rpm. Mary R sank in 1957, and after the vessel was recovered from the waters of Texas City har- bor, it was refurbished and placed back into service. In 1967, Karl Senner sold his Þ rst Reintjes gearbox for installation in the United States to LeBeouf Brothers tow- ing. The Reintjes WAV 721 gearbox was installed in the Mary R for use with the Enterprise 6 cylinder inline ÒMÓ engine. The Mary R operated successfully with no major repairs to the Reintjes gearbox from date of installation until the vessel was taken out of service in December 1981. The gearbox was summarily pulled out and returned to Karl Senner, who cleaned it up and made it a center- piece of the company exhibit at the Workboat Show in New Orleans. While it eventually was returned to Reintjes in Germany for display, last month, there it was again at GonsoulinÕs home in Houma, on display at the double de- livery celebration. For Ralph Senner and his family, who were out in force with hundreds of invited guests, the tribute to his father and family was clearly moving, as this is the Þ rst boat to bear the name MV Karl Senner . Gonsoulin said the tribute to Senner and his father, Dickie, was clearly appropriate. ÒConsidering that Mr. Karl and dad were very dear friends for all of these years, itÕs a beÞ tting time with the delivery of sister boats to have them both be named in their honor.Ó THE YARDWhile the long business ties provided a nice backdrop, the center of attention literally and Þ guratively are the boats. In an interview earlier this summer, Gonsoulin re- peatedly stressed the high level of Þ nish on his companyÕs new boats, a strategy that helps the company recruit and keep its quality crew in a time when quality crew is at a pre- mium. Upon closer inspection, the vessels appeared even better outÞ tted than Gonsoulin let on, with spacious and well-appointed accommodations, an ultra modern galley area with granite countertops, and a state-of-the-art gym. Gonsoulin currently builds for himself at Bourg Dry Dock, a shipyard he started in 2005 in the wake of hur- ricane Katrina, when a local shipyard who had bid on one of their jobs essentially said they could not bid the proj- ect. ÒHaving your own yard allows you a lot of ß exibil-ity,Ó Gonsoulin said. ÒIt might cost a bit more in the short term, but in the long term, building yourself, building it www.marinelink.com MN 43MN October2013 Layout 32-49.indd 43MN October2013 Layout 32-49.indd 439/30/2013 11:33:30 AM9/30/2013 11:33:30 AM