Read this page in Pdf, Flash or Html5 edition of May 2014 Marine News Magazine 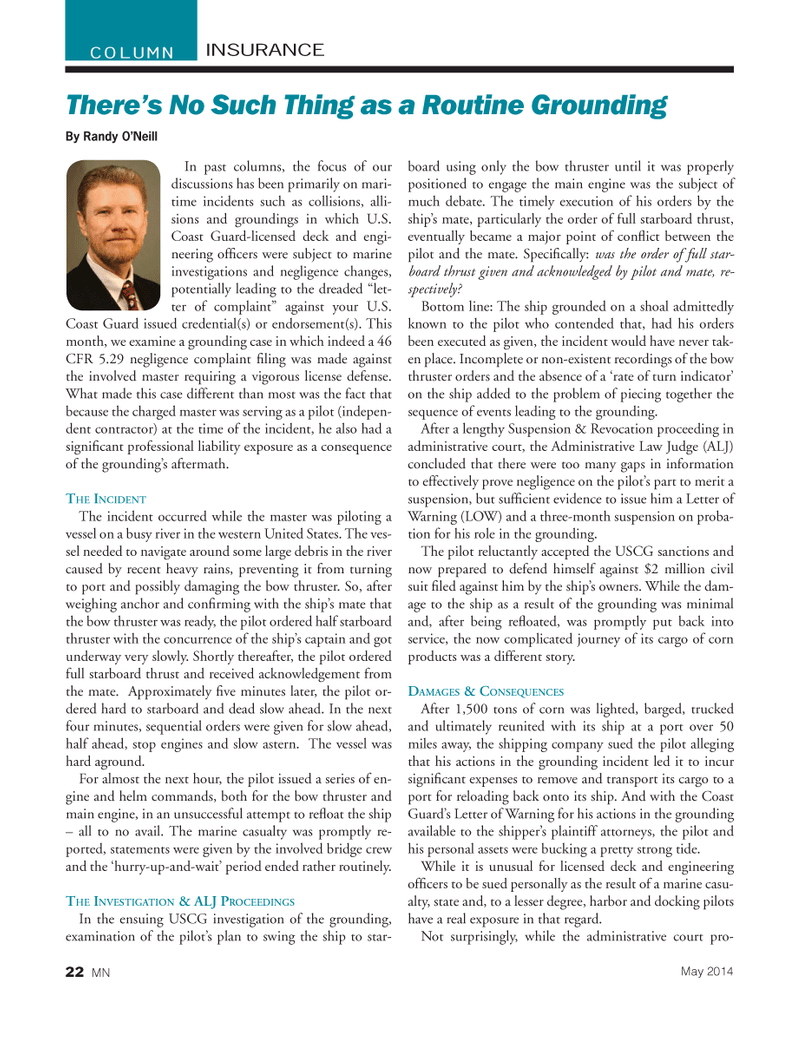 In past columns, the focus of our discussions has been primarily on mari- time incidents such as collisions, alli- sions and groundings in which U.S.

Coast Guard-licensed deck and engi- neering offi cers were subject to marine investigations and negligence changes, potentially leading to the dreaded “let- ter of complaint” against your U.S.

Coast Guard issued credential(s) or endorsement(s). This month, we examine a grounding case in which indeed a 46

CFR 5.29 negligence complaint fi ling was made against the involved master requiring a vigorous license defense.

What made this case different than most was the fact that because the charged master was serving as a pilot (indepen- dent contractor) at the time of the incident, he also had a signifi cant professional liability exposure as a consequence of the grounding’s aftermath.

The incident occurred while the master was piloting a vessel on a busy river in the western United States. The ves- sel needed to navigate around some large debris in the river caused by recent heavy rains, preventing it from turning to port and possibly damaging the bow thruster. So, after weighing anchor and confi rming with the ship’s mate that the bow thruster was ready, the pilot ordered half starboard thruster with the concurrence of the ship’s captain and got underway very slowly. Shortly thereafter, the pilot ordered full starboard thrust and received acknowledgement from the mate. Approximately fi ve minutes later, the pilot or- dered hard to starboard and dead slow ahead. In the next four minutes, sequential orders were given for slow ahead, half ahead, stop engines and slow astern. The vessel was hard aground.

For almost the next hour, the pilot issued a series of en- gine and helm commands, both for the bow thruster and main engine, in an unsuccessful attempt to refl oat the ship – all to no avail. The marine casualty was promptly re- ported, statements were given by the involved bridge crew and the ‘hurry-up-and-wait’ period ended rather routinely.

In the ensuing USCG investigation of the grounding, examination of the pilot’s plan to swing the ship to star- board using only the bow thruster until it was properly positioned to engage the main engine was the subject of much debate. The timely execution of his orders by the ship’s mate, particularly the order of full starboard thrust, eventually became a major point of confl ict between the pilot and the mate. Specifi cally: was the order of full star- board thrust given and acknowledged by pilot and mate, re- spectively?

Bottom line: The ship grounded on a shoal admittedly known to the pilot who contended that, had his orders been executed as given, the incident would have never tak- en place. Incomplete or non-existent recordings of the bow thruster orders and the absence of a ‘rate of turn indicator’ on the ship added to the problem of piecing together the sequence of events leading to the grounding.

After a lengthy Suspension & Revocation proceeding in administrative court, the Administrative Law Judge (ALJ) concluded that there were too many gaps in information to effectively prove negligence on the pilot’s part to merit a suspension, but suffi cient evidence to issue him a Letter of

Warning (LOW) and a three-month suspension on proba- tion for his role in the grounding.

The pilot reluctantly accepted the USCG sanctions and now prepared to defend himself against $2 million civil suit fi led against him by the ship’s owners. While the dam- age to the ship as a result of the grounding was minimal and, after being refl oated, was promptly put back into service, the now complicated journey of its cargo of corn products was a different story.

After 1,500 tons of corn was lighted, barged, trucked and ultimately reunited with its ship at a port over 50 miles away, the shipping company sued the pilot alleging that his actions in the grounding incident led it to incur signifi cant expenses to remove and transport its cargo to a port for reloading back onto its ship. And with the Coast

Guard’s Letter of Warning for his actions in the grounding available to the shipper’s plaintiff attorneys, the pilot and his personal assets were bucking a pretty strong tide.

While it is unusual for licensed deck and engineering offi cers to be sued personally as the result of a marine casu- alty, state and, to a lesser degree, harbor and docking pilots have a real exposure in that regard.

Not surprisingly, while the administrative court pro-

There’s No Such Thing as a Routine Grounding