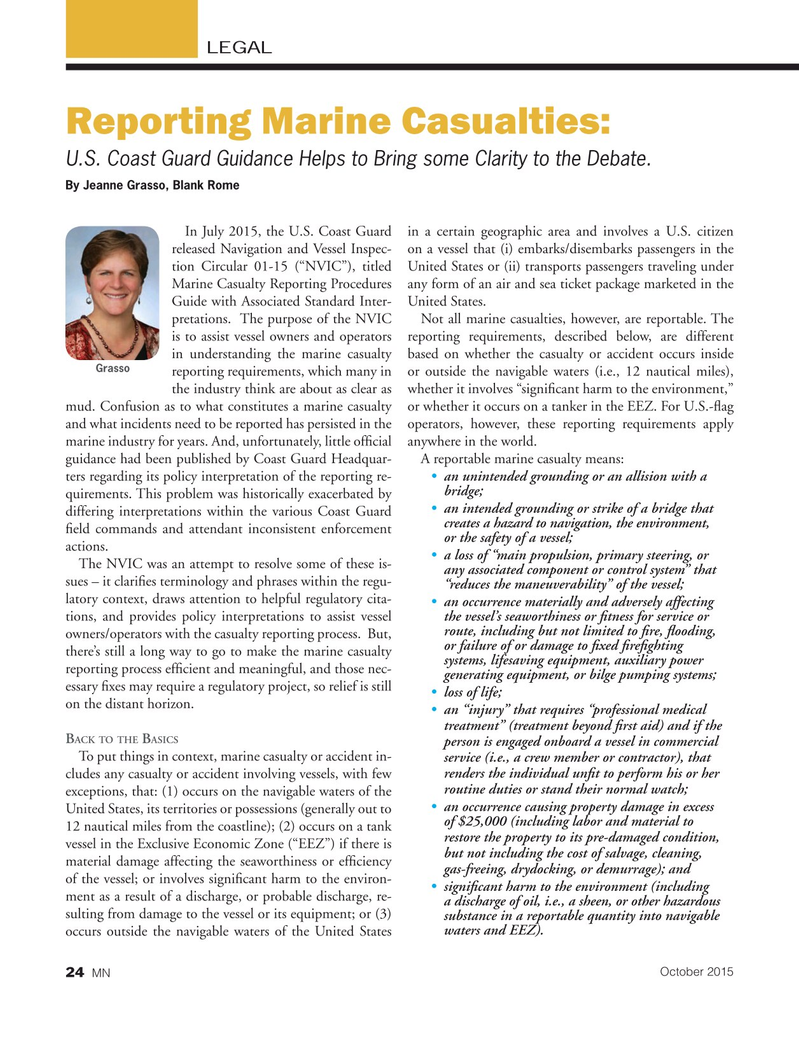 U.S. Coast Guard Guidance Helps to Bring some Clarity to the Debate.

In July 2015, the U.S. Coast Guard in a certain geographic area and involves a U.S. citizen released Navigation and Vessel Inspec- on a vessel that (i) embarks/disembarks passengers in the tion Circular 01-15 (“NVIC”), titled United States or (ii) transports passengers traveling under

pretations. The purpose of the NVIC Not all marine casualties, however, are reportable. The is to assist vessel owners and operators reporting requirements, described below, are different in understanding the marine casualty based on whether the casualty or accident occurs inside

Grasso reporting requirements, which many in or outside the navigable waters (i.e., 12 nautical miles), the industry think are about as clear as whether it involves “signi? cant harm to the environment,” mud. Confusion as to what constitutes a marine casualty or whether it occurs on a tanker in the EEZ. For U.S.-? ag and what incidents need to be reported has persisted in the operators, however, these reporting requirements apply marine industry for years. And, unfortunately, little of? cial anywhere in the world.

guidance had been published by Coast Guard Headquar- A reportable marine casualty means: ters regarding its policy interpretation of the reporting re- • an unintended grounding or an allision with a bridge; quirements. This problem was historically exacerbated by • an intended grounding or strike of a bridge that differing interpretations within the various Coast Guard creates a hazard to navigation, the environment, ? eld commands and attendant inconsistent enforcement or the safety of a vessel; actions.

• a loss of “main propulsion, primary steering, or

The NVIC was an attempt to resolve some of these is- any associated component or control system” that sues – it clari? es terminology and phrases within the regu- “reduces the maneuverability” of the vessel; latory context, draws attention to helpful regulatory cita- • an occurrence materially and adversely affecting tions, and provides policy interpretations to assist vessel the vessel’s seaworthiness or ? tness for service or route, including but not limited to ? re, ? ooding, owners/operators with the casualty reporting process. But, or failure of or damage to ? xed ? re? ghting there’s still a long way to go to make the marine casualty systems, lifesaving equipment, auxiliary power reporting process ef? cient and meaningful, and those nec- generating equipment, or bilge pumping systems; essary ? xes may require a regulatory project, so relief is still • loss of life; on the distant horizon.

• an “injury” that requires “professional medical treatment” (treatment beyond ? rst aid) and if the

To put things in context, marine casualty or accident in- service (i.e., a crew member or contractor), that cludes any casualty or accident involving vessels, with few renders the individual un? t to perform his or her routine duties or stand their normal watch; exceptions, that: (1) occurs on the navigable waters of the • an occurrence causing property damage in excess

United States, its territories or possessions (generally out to of $25,000 (including labor and material to 12 nautical miles from the coastline); (2) occurs on a tank restore the property to its pre-damaged condition, vessel in the Exclusive Economic Zone (“EEZ”) if there is but not including the cost of salvage, cleaning, material damage affecting the seaworthiness or ef? ciency gas-freeing, drydocking, or demurrage); and of the vessel; or involves signi? cant harm to the environ- • signi? cant harm to the environment (including ment as a result of a discharge, or probable discharge, re- a discharge of oil, i.e., a sheen, or other hazardous sulting from damage to the vessel or its equipment; or (3) substance in a reportable quantity into navigable occurs outside the navigable waters of the United States waters and EEZ).