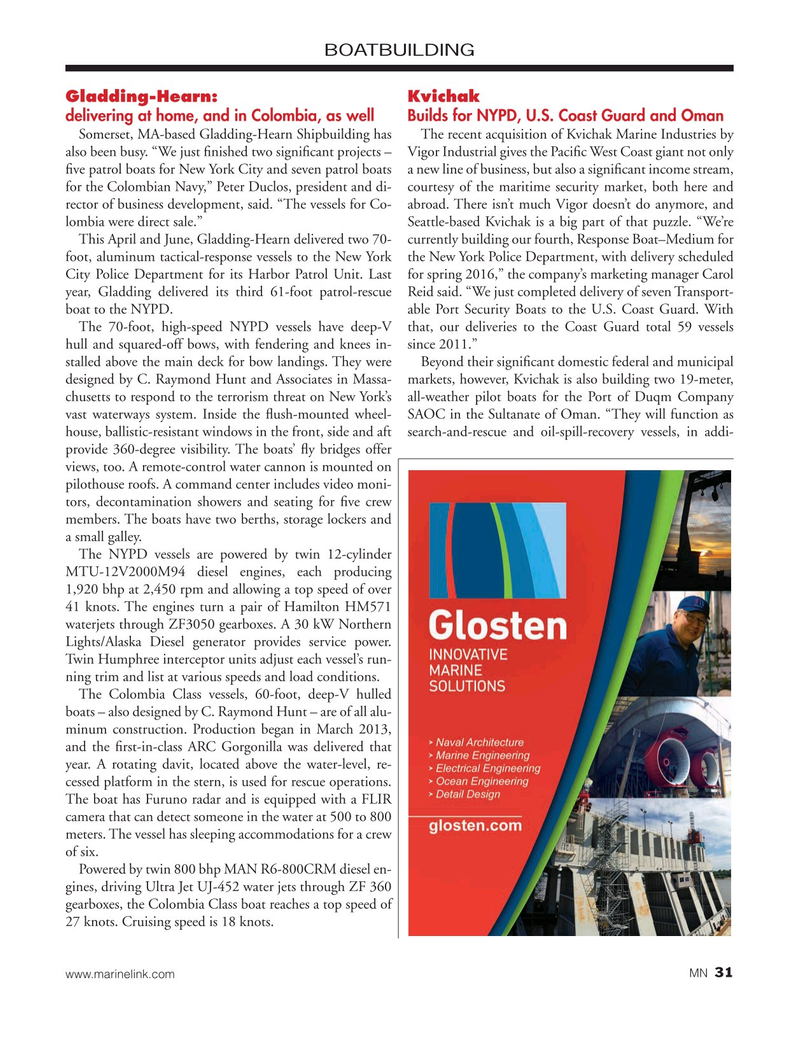 Gladding-Hearn: Kvichak delivering at home, and in Colombia, as well Builds for NYPD, U.S. Coast Guard and Oman

Somerset, MA-based Gladding-Hearn Shipbuilding has The recent acquisition of Kvichak Marine Industries by also been busy. “We just ? nished two signi? cant projects – Vigor Industrial gives the Paci? c West Coast giant not only ? ve patrol boats for New York City and seven patrol boats a new line of business, but also a signi? cant income stream, for the Colombian Navy,” Peter Duclos, president and di- courtesy of the maritime security market, both here and rector of business development, said. “The vessels for Co- abroad. There isn’t much Vigor doesn’t do anymore, and lombia were direct sale.” Seattle-based Kvichak is a big part of that puzzle. “We’re

The 70-foot, high-speed NYPD vessels have deep-V that, our deliveries to the Coast Guard total 59 vessels hull and squared-off bows, with fendering and knees in- since 2011.” stalled above the main deck for bow landings. They were Beyond their signi? cant domestic federal and municipal designed by C. Raymond Hunt and Associates in Massa- markets, however, Kvichak is also building two 19-meter, chusetts to respond to the terrorism threat on New York’s all-weather pilot boats for the Port of Duqm Company vast waterways system. Inside the ? ush-mounted wheel- SAOC in the Sultanate of Oman. “They will function as house, ballistic-resistant windows in the front, side and aft search-and-rescue and oil-spill-recovery vessels, in addi- provide 360-degree visibility. The boats’ ? y bridges offer views, too. A remote-control water cannon is mounted on pilothouse roofs. A command center includes video moni- tors, decontamination showers and seating for ? ve crew members. The boats have two berths, storage lockers and a small galley.

The NYPD vessels are powered by twin 12-cylinder

The Colombia Class vessels, 60-foot, deep-V hulled boats – also designed by C. Raymond Hunt – are of all alu- minum construction. Production began in March 2013, and the ? rst-in-class ARC Gorgonilla was delivered that year. A rotating davit, located above the water-level, re- cessed platform in the stern, is used for rescue operations.

The boat has Furuno radar and is equipped with a FLIR camera that can detect someone in the water at 500 to 800 meters. The vessel has sleeping accommodations for a crew of six.