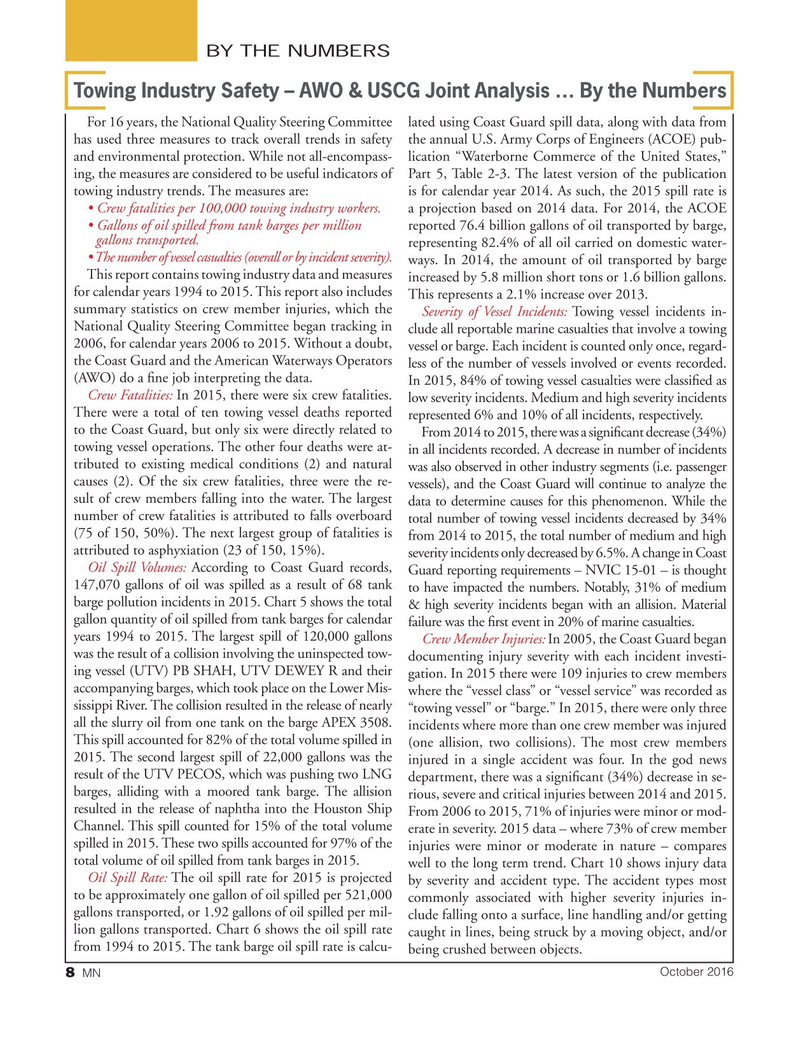 For 16 years, the National Quality Steering Committee lated using Coast Guard spill data, along with data from has used three measures to track overall trends in safety the annual U.S. Army Corps of Engineers (ACOE) pub- and environmental protection. While not all-encompass- lication “Waterborne Commerce of the United States,” ing, the measures are considered to be useful indicators of Part 5, Table 2-3. The latest version of the publication towing industry trends. The measures are: is for calendar year 2014. As such, the 2015 spill rate is • Crew fatalities per 100,000 towing industry workers. a projection based on 2014 data. For 2014, the ACOE • Gallons of oil spilled from tank barges per million reported 76.4 billion gallons of oil transported by barge, gallons transported.

representing 82.4% of all oil carried on domestic water- • The number of vessel casualties (overall or by incident severity).

ways. In 2014, the amount of oil transported by barge

This report contains towing industry data and measures increased by 5.8 million short tons or 1.6 billion gallons. for calendar years 1994 to 2015. This report also includes This represents a 2.1% increase over 2013.

summary statistics on crew member injuries, which the

National Quality Steering Committee began tracking in clude all reportable marine casualties that involve a towing 2006, for calendar years 2006 to 2015. Without a doubt, vessel or barge. Each incident is counted only once, regard- the Coast Guard and the American Waterways Operators less of the number of vessels involved or events recorded. (AWO) do a ? ne job interpreting the data.

There were a total of ten towing vessel deaths reported represented 6% and 10% of all incidents, respectively.

to the Coast Guard, but only six were directly related to

From 2014 to 2015, there was a signi? cant decrease (34%) towing vessel operations. The other four deaths were at- in all incidents recorded. A decrease in number of incidents tributed to existing medical conditions (2) and natural was also observed in other industry segments (i.e. passenger causes (2). Of the six crew fatalities, three were the re- vessels), and the Coast Guard will continue to analyze the sult of crew members falling into the water. The largest data to determine causes for this phenomenon. While the number of crew fatalities is attributed to falls overboard total number of towing vessel incidents decreased by 34% (75 of 150, 50%). The next largest group of fatalities is from 2014 to 2015, the total number of medium and high attributed to asphyxiation (23 of 150, 15%).

severity incidents only decreased by 6.5%. A change in Coast

Oil Spill Volumes: According to Coast Guard records, Guard reporting requirements – NVIC 15-01 – is thought 147,070 gallons of oil was spilled as a result of 68 tank to have impacted the numbers. Notably, 31% of medium barge pollution incidents in 2015. Chart 5 shows the total & high severity incidents began with an allision. Material gallon quantity of oil spilled from tank barges for calendar failure was the ? rst event in 20% of marine casualties.

Crew Member Injuries: In 2005, the Coast Guard began was the result of a collision involving the uninspected tow- documenting injury severity with each incident investi- ing vessel (UTV) PB SHAH, UTV DEWEY R and their gation. In 2015 there were 109 injuries to crew members accompanying barges, which took place on the Lower Mis- where the “vessel class” or “vessel service” was recorded as sissippi River. The collision resulted in the release of nearly “towing vessel” or “barge.” In 2015, there were only three all the slurry oil from one tank on the barge APEX 3508. incidents where more than one crew member was injured

This spill accounted for 82% of the total volume spilled in (one allision, two collisions). The most crew members 2015. The second largest spill of 22,000 gallons was the injured in a single accident was four. In the god news result of the UTV PECOS, which was pushing two LNG department, there was a signi? cant (34%) decrease in se- barges, alliding with a moored tank barge. The allision rious, severe and critical injuries between 2014 and 2015. resulted in the release of naphtha into the Houston Ship From 2006 to 2015, 71% of injuries were minor or mod-

Channel. This spill counted for 15% of the total volume erate in severity. 2015 data – where 73% of crew member spilled in 2015. These two spills accounted for 97% of the injuries were minor or moderate in nature – compares total volume of oil spilled from tank barges in 2015.

Oil Spill Rate: The oil spill rate for 2015 is projected by severity and accident type. The accident types most to be approximately one gallon of oil spilled per 521,000 commonly associated with higher severity injuries in- gallons transported, or 1.92 gallons of oil spilled per mil- clude falling onto a surface, line handling and/or getting lion gallons transported. Chart 6 shows the oil spill rate caught in lines, being struck by a moving object, and/or from 1994 to 2015. The tank barge oil spill rate is calcu- being crushed between objects.