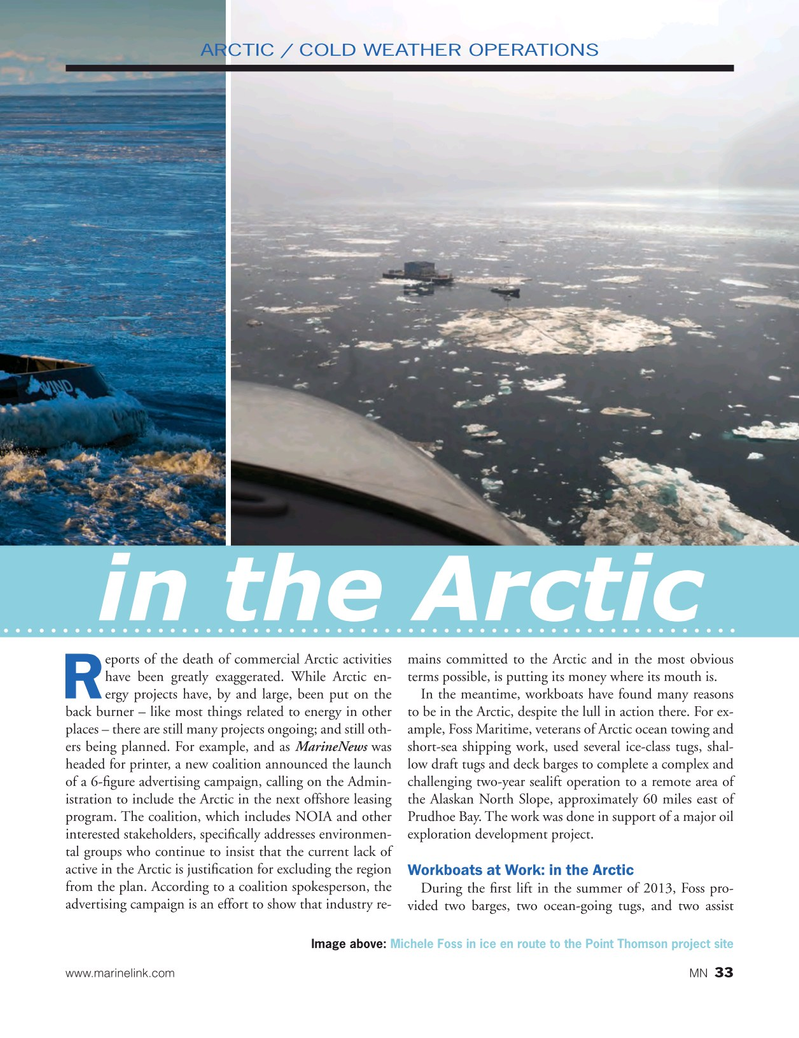 ARCTIC / COLD WEATHER OPERATIONS in the Arctic eports of the death of commercial Arctic activities mains committed to the Arctic and in the most obvious have been greatly exaggerated. While Arctic en- terms possible, is putting its money where its mouth is.

Rergy projects have, by and large, been put on the In the meantime, workboats have found many reasons back burner – like most things related to energy in other to be in the Arctic, despite the lull in action there. For ex- places – there are still many projects ongoing; and still oth- ample, Foss Maritime, veterans of Arctic ocean towing and ers being planned. For example, and as MarineNews was short-sea shipping work, used several ice-class tugs, shal- headed for printer, a new coalition announced the launch low draft tugs and deck barges to complete a complex and of a 6-? gure advertising campaign, calling on the Admin- challenging two-year sealift operation to a remote area of istration to include the Arctic in the next offshore leasing the Alaskan North Slope, approximately 60 miles east of program. The coalition, which includes NOIA and other Prudhoe Bay. The work was done in support of a major oil interested stakeholders, speci? cally addresses environmen- exploration development project. tal groups who continue to insist that the current lack of active in the Arctic is justi? cation for excluding the region

Workboats at Work: in the Arctic from the plan. According to a coalition spokesperson, the

During the ? rst lift in the summer of 2013, Foss pro- advertising campaign is an effort to show that industry re- vided two barges, two ocean-going tugs, and two assist