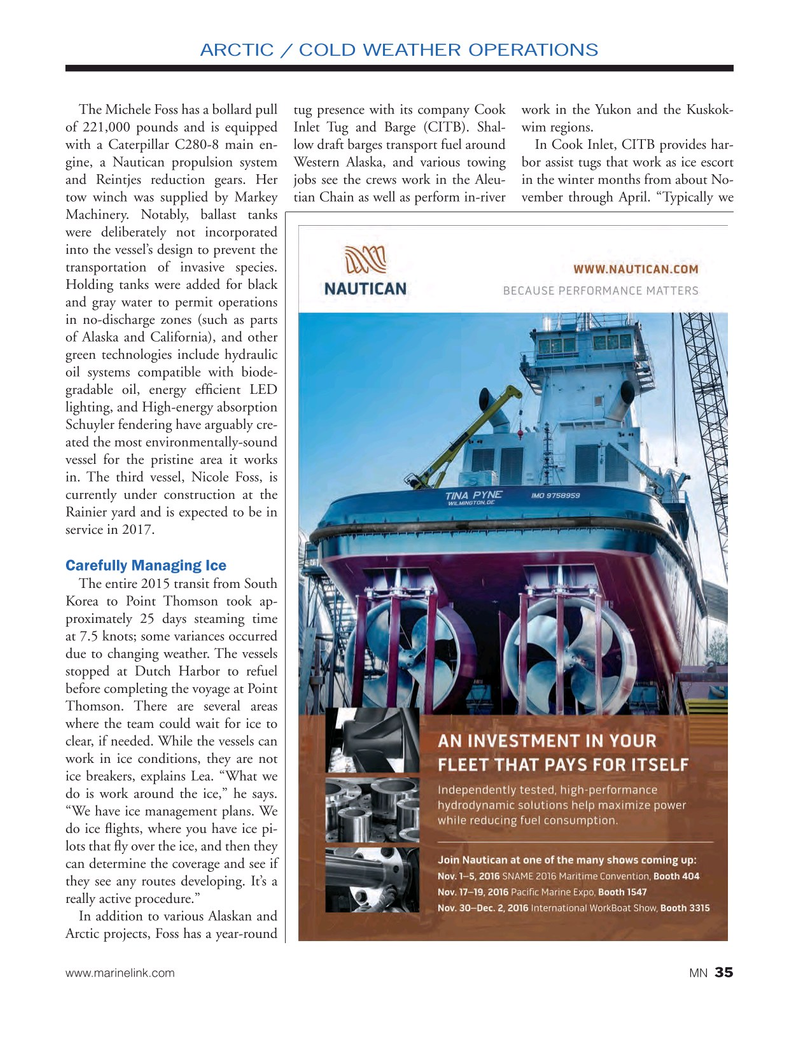 The Michele Foss has a bollard pull tug presence with its company Cook work in the Yukon and the Kuskok- of 221,000 pounds and is equipped Inlet Tug and Barge (CITB). Shal- wim regions.

with a Caterpillar C280-8 main en- low draft barges transport fuel around In Cook Inlet, CITB provides har- gine, a Nautican propulsion system Western Alaska, and various towing bor assist tugs that work as ice escort and Reintjes reduction gears. Her jobs see the crews work in the Aleu- in the winter months from about No- tow winch was supplied by Markey tian Chain as well as perform in-river vember through April. “Typically we

Machinery. Notably, ballast tanks were deliberately not incorporated into the vessel’s design to prevent the transportation of invasive species.

Holding tanks were added for black and gray water to permit operations in no-discharge zones (such as parts of Alaska and California), and other green technologies include hydraulic oil systems compatible with biode- gradable oil, energy ef? cient LED lighting, and High-energy absorption

Schuyler fendering have arguably cre- ated the most environmentally-sound vessel for the pristine area it works in. The third vessel, Nicole Foss, is currently under construction at the

Rainier yard and is expected to be in service in 2017.

The entire 2015 transit from South

Korea to Point Thomson took ap- proximately 25 days steaming time at 7.5 knots; some variances occurred due to changing weather. The vessels stopped at Dutch Harbor to refuel before completing the voyage at Point

Thomson. There are several areas where the team could wait for ice to clear, if needed. While the vessels can work in ice conditions, they are not ice breakers, explains Lea. “What we do is work around the ice,” he says. “We have ice management plans. We do ice ? ights, where you have ice pi- lots that ? y over the ice, and then they can determine the coverage and see if they see any routes developing. It’s a really active procedure.”

In addition to various Alaskan and