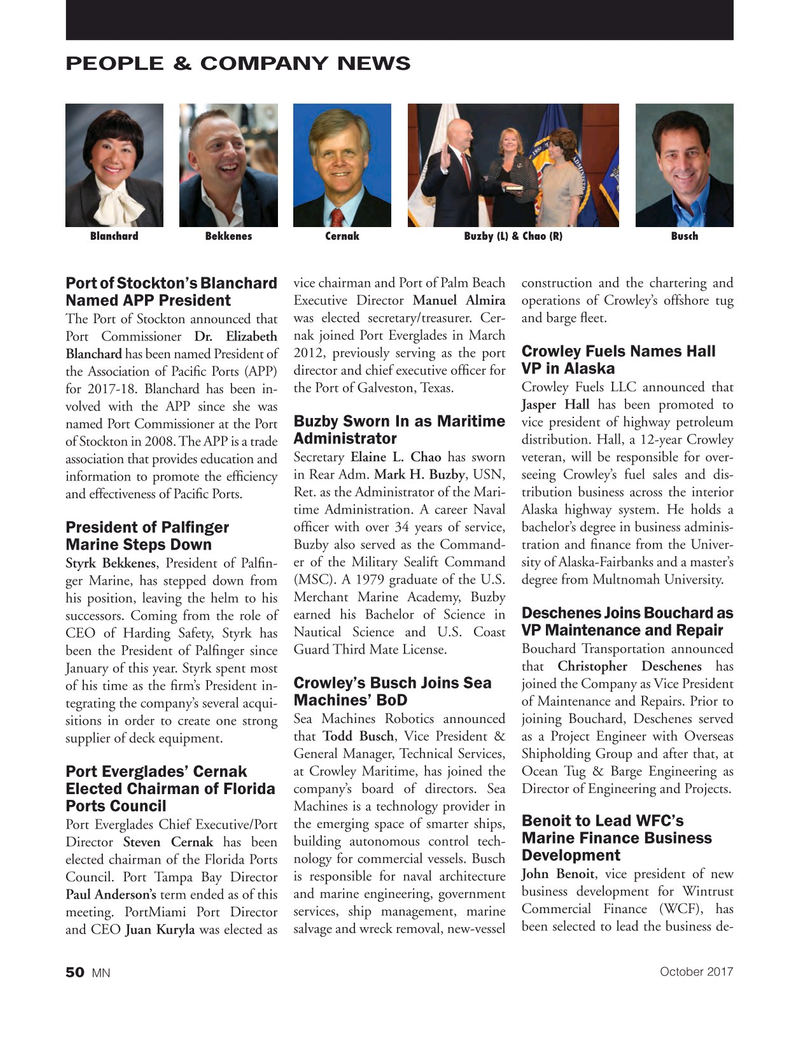 The Port of Stockton announced that was elected secretary/treasurer. Cer- and barge ? eet.

Blanchard has been named President of 2012, previously serving as the port

VP in Alaska the Association of Paci? c Ports (APP) director and chief executive of? cer for for 2017-18. Blanchard has been in- the Port of Galveston, Texas. Crowley Fuels LLC announced that

Buzby Sworn In as Maritime named Port Commissioner at the Port distribution. Hall, a 12-year Crowley

Administrator of Stockton in 2008. The APP is a trade association that provides education and Secretary Elaine L. Chao has sworn veteran, will be responsible for over- information to promote the ef? ciency in Rear Adm. Mark H. Buzby, USN, seeing Crowley’s fuel sales and dis-

Ret. as the Administrator of the Mari- tribution business across the interior and effectiveness of Paci? c Ports. time Administration. A career Naval Alaska highway system. He holds a of? cer with over 34 years of service, bachelor’s degree in business adminis-

Buzby also served as the Command- tration and ? nance from the Univer-

Styrk Bekkenes, President of Pal? n- er of the Military Sealift Command sity of Alaska-Fairbanks and a master’s ger Marine, has stepped down from (MSC). A 1979 graduate of the U.S. degree from Multnomah University. his position, leaving the helm to his Merchant Marine Academy, Buzby

Deschenes Joins Bouchard as successors. Coming from the role of earned his Bachelor of Science in

CEO of Harding Safety, Styrk has Nautical Science and U.S. Coast been the President of Pal? nger since Guard Third Mate License. Bouchard Transportation announced that Christopher Deschenes has

January of this year. Styrk spent most joined the Company as Vice President

Crowley’s Busch Joins Sea of his time as the ? rm’s President in- of Maintenance and Repairs. Prior to

General Manager, Technical Services, Shipholding Group and after that, at at Crowley Maritime, has joined the Ocean Tug & Barge Engineering as

Port Everglades’ Cernak company’s board of directors. Sea Director of Engineering and Projects.

Machines is a technology provider in