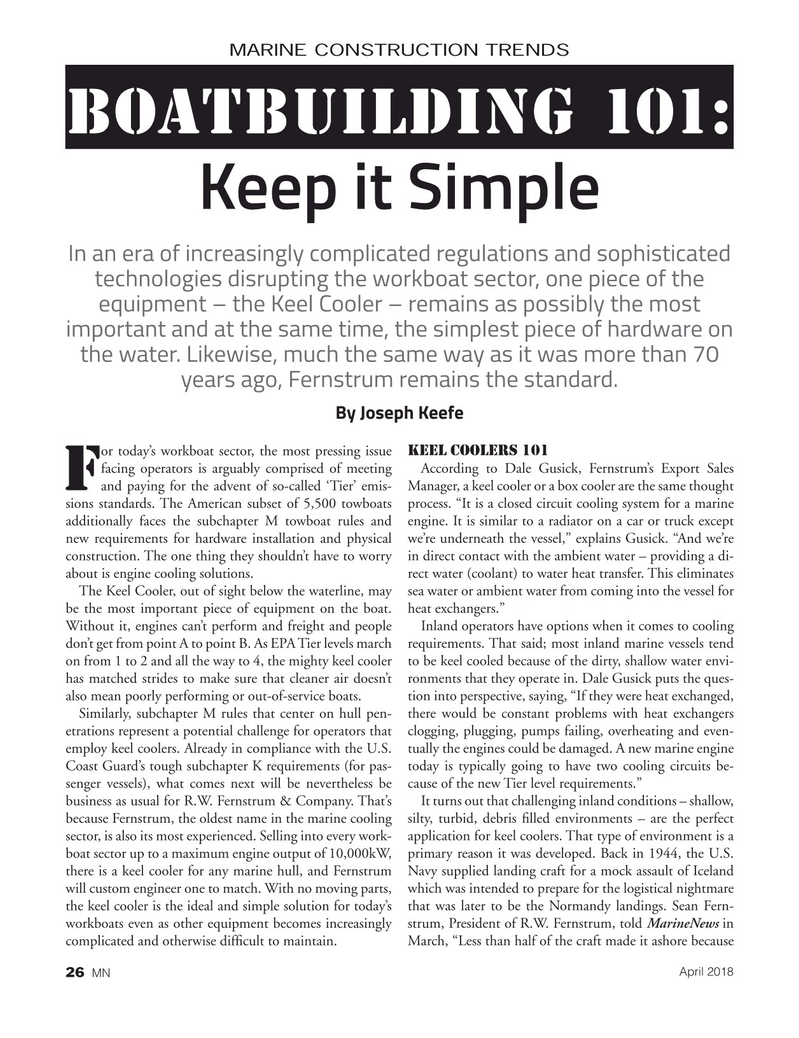 In an era of increasingly complicated regulations and sophisticated technologies disrupting the workboat sector, one piece of the equipment – the Keel Cooler – remains as possibly the most important and at the same time, the simplest piece of hardware on the water. Likewise, much the same way as it was more than 70 years ago, Fernstrum remains the standard.

By Joseph Keefe keel coolers 101 or today’s workboat sector, the most pressing issue facing operators is arguably comprised of meeting According to Dale Gusick, Fernstrum’s Export Sales fand paying for the advent of so-called ‘Tier’ emis- Manager, a keel cooler or a box cooler are the same thought sions standards. The American subset of 5,500 towboats process. “It is a closed circuit cooling system for a marine additionally faces the subchapter M towboat rules and engine. It is similar to a radiator on a car or truck except new requirements for hardware installation and physical we’re underneath the vessel,” explains Gusick. “And we’re construction. The one thing they shouldn’t have to worry in direct contact with the ambient water – providing a di- about is engine cooling solutions. rect water (coolant) to water heat transfer. This eliminates

The Keel Cooler, out of sight below the waterline, may sea water or ambient water from coming into the vessel for be the most important piece of equipment on the boat. heat exchangers.”

Without it, engines can’t perform and freight and people Inland operators have options when it comes to cooling don’t get from point A to point B. As EPA Tier levels march requirements. That said; most inland marine vessels tend on from 1 to 2 and all the way to 4, the mighty keel cooler to be keel cooled because of the dirty, shallow water envi- has matched strides to make sure that cleaner air doesn’t ronments that they operate in. Dale Gusick puts the ques- also mean poorly performing or out-of-service boats. tion into perspective, saying, “If they were heat exchanged,

Similarly, subchapter M rules that center on hull pen- there would be constant problems with heat exchangers etrations represent a potential challenge for operators that clogging, plugging, pumps failing, overheating and even- employ keel coolers. Already in compliance with the U.S. tually the engines could be damaged. A new marine engine

Coast Guard’s tough subchapter K requirements (for pas- today is typically going to have two cooling circuits be- senger vessels), what comes next will be nevertheless be cause of the new Tier level requirements.” business as usual for R.W. Fernstrum & Company. That’s It turns out that challenging inland conditions – shallow, because Fernstrum, the oldest name in the marine cooling silty, turbid, debris