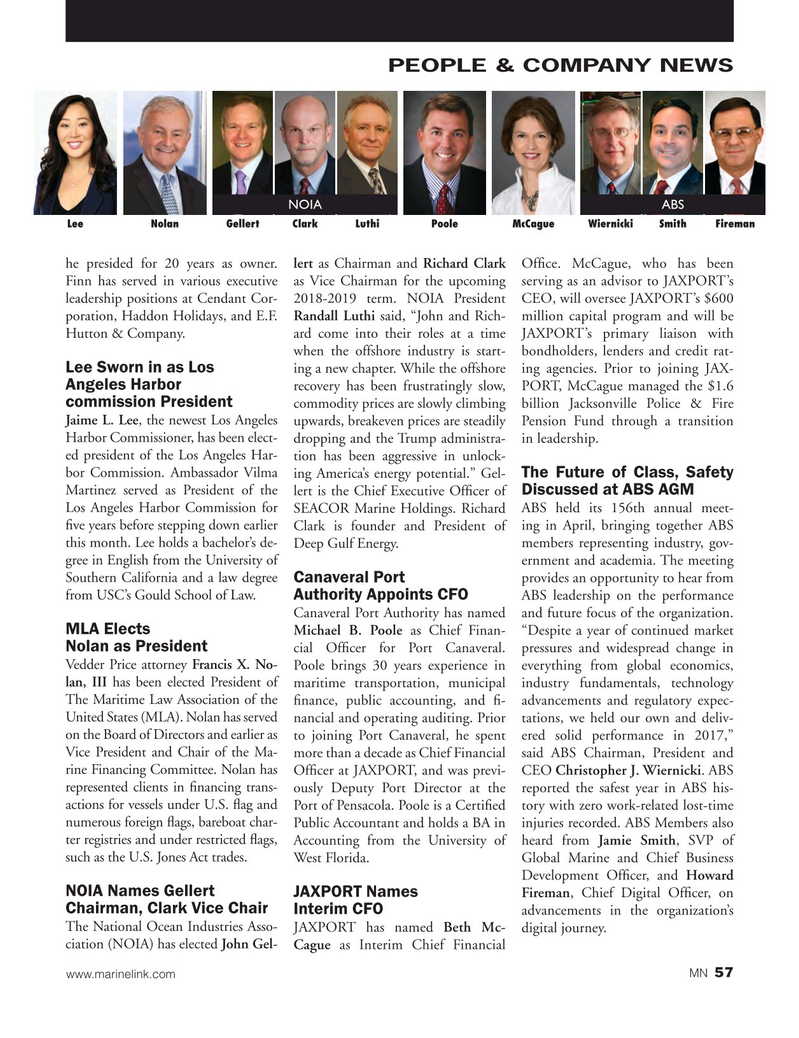 Nolan McCague Lee Poole Gellert Wiernicki Clark Smith Luthi Fireman he presided for 20 years as owner. lert as Chairman and Richard Clark Of? ce. McCague, who has been

Finn has served in various executive as Vice Chairman for the upcoming serving as an advisor to JAXPORT’s leadership positions at Cendant Cor- 2018-2019 term. NOIA President CEO, will oversee JAXPORT’s $600 poration, Haddon Holidays, and E.F. Randall Luthi said, “John and Rich- million capital program and will be

Hutton & Company. ard come into their roles at a time JAXPORT’s primary liaison with when the offshore industry is start- bondholders, lenders and credit rat-

Lee Sworn in as Los ing a new chapter. While the offshore ing agencies. Prior to joining JAX-

The Future of Class, Safety

Martinez served as President of the lert is the Chief Executive Of? cer of

Canaveral Port from USC’s Gould School of Law. ABS leadership on the performance

Canaveral Port Authority has named and future focus of the organization.

Michael B. Poole as Chief Finan- “Despite a year of continued market

Nolan as President cial Of? cer for Port Canaveral. pressures and widespread change in

The Maritime Law Association of the ? nance, public accounting, and ? - advancements and regulatory expec-

United States (MLA). Nolan has served nancial and operating auditing. Prior tations, we held our own and deliv- on the Board of Directors and earlier as to joining Port Canaveral, he spent ered solid performance in 2017,”

Vice President and Chair of the Ma- more than a decade as Chief Financial said ABS Chairman, President and rine Financing Committee. Nolan has Of? cer at JAXPORT, and was previ- CEO Christopher J. Wiernicki. ABS represented clients in ? nancing trans- ously Deputy Port Director at the reported the safest year in ABS his- actions for vessels under U.S. ? ag and Port of Pensacola. Poole is a Certi? ed tory with zero work-related lost-time numerous foreign ? ags, bareboat char- Public Accountant and holds a BA in injuries recorded. ABS Members also ter registries and under restricted ? ags, Accounting from the University of heard from Jamie Smith, SVP of such as the U.S. Jones Act trades. West Florida. Global Marine and Chief Business

Development Of? cer, and Howard

Fireman, Chief Digital Of? cer, on