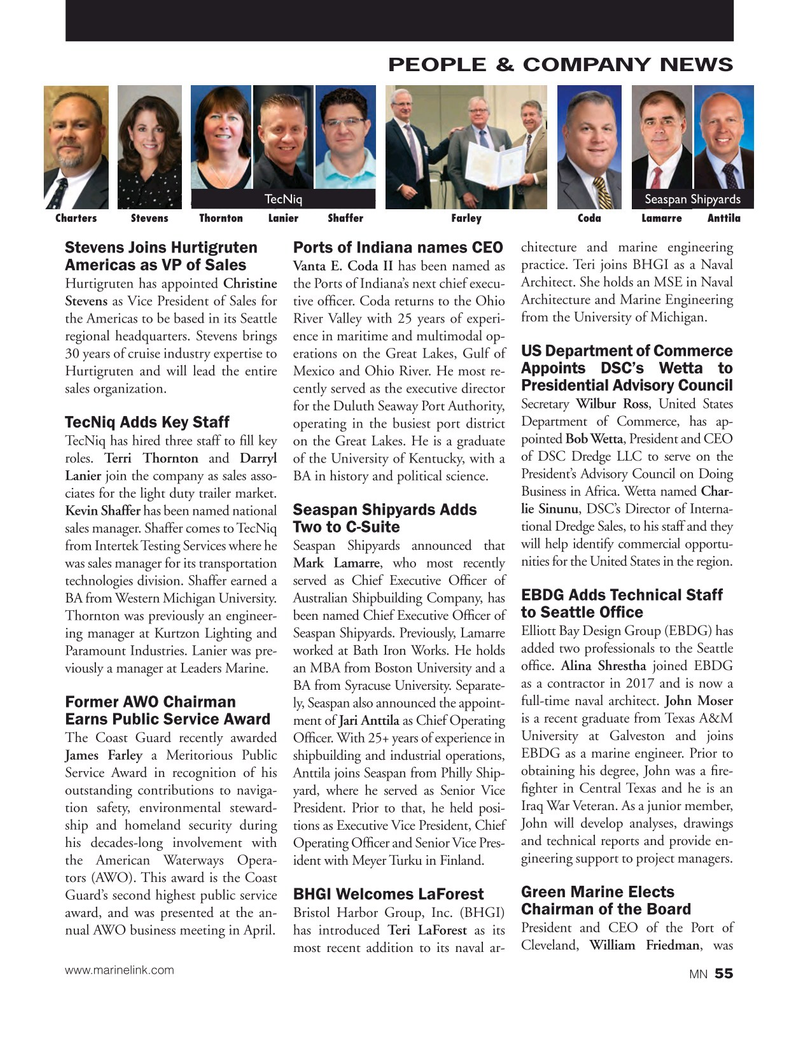 Americas as VP of Sales

Vanta E. Coda II has been named as practice. Teri joins BHGI as a Naval

Hurtigruten has appointed Christine the Ports of Indiana’s next chief execu- Architect. She holds an MSE in Naval

Stevens as Vice President of Sales for tive of? cer. Coda returns to the Ohio Architecture and Marine Engineering the Americas to be based in its Seattle River Valley with 25 years of experi- from the University of Michigan. regional headquarters. Stevens brings ence in maritime and multimodal op-

US Department of Commerce 30 years of cruise industry expertise to erations on the Great Lakes, Gulf of

Hurtigruten and will lead the entire Mexico and Ohio River. He most re-

TecNiq has hired three staff to ? ll key on the Great Lakes. He is a graduate pointed Bob Wetta, President and CEO roles. Terri Thornton and Darryl of the University of Kentucky, with a of DSC Dredge LLC to serve on the

Lanier join the company as sales asso- BA in history and political science.

Kevin Shaffer has been named national

Seaspan Shipyards Adds tional Dredge Sales, to his staff and they

Two to C-Suite sales manager. Shaffer comes to TecNiq from Intertek Testing Services where he Seaspan Shipyards announced that will help identify commercial opportu- was sales manager for its transportation Mark Lamarre, who most recently nities for the United States in the region. technologies division. Shaffer earned a served as Chief Executive Of? cer of

BA from Western Michigan University. Australian Shipbuilding Company, has to Seattle Of? ce

Paramount Industries. Lanier was pre- an MBA from Boston University and a of? ce. Alina Shrestha joined EBDG viously a manager at Leaders Marine.

as a contractor in 2017 and is now a BA from Syracuse University. Separate- full-time naval architect. John Moser ly, Seaspan also announced the appoint-

The Coast Guard recently awarded Of? cer. With 25+ years of experience in University at Galveston and joins

James Farley a Meritorious Public shipbuilding and industrial operations, EBDG as a marine engineer. Prior to obtaining his degree, John was a ? re-

Service Award in recognition of his Anttila joins Seaspan from Philly Ship- outstanding contributions to naviga- yard, where he served as Senior Vice ? ghter in Central Texas and he is an

Iraq War Veteran. As a junior member, tion safety, environmental steward- President. Prior to that, he held posi- ship and homeland security during tions as Executive Vice President, Chief John will develop analyses, drawings and technical reports and provide en- his decades-long involvement with Operating Of? cer and Senior Vice Pres- gineering support to project managers. the American Waterways Opera- ident with Meyer Turku in Finland. tors (AWO). This award is the Coast

Chairman of the Board award, and was presented at the an- Bristol Harbor Group, Inc. (BHGI) has introduced Teri LaForest as its President and CEO of the Port of nual AWO business meeting in April.

Cleveland, William Friedman, was most recent addition to its naval ar- www.marinelink.com 55