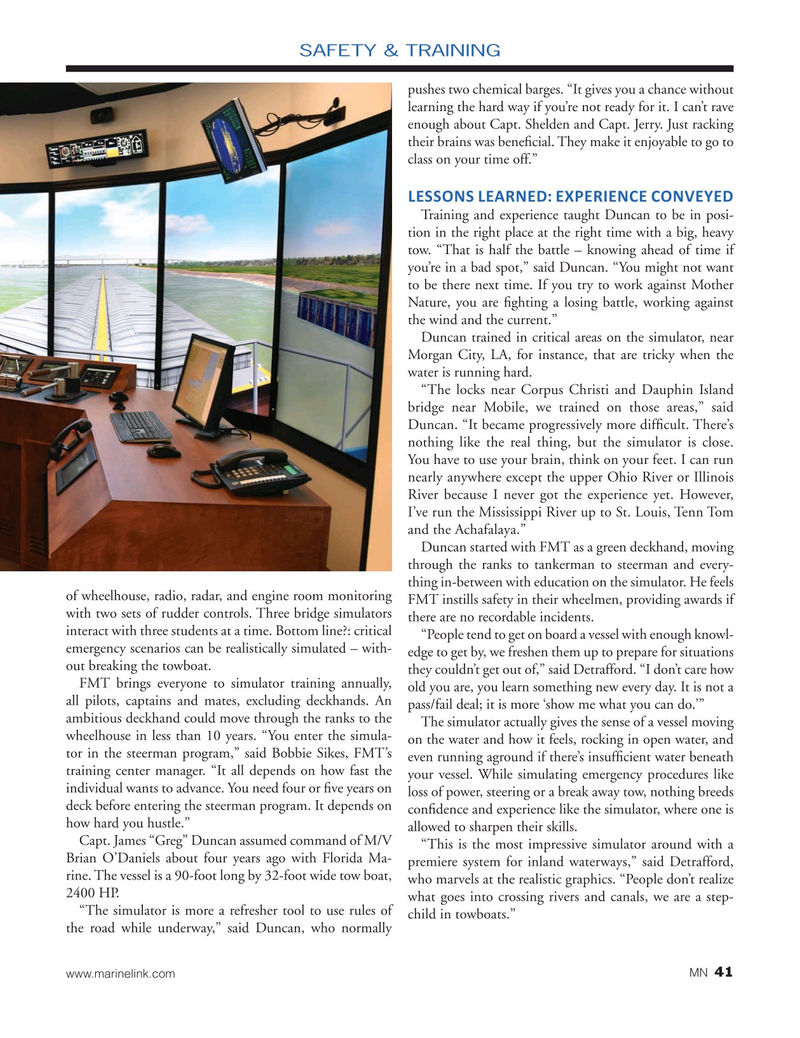 SAFETY & TRAINING pushes two chemical barges. “It gives you a chance without learning the hard way if you’re not ready for it. I can’t rave enough about Capt. Shelden and Capt. Jerry. Just racking their brains was bene? cial. They make it enjoyable to go to class on your time off.”

Training and experience taught Duncan to be in posi- tion in the right place at the right time with a big, heavy tow. “That is half the battle – knowing ahead of time if you’re in a bad spot,” said Duncan. “You might not want to be there next time. If you try to work against Mother

Nature, you are ? ghting a losing battle, working against the wind and the current.”

Duncan trained in critical areas on the simulator, near

Morgan City, LA, for instance, that are tricky when the water is running hard. “The locks near Corpus Christi and Dauphin Island bridge near Mobile, we trained on those areas,” said

Duncan. “It became progressively more dif? cult. There’s nothing like the real thing, but the simulator is close.

You have to use your brain, think on your feet. I can run nearly anywhere except the upper Ohio River or Illinois

River because I never got the experience yet. However,

I’ve run the Mississippi River up to St. Louis, Tenn Tom and the Achafalaya.”

Duncan started with FMT as a green deckhand, moving through the ranks to tankerman to steerman and every- thing in-between with education on the simulator. He feels of wheelhouse, radio, radar, and engine room monitoring FMT instills safety in their wheelmen, providing awards if with two sets of rudder controls. Three bridge simulators there are no recordable incidents. interact with three students at a time. Bottom line?: critical “People tend to get on board a vessel with enough knowl- emergency scenarios can be realistically simulated – with- edge to get by, we freshen them up to prepare for situations out breaking the towboat. they couldn’t get out of,” said Detrafford. “I don’t care how

FMT brings everyone to simulator training annually, old you are, you learn something new every day. It is not a all pilots, captains and mates, excluding deckhands. An pass/fail deal; it is more ‘show me what you can do.’” ambitious deckhand could move through the ranks to the

The simulator actually gives the sense of a vessel moving wheelhouse in less than 10 years. “You enter the simula- on the water and how it feels, rocking in open water, and tor in the steerman program,” said Bobbie Sikes, FMT’s even running aground if there’s insuf? cient water beneath training center manager. “It all depends on how fast the your vessel. While simulating emergency procedures like individual wants to advance. You need four or ? ve years on loss of power, steering or a break away tow, nothing breeds deck before entering the steerman program. It depends on con? dence and experience like the simulator, where one is how hard you hustle.” allowed to sharpen their skills.

Capt. James “Greg” Duncan assumed command of M/V “This is the most impressive simulator around with a

what goes into crossing rivers and canals, we are a step- “The simulator is more a refresher tool to use rules of child in towboats.” the road while underway,” said Duncan, who normally 41 www.marinelink.com MN