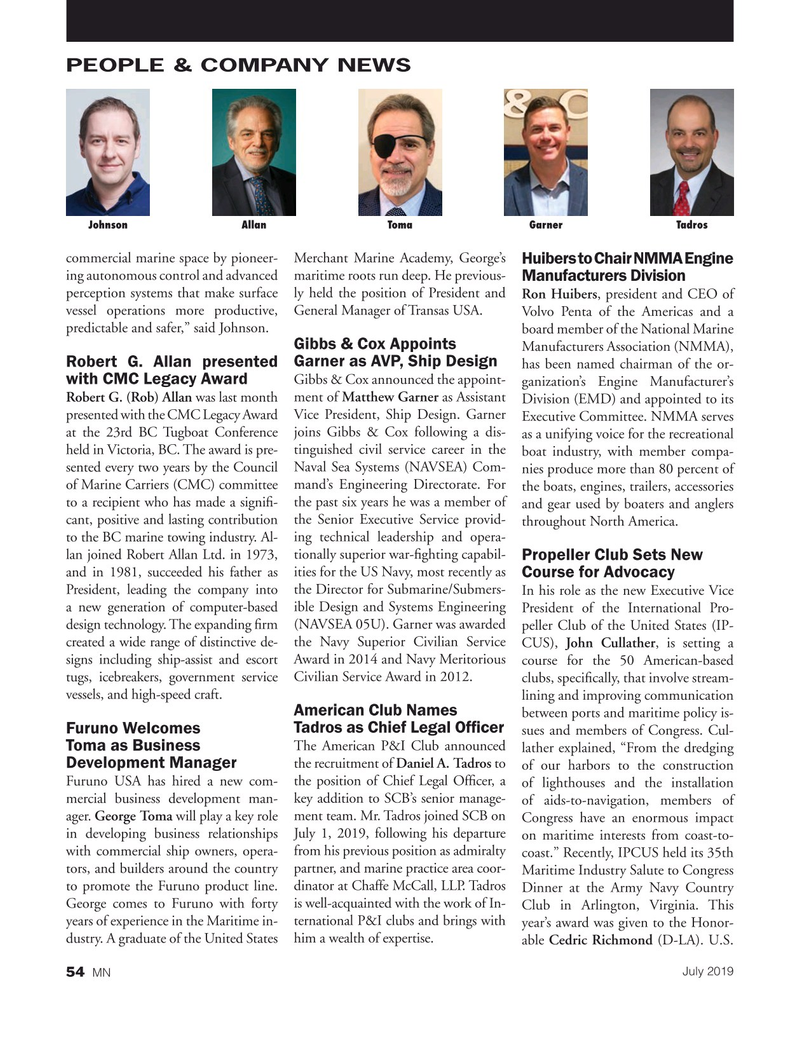 Manufacturers Division perception systems that make surface ly held the position of President and Ron Huibers, president and CEO of vessel operations more productive, General Manager of Transas USA. Volvo Penta of the Americas and a predictable and safer,” said Johnson. board member of the National Marine

Robert G. Allan presented Garner as AVP, Ship Design has been named chairman of the or-

Robert G. (Rob) Allan was last month ment of Matthew Garner as Assistant Division (EMD) and appointed to its presented with the CMC Legacy Award Vice President, Ship Design. Garner Executive Committee. NMMA serves at the 23rd BC Tugboat Conference joins Gibbs & Cox following a dis- as a unifying voice for the recreational tinguished civil service career in the boat industry, with member compa- held in Victoria, BC. The award is pre- sented every two years by the Council Naval Sea Systems (NAVSEA) Com- nies produce more than 80 percent of of Marine Carriers (CMC) committee mand’s Engineering Directorate. For the boats, engines, trailers, accessories the past six years he was a member of and gear used by boaters and anglers to a recipient who has made a signi? - cant, positive and lasting contribution the Senior Executive Service provid- throughout North America. to the BC marine towing industry. Al- ing technical leadership and opera- lan joined Robert Allan Ltd. in 1973, tionally superior war-? ghting capabil-

Propeller Club Sets New and in 1981, succeeded his father as ities for the US Navy, most recently as

President, leading the company into the Director for Submarine/Submers- In his role as the new Executive Vice a new generation of computer-based ible Design and Systems Engineering President of the International Pro- design technology. The expanding ? rm (NAVSEA 05U). Garner was awarded peller Club of the United States (IP- created a wide range of distinctive de- the Navy Superior Civilian Service CUS), John Cullather, is setting a signs including ship-assist and escort Award in 2014 and Navy Meritorious course for the 50 American-based tugs, icebreakers, government service Civilian Service Award in 2012. clubs, speci? cally, that involve stream- vessels, and high-speed craft. lining and improving communication

American Club Names between ports and maritime policy is-

The American P&I Club announced lather explained, “From the dredging

Toma as Business the recruitment of Daniel A. Tadros to of our harbors to the construction

Development Manager the position of Chief Legal Of? cer, a of lighthouses and the installation

Club in Arlington, Virginia. This ternational P&I clubs and brings with year’s award was given to the Honor- years of experience in the Maritime in- dustry. A graduate of the United States him a wealth of expertise. able Cedric Richmond (D-LA). U.S.