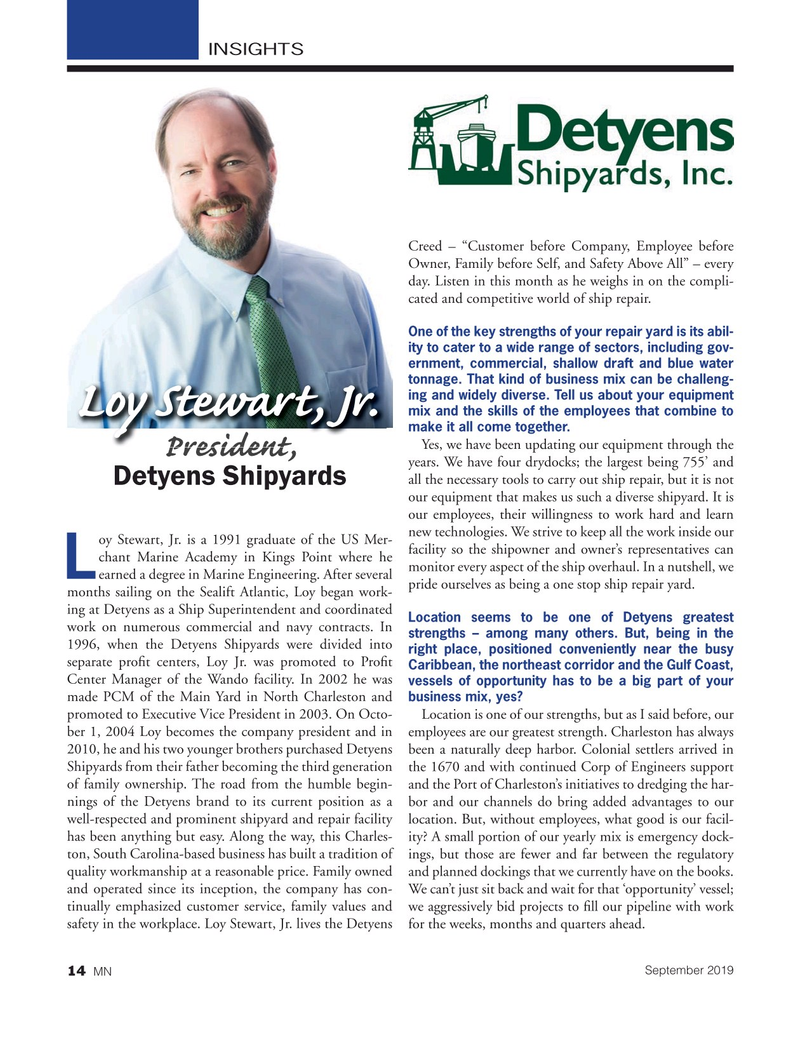 Creed – “Customer before Company, Employee before

Owner, Family before Self, and Safety Above All” – every day. Listen in this month as he weighs in on the compli- cated and competitive world of ship repair.

One of the key strengths of your repair yard is its abil- ity to cater to a wide range of sectors, including gov- ernment, commercial, shallow draft and blue water tonnage. That kind of business mix can be challeng- ing and widely diverse. Tell us about your equipment mix and the skills of the employees that combine to

make it all come together.

Yes, we have been updating our equipment through the

President, years. We have four drydocks; the largest being 755’ and all the necessary tools to carry out ship repair, but it is not

Detyens Shipyards our equipment that makes us such a diverse shipyard. It is our employees, their willingness to work hard and learn new technologies. We strive to keep all the work inside our oy Stewart, Jr. is a 1991 graduate of the US Mer- chant Marine Academy in Kings Point where he facility so the shipowner and owner’s representatives can monitor every aspect of the ship overhaul. In a nutshell, we

L earned a degree in Marine Engineering. After several pride ourselves as being a one stop ship repair yard. months sailing on the Sealift Atlantic, Loy began work- ing at Detyens as a Ship Superintendent and coordinated

Location seems to be one of Detyens greatest work on numerous commercial and navy contracts. In strengths – among many others. But, being in the 1996, when the Detyens Shipyards were divided into right place, positioned conveniently near the busy separate pro? t centers, Loy Jr. was promoted to Pro? t

Caribbean, the northeast corridor and the Gulf Coast,

Center Manager of the Wando facility. In 2002 he was vessels of opportunity has to be a big part of your made PCM of the Main Yard in North Charleston and business mix, yes?

promoted to Executive Vice President in 2003. On Octo- Location is one of our strengths, but as I said before, our ber 1, 2004 Loy becomes the company president and in employees are our greatest strength. Charleston has always 2010, he and his two younger brothers purchased Detyens been a naturally deep harbor. Colonial settlers arrived in

Shipyards from their father becoming the third generation the 1670 and with continued Corp of Engineers support of family ownership. The road from the humble begin- and the Port of Charleston’s initiatives to dredging the har- nings of the Detyens brand to its current position as a bor and our channels do bring added advantages to our well-respected and prominent shipyard and repair facility location. But, without employees, what good is our facil- has been anything but easy. Along the way, this Charles- ity? A small portion of our yearly mix is emergency dock- ton, South Carolina-based business has built a tradition of ings, but those are fewer and far between the regulatory quality workmanship at a reasonable price. Family owned and planned dockings that we currently have on the books. and operated since its inception, the company has con- We can’t just sit back and wait for that ‘opportunity’ vessel; tinually emphasized customer service, family values and we aggressively bid projects to ? ll our pipeline with work safety in the workplace. Loy Stewart, Jr. lives the Detyens for the weeks, months and quarters ahead.