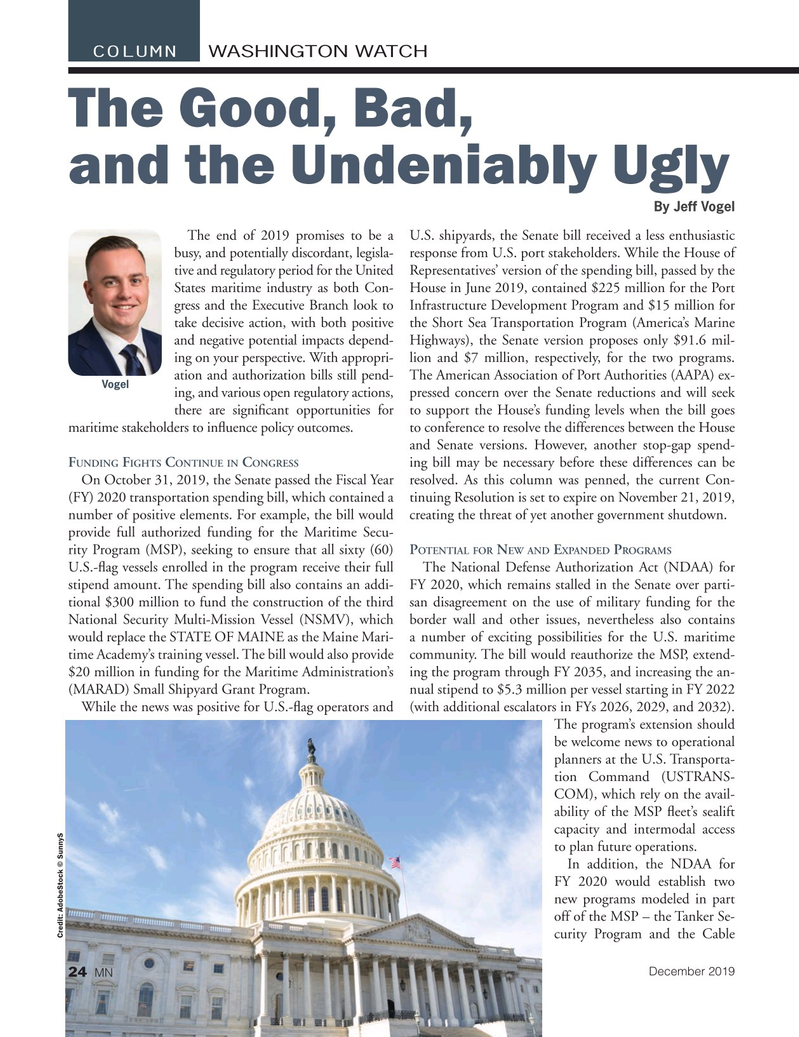 The Good, Bad, and the Undeniably Ugly

The end of 2019 promises to be a U.S. shipyards, the Senate bill received a less enthusiastic busy, and potentially discordant, legisla- response from U.S. port stakeholders. While the House of tive and regulatory period for the United Representatives’ version of the spending bill, passed by the

States maritime industry as both Con- House in June 2019, contained $225 million for the Port gress and the Executive Branch look to Infrastructure Development Program and $15 million for take decisive action, with both positive the Short Sea Transportation Program (America’s Marine and negative potential impacts depend- Highways), the Senate version proposes only $91.6 mil- ing on your perspective. With appropri- lion and $7 million, respectively, for the two programs. ation and authorization bills still pend- The American Association of Port Authorities (AAPA) ex-

Vogel ing, and various open regulatory actions, pressed concern over the Senate reductions and will seek there are signi? cant opportunities for to support the House’s funding levels when the bill goes maritime stakeholders to in? uence policy outcomes. to conference to resolve the differences between the House and Senate versions. However, another stop-gap spend-

On October 31, 2019, the Senate passed the Fiscal Year resolved. As this column was penned, the current Con- (FY) 2020 transportation spending bill, which contained a tinuing Resolution is set to expire on November 21, 2019, number of positive elements. For example, the bill would creating the threat of yet another government shutdown.

OTENTIAL FOR EW AND XPANDED ROGRAMS

U.S.-? ag vessels enrolled in the program receive their full The National Defense Authorization Act (NDAA) for stipend amount. The spending bill also contains an addi- FY 2020, which remains stalled in the Senate over parti- tional $300 million to fund the construction of the third san disagreement on the use of military funding for the

National Security Multi-Mission Vessel (NSMV), which border wall and other issues, nevertheless also contains would replace the STATE OF MAINE as the Maine Mari- a number of exciting possibilities for the U.S. maritime time Academy’s training vessel. The bill would also provide community. The bill would reauthorize the MSP, extend- $20 million in funding for the Maritime Administration’s ing the program through FY 2035, and increasing the an- (MARAD) Small Shipyard Grant Program. nual stipend to $5.3 million per vessel starting in FY 2022

The program’s extension should be welcome news to operational planners at the U.S. Transporta- tion Command (USTRANS-

COM), which rely on the avail- ability of the MSP ? eet’s sealift capacity and intermodal access to plan future operations.

In addition, the NDAA for