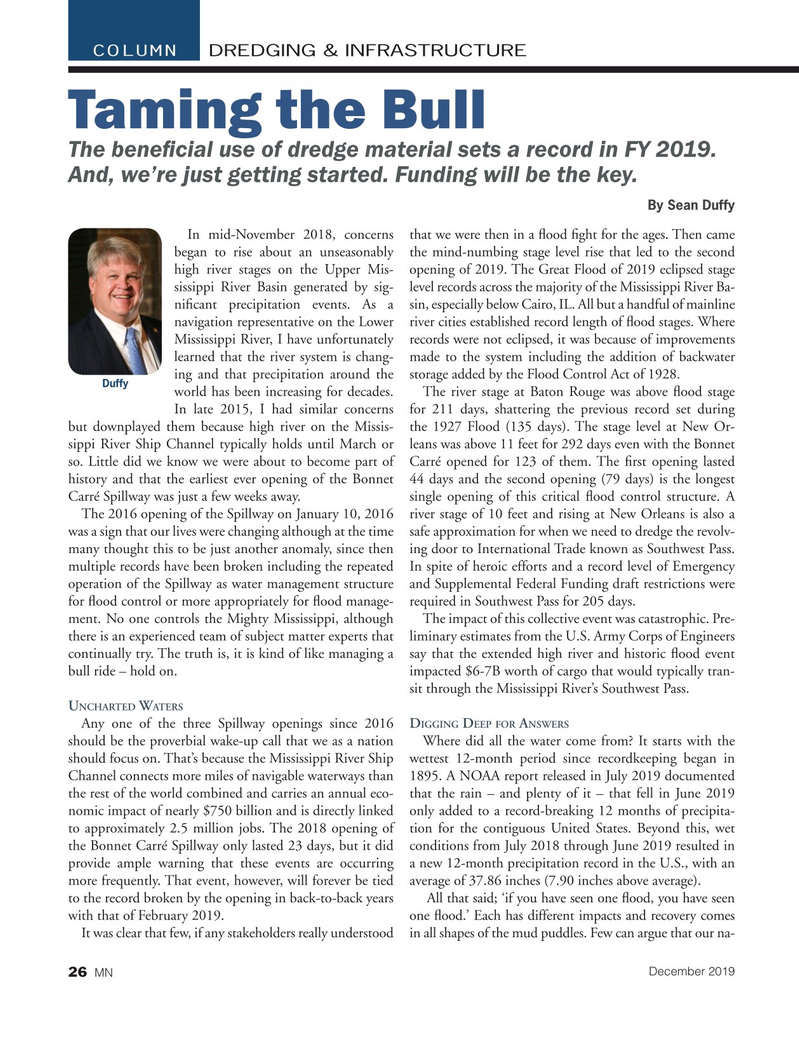 The bene? cial use of dredge material sets a record in FY 2019.

And, we’re just getting started. Funding will be the key.

In mid-November 2018, concerns that we were then in a ? ood ? ght for the ages. Then came began to rise about an unseasonably the mind-numbing stage level rise that led to the second high river stages on the Upper Mis- opening of 2019. The Great Flood of 2019 eclipsed stage sissippi River Basin generated by sig- level records across the majority of the Mississippi River Ba- ni? cant precipitation events. As a sin, especially below Cairo, IL. All but a handful of mainline navigation representative on the Lower river cities established record length of ? ood stages. Where

Mississippi River, I have unfortunately records were not eclipsed, it was because of improvements learned that the river system is chang- made to the system including the addition of backwater ing and that precipitation around the storage added by the Flood Control Act of 1928.

Duffy world has been increasing for decades. The river stage at Baton Rouge was above ? ood stage

In late 2015, I had similar concerns for 211 days, shattering the previous record set during but downplayed them because high river on the Missis- the 1927 Flood (135 days). The stage level at New Or- sippi River Ship Channel typically holds until March or leans was above 11 feet for 292 days even with the Bonnet so. Little did we know we were about to become part of Carré opened for 123 of them. The ? rst opening lasted history and that the earliest ever opening of the Bonnet 44 days and the second opening (79 days) is the longest

Carré Spillway was just a few weeks away. single opening of this critical ? ood control structure. A

The 2016 opening of the Spillway on January 10, 2016 river stage of 10 feet and rising at New Orleans is also a was a sign that our lives were changing although at the time safe approximation for when we need to dredge the revolv- many thought this to be just another anomaly, since then ing door to International Trade known as Southwest Pass. multiple records have been broken including the repeated In spite of heroic efforts and a record level of Emergency operation of the Spillway as water management structure and Supplemental Federal Funding draft restrictions were for ? ood control or more appropriately for ? ood manage- required in Southwest Pass for 205 days.

ment. No one controls the Mighty Mississippi, although The impact of this collective event was catastrophic. Pre- there is an experienced team of subject matter experts that liminary estimates from the U.S. Army Corps of Engineers continually try. The truth is, it is kind of like managing a say that the extended high river and historic ? ood event bull ride – hold on. impacted $6-7B worth of cargo that would typically tran- sit through the Mississippi River’s Southwest Pass.

Any one of the three Spillway openings since 2016 D D A should be the proverbial wake-up call that we as a nation Where did all the water come from? It starts with the should focus on. That’s because the Mississippi River Ship wettest 12-month period since recordkeeping began in

Channel connects more miles of navigable waterways than 1895. A NOAA report released in July 2019 documented the rest of the world combined and carries an annual eco- that the rain – and plenty of it – that fell in June 2019 nomic impact of nearly $750 billion and is directly linked only added to a record-breaking 12 months of precipita- to approximately 2.5 million jobs. The 2018 opening of tion for the contiguous United States. Beyond this, wet the Bonnet Carré Spillway only lasted 23 days, but it did conditions from July 2018 through June 2019 resulted in provide ample warning that these events are occurring a new 12-month precipitation record in the U.S., with an more frequently. That event, however, will forever be tied average of 37.86 inches (7.90 inches above average).

to the record broken by the opening in back-to-back years All that said; ‘if you have seen one ? ood, you have seen with that of February 2019. one ? ood.’ Each has different impacts and recovery comes

It was clear that few, if any stakeholders really understood in all shapes of the mud puddles. Few can argue that our na-