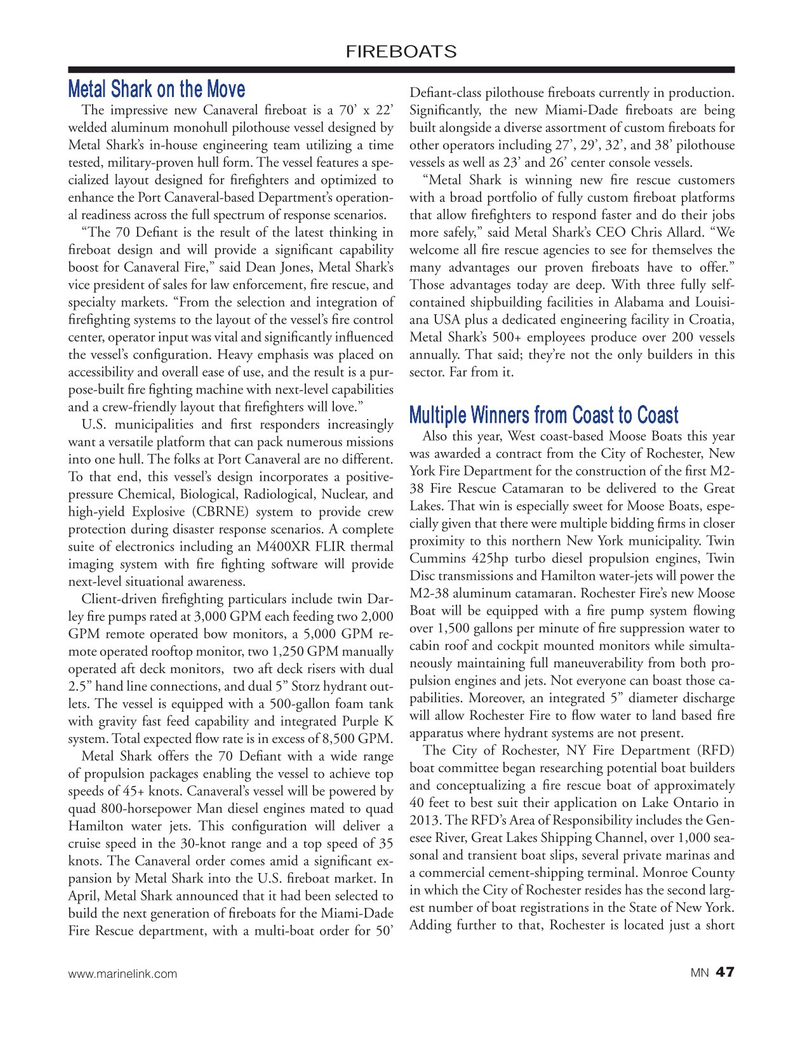 Metal Shark on the Move

The impressive new Canaveral ? reboat is a 70’ x 22’ Signi? cantly, the new Miami-Dade ? reboats are being welded aluminum monohull pilothouse vessel designed by built alongside a diverse assortment of custom ? reboats for

Metal Shark’s in-house engineering team utilizing a time other operators including 27’, 29’, 32’, and 38’ pilothouse tested, military-proven hull form. The vessel features a spe- vessels as well as 23’ and 26’ center console vessels.

cialized layout designed for ? re? ghters and optimized to “Metal Shark is winning new ? re rescue customers enhance the Port Canaveral-based Department’s operation- with a broad portfolio of fully custom ? reboat platforms al readiness across the full spectrum of response scenarios. that allow ? re? ghters to respond faster and do their jobs “The 70 De? ant is the result of the latest thinking in more safely,” said Metal Shark’s CEO Chris Allard. “We ? reboat design and will provide a signi? cant capability welcome all ? re rescue agencies to see for themselves the boost for Canaveral Fire,” said Dean Jones, Metal Shark’s many advantages our proven ? reboats have to offer.” vice president of sales for law enforcement, ? re rescue, and Those advantages today are deep. With three fully self- specialty markets. “From the selection and integration of contained shipbuilding facilities in Alabama and Louisi- ? re? ghting systems to the layout of the vessel’s ? re control ana USA plus a dedicated engineering facility in Croatia, center, operator input was vital and signi? cantly in? uenced Metal Shark’s 500+ employees produce over 200 vessels the vessel’s con? guration. Heavy emphasis was placed on annually. That said; they’re not the only builders in this accessibility and overall ease of use, and the result is a pur- sector. Far from it.

pose-built ? re ? ghting machine with next-level capabilities and a crew-friendly layout that ? re? ghters will love.”

Multiple Winners from Coast to Coast

Also this year, West coast-based Moose Boats this year want a versatile platform that can pack numerous missions into one hull. The folks at Port Canaveral are no different. was awarded a contract from the City of Rochester, New

York Fire Department for the construction of the ? rst M2-

To that end, this vessel’s design incorporates a positive- pressure Chemical, Biological, Radiological, Nuclear, and 38 Fire Rescue Catamaran to be delivered to the Great high-yield Explosive (CBRNE) system to provide crew Lakes. That win is especially sweet for Moose Boats, espe- protection during disaster response scenarios. A complete cially given that there were multiple bidding ? rms in closer suite of electronics including an M400XR FLIR thermal proximity to this northern New York municipality. Twin imaging system with ? re ? ghting software will provide Cummins 425hp turbo diesel propulsion engines, Twin

Client-driven ? re? ghting particulars include twin Dar- ley ? re pumps rated at 3,000 GPM each feeding two 2,000 Boat will be equipped with a ? re pump system ? owing over 1,500 gallons per minute of ? re suppression water to

Metal Shark offers the 70 De? ant with a wide range of propulsion packages enabling the vessel to achieve top boat committee began researching potential boat builders speeds of 45+ knots. Canaveral’s vessel will be powered by and conceptualizing a ? re rescue boat of approximately quad 800-horsepower Man diesel engines mated to quad 40 feet to best suit their application on Lake Ontario in

Hamilton water jets. This con? guration will deliver a 2013. The RFD’s Area of Responsibility includes the Gen- cruise speed in the 30-knot range and a top speed of 35 esee River, Great Lakes Shipping Channel, over 1,000 sea- sonal and transient boat slips, several private marinas and knots. The Canaveral order comes amid a signi? cant ex- pansion by Metal Shark into the U.S. ? reboat market. In a commercial cement-shipping terminal. Monroe County

April, Metal Shark announced that it had been selected to in which the City of Rochester resides has the second larg- build the next generation of ? reboats for the Miami-Dade est number of boat registrations in the State of New York.

Fire Rescue department, with a multi-boat order for 50’ Adding further to that, Rochester is located just a short 47 www.marinelink.com MN