Read this page in Pdf, Flash or Html5 edition of May 2021 Marine News Magazine 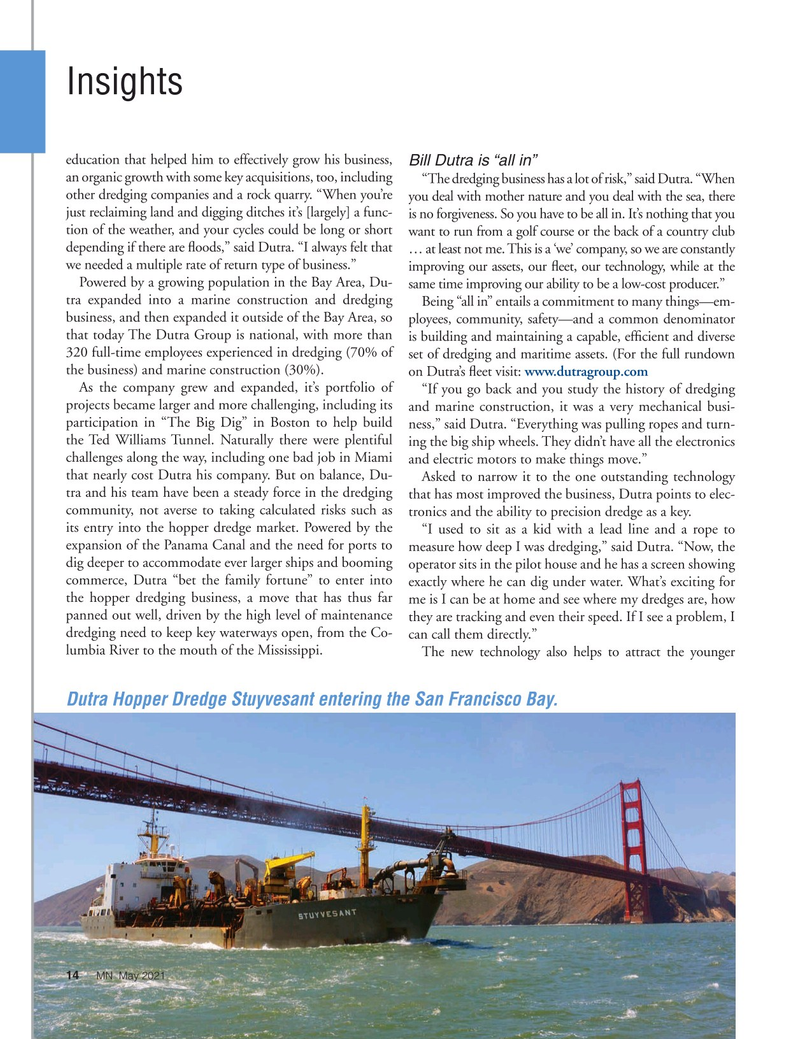 Insights education that helped him to effectively grow his business,

Bill Dutra is “all in” an organic growth with some key acquisitions, too, including “The dredging business has a lot of risk,” said Dutra. “When other dredging companies and a rock quarry. “When you’re you deal with mother nature and you deal with the sea, there just reclaiming land and digging ditches it’s [largely] a func- is no forgiveness. So you have to be all in. It’s nothing that you tion of the weather, and your cycles could be long or short want to run from a golf course or the back of a country club depending if there are ? oods,” said Dutra. “I always felt that … at least not me. This is a ‘we’ company, so we are constantly we needed a multiple rate of return type of business.” improving our assets, our ? eet, our technology, while at the

Powered by a growing population in the Bay Area, Du- same time improving our ability to be a low-cost producer.” tra expanded into a marine construction and dredging

Being “all in” entails a commitment to many things—em- business, and then expanded it outside of the Bay Area, so ployees, community, safety—and a common denominator that today The Dutra Group is national, with more than is building and maintaining a capable, ef? cient and diverse 320 full-time employees experienced in dredging (70% of set of dredging and maritime assets. (For the full rundown the business) and marine construction (30%).

As the company grew and expanded, it’s portfolio of “If you go back and you study the history of dredging projects became larger and more challenging, including its and marine construction, it was a very mechanical busi- participation in “The Big Dig” in Boston to help build ness,” said Dutra. “Everything was pulling ropes and turn- the Ted Williams Tunnel. Naturally there were plentiful ing the big ship wheels. They didn’t have all the electronics challenges along the way, including one bad job in Miami and electric motors to make things move.” that nearly cost Dutra his company. But on balance, Du-

Asked to narrow it to the one outstanding technology tra and his team have been a steady force in the dredging that has most improved the business, Dutra points to elec- community, not averse to taking calculated risks such as tronics and the ability to precision dredge as a key.

its entry into the hopper dredge market. Powered by the “I used to sit as a kid with a lead line and a rope to expansion of the Panama Canal and the need for ports to measure how deep I was dredging,” said Dutra. “Now, the dig deeper to accommodate ever larger ships and booming operator sits in the pilot house and he has a screen showing commerce, Dutra “bet the family fortune” to enter into exactly where he can dig under water. What’s exciting for the hopper dredging business, a move that has thus far me is I can be at home and see where my dredges are, how panned out well, driven by the high level of maintenance they are tracking and even their speed. If I see a problem, I dredging need to keep key waterways open, from the Co- can call them directly.” lumbia River to the mouth of the Mississippi.

The new technology also helps to attract the younger