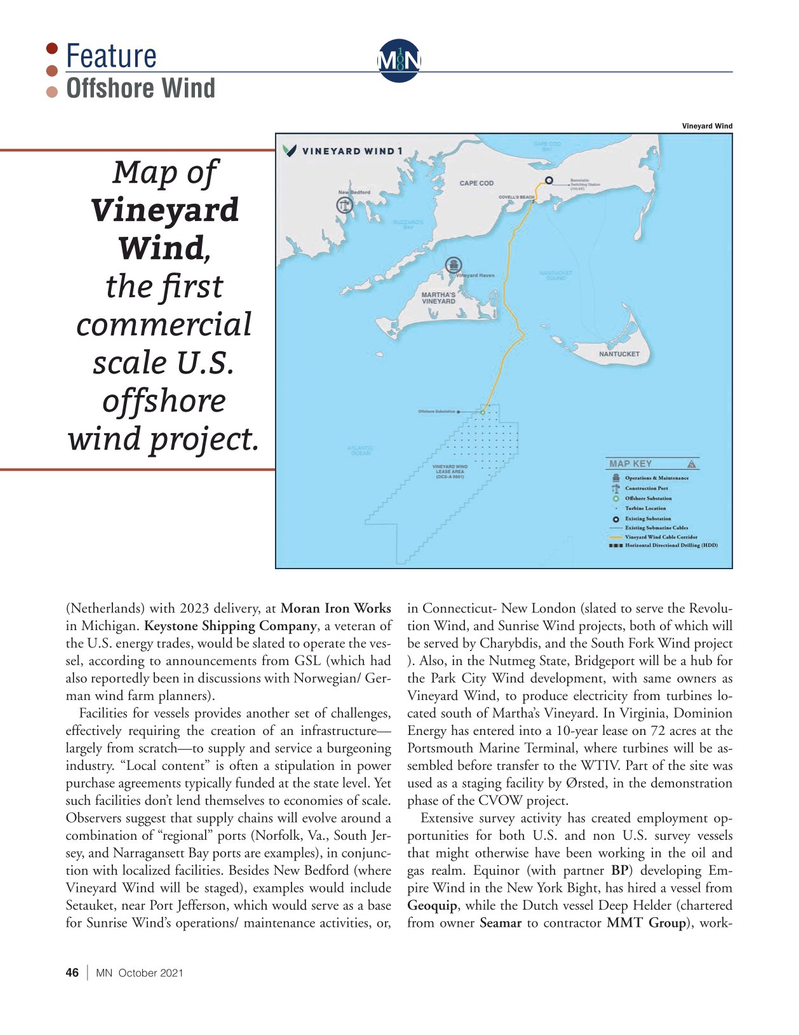 (Netherlands) with 2023 delivery, at Moran Iron Works in Connecticut- New London (slated to serve the Revolu- in Michigan. Keystone Shipping Company, a veteran of tion Wind, and Sunrise Wind projects, both of which will the U.S. energy trades, would be slated to operate the ves- be served by Charybdis, and the South Fork Wind project sel, according to announcements from GSL (which had ). Also, in the Nutmeg State, Bridgeport will be a hub for also reportedly been in discussions with Norwegian/ Ger- the Park City Wind development, with same owners as man wind farm planners). Vineyard Wind, to produce electricity from turbines lo-

Facilities for vessels provides another set of challenges, cated south of Martha’s Vineyard. In Virginia, Dominion effectively requiring the creation of an infrastructure— Energy has entered into a 10-year lease on 72 acres at the largely from scratch—to supply and service a burgeoning Portsmouth Marine Terminal, where turbines will be as- industry. “Local content” is often a stipulation in power sembled before transfer to the WTIV. Part of the site was purchase agreements typically funded at the state level. Yet used as a staging facility by Ørsted, in the demonstration such facilities don’t lend themselves to economies of scale. phase of the CVOW project.

Observers suggest that supply chains will evolve around a Extensive survey activity has created employment op- combination of “regional” ports (Norfolk, Va., South Jer- portunities for both U.S. and non U.S. survey vessels sey, and Narragansett Bay ports are examples), in conjunc- that might otherwise have been working in the oil and tion with localized facilities. Besides New Bedford (where gas realm. Equinor (with partner BP) developing Em-

Vineyard Wind will be staged), examples would include pire Wind in the New York Bight, has hired a vessel from

Setauket, near Port Jefferson, which would serve as a base Geoquip, while the Dutch vessel Deep Helder (chartered for Sunrise Wind’s operations/ maintenance activities, or, from owner Seamar to contractor MMT Group), work- 46 | MN October 2021