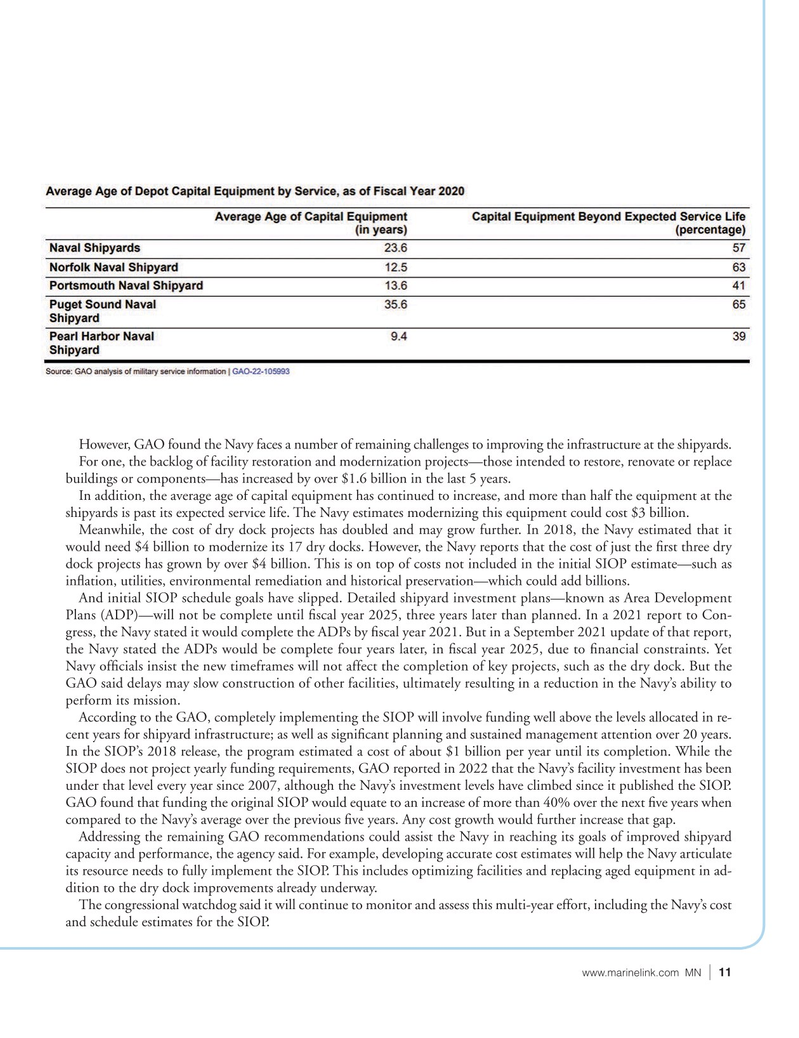 However, GAO found the Navy faces a number of remaining challenges to improving the infrastructure at the shipyards.

For one, the backlog of facility restoration and modernization projects—those intended to restore, renovate or replace buildings or components—has increased by over $1.6 billion in the last 5 years.

In addition, the average age of capital equipment has continued to increase, and more than half the equipment at the shipyards is past its expected service life. The Navy estimates modernizing this equipment could cost $3 billion.

Meanwhile, the cost of dry dock projects has doubled and may grow further. In 2018, the Navy estimated that it would need $4 billion to modernize its 17 dry docks. However, the Navy reports that the cost of just the ? rst three dry dock projects has grown by over $4 billion. This is on top of costs not included in the initial SIOP estimate—such as in? ation, utilities, environmental remediation and historical preservation—which could add billions.

Navy of? cials insist the new timeframes will not affect the completion of key projects, such as the dry dock. But the

GAO said delays may slow construction of other facilities, ultimately resulting in a reduction in the Navy’s ability to perform its mission.

According to the GAO, completely implementing the SIOP will involve funding well above the levels allocated in re- cent years for shipyard infrastructure; as well as signi? cant planning and sustained management attention over 20 years.

In the SIOP’s 2018 release, the program estimated a cost of about $1 billion per year until its completion. While the

SIOP does not project yearly funding requirements, GAO reported in 2022 that the Navy’s facility investment has been under that level every year since 2007, although the Navy’s investment levels have climbed since it published the SIOP.

GAO found that funding the original SIOP would equate to an increase of more than 40% over the next ? ve years when compared to the Navy’s average over the previous ? ve years. Any cost growth would further increase that gap.

Addressing the remaining GAO recommendations could assist the Navy in reaching its goals of improved shipyard capacity and performance, the agency said. For example, developing accurate cost estimates will help the Navy articulate its resource needs to fully implement the SIOP. This includes optimizing facilities and replacing aged equipment in ad- dition to the dry dock improvements already underway.

The congressional watchdog said it will continue to monitor and assess this multi-year effort, including the Navy’s cost and schedule estimates for the SIOP.