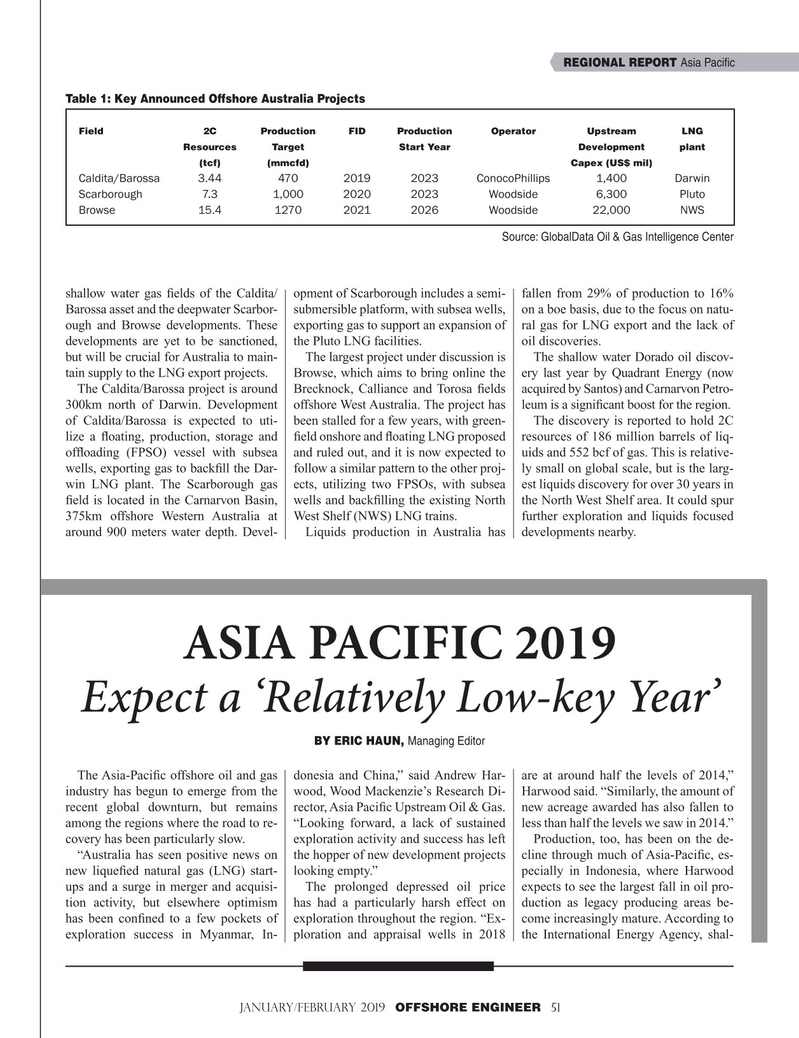 Barossa asset and the deepwater Scarbor- submersible platform, with subsea wells, on a boe basis, due to the focus on natu- ough and Browse developments. These exporting gas to support an expansion of ral gas for LNG export and the lack of developments are yet to be sanctioned, the Pluto LNG facilities. oil discoveries. but will be crucial for Australia to main- The largest project under discussion is The shallow water Dorado oil discov- tain supply to the LNG export projects. Browse, which aims to bring online the ery last year by Quadrant Energy (now

The Caldita/Barossa project is around Brecknock, Calliance and Torosa ? elds acquired by Santos) and Carnarvon Petro- 300km north of Darwin. Development offshore West Australia. The project has leum is a signi? cant boost for the region. of Caldita/Barossa is expected to uti- been stalled for a few years, with green- The discovery is reported to hold 2C lize a ? oating, production, storage and ? eld onshore and ? oating LNG proposed resources of 186 million barrels of liq- of? oading (FPSO) vessel with subsea and ruled out, and it is now expected to uids and 552 bcf of gas. This is relative- wells, exporting gas to back? ll the Dar- follow a similar pattern to the other proj- ly small on global scale, but is the larg- win LNG plant. The Scarborough gas ects, utilizing two FPSOs, with subsea est liquids discovery for over 30 years in ? eld is located in the Carnarvon Basin, wells and back? lling the existing North the North West Shelf area. It could spur 375km offshore Western Australia at West Shelf (NWS) LNG trains. further exploration and liquids focused around 900 meters water depth. Devel- Liquids production in Australia has developments nearby.

The Asia-Paci? c offshore oil and gas donesia and China,” said Andrew Har- are at around half the levels of 2014,” industry has begun to emerge from the wood, Wood Mackenzie’s Research Di- Harwood said. “Similarly, the amount of recent global downturn, but remains rector, Asia Paci? c Upstream Oil & Gas. new acreage awarded has also fallen to among the regions where the road to re- “Looking forward, a lack of sustained less than half the levels we saw in 2014.” covery has been particularly slow. exploration activity and success has left Production, too, has been on the de- “Australia has seen positive news on the hopper of new development projects cline through much of Asia-Paci? c, es- new lique? ed natural gas (LNG) start- looking empty.” pecially in Indonesia, where Harwood ups and a surge in merger and acquisi- The prolonged depressed oil price expects to see the largest fall in oil pro- tion activity, but elsewhere optimism has had a particularly harsh effect on duction as legacy producing areas be- has been con? ned to a few pockets of exploration throughout the region. “Ex- come increasingly mature. According to exploration success in Myanmar, In- ploration and appraisal wells in 2018 the International Energy Agency, shal-