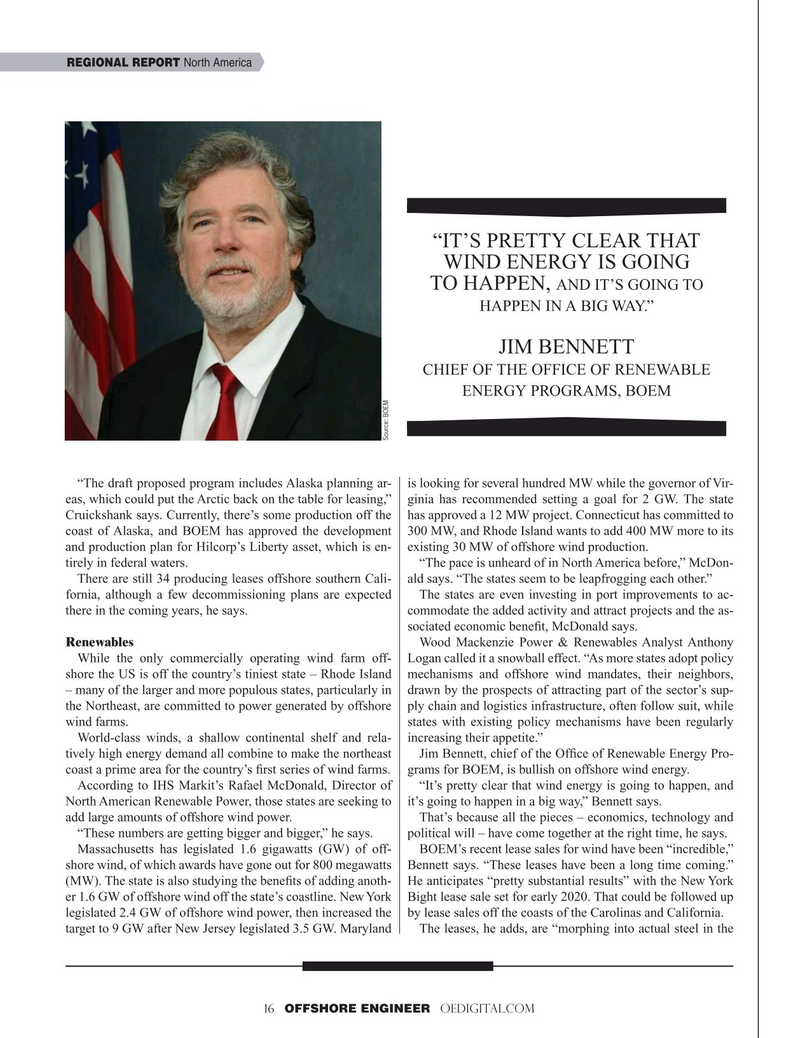 TO HAPPEN, AND IT’S GOING TO

HAPPEN IN A BIG WAY.”

CHIEF OF THE OFFICE OF RENEWABLE

Source: BOEM “The draft proposed program includes Alaska planning ar- is looking for several hundred MW while the governor of Vir- eas, which could put the Arctic back on the table for leasing,” ginia has recommended setting a goal for 2 GW. The state

Cruickshank says. Currently, there’s some production off the has approved a 12 MW project. Connecticut has committed to coast of Alaska, and BOEM has approved the development 300 MW, and Rhode Island wants to add 400 MW more to its and production plan for Hilcorp’s Liberty asset, which is en- existing 30 MW of offshore wind production.

tirely in federal waters. “The pace is unheard of in North America before,” McDon-

There are still 34 producing leases offshore southern Cali- ald says. “The states seem to be leapfrogging each other.” fornia, although a few decommissioning plans are expected The states are even investing in port improvements to ac- there in the coming years, he says. commodate the added activity and attract projects and the as- sociated economic bene? t, McDonald says.

While the only commercially operating wind farm off- Logan called it a snowball effect. “As more states adopt policy shore the US is off the country’s tiniest state – Rhode Island mechanisms and offshore wind mandates, their neighbors, – many of the larger and more populous states, particularly in drawn by the prospects of attracting part of the sector’s sup- the Northeast, are committed to power generated by offshore ply chain and logistics infrastructure, often follow suit, while wind farms. states with existing policy mechanisms have been regularly

World-class winds, a shallow continental shelf and rela- increasing their appetite.” tively high energy demand all combine to make the northeast Jim Bennett, chief of the Of? ce of Renewable Energy Pro- coast a prime area for the country’s ? rst series of wind farms. grams for BOEM, is bullish on offshore wind energy.

According to IHS Markit’s Rafael McDonald, Director of “It’s pretty clear that wind energy is going to happen, and

North American Renewable Power, those states are seeking to it’s going to happen in a big way,” Bennett says.

add large amounts of offshore wind power. That’s because all the pieces – economics, technology and “These numbers are getting bigger and bigger,” he says. political will – have come together at the right time, he says.

Massachusetts has legislated 1.6 gigawatts (GW) of off- BOEM’s recent lease sales for wind have been “incredible,” shore wind, of which awards have gone out for 800 megawatts Bennett says. “These leases have been a long time coming.” (MW). The state is also studying the bene? ts of adding anoth- He anticipates “pretty substantial results” with the New York er 1.6 GW of offshore wind off the state’s coastline. New York Bight lease sale set for early 2020. That could be followed up legislated 2.4 GW of offshore wind power, then increased the by lease sales off the coasts of the Carolinas and California.