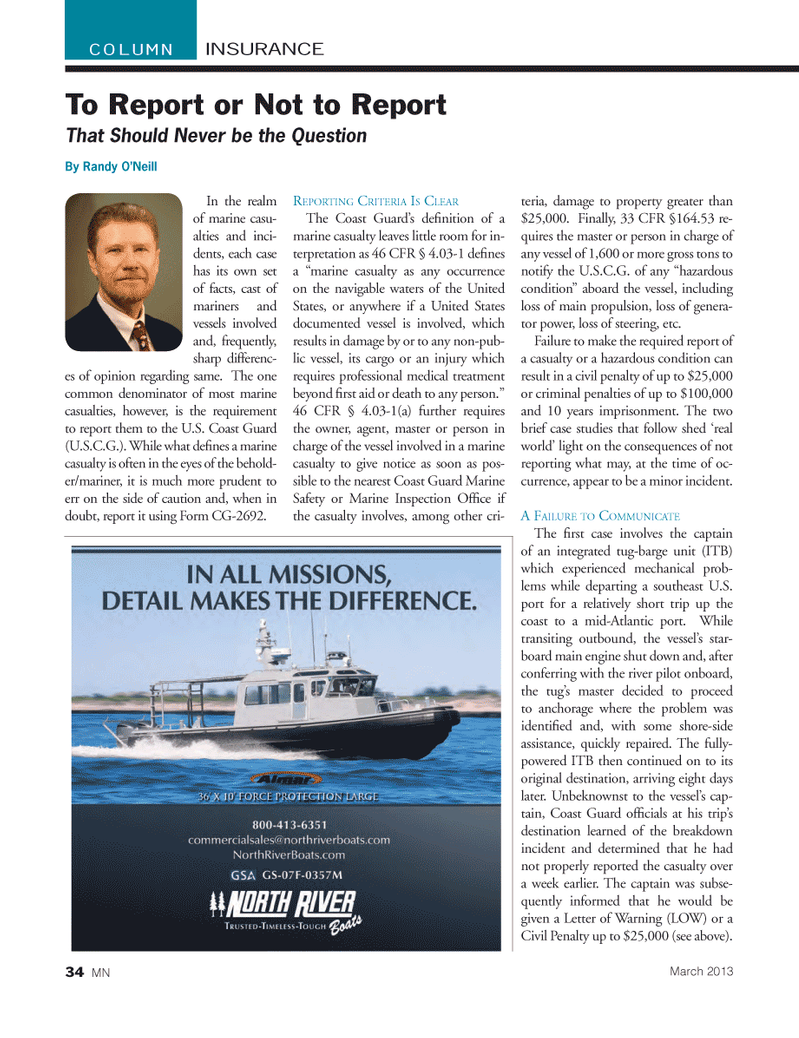 In the realm of marine casu-alties and inci-dents, each case has its own set of facts, cast of mariners and vessels involved and, frequently, sharp differenc- es of opinion regarding same. The one common denominator of most marine casualties, however, is the requirement to report them to the U.S. Coast Guard (U.S.C.G.). While what deÞ nes a marine casualty is often in the eyes of the behold- er/mariner, it is much more prudent to err on the side of caution and, when in doubt, report it using Form CG-2692. REPORTING CRITERIA IS CLEARThe Coast GuardÕs deÞ nition of a marine casualty leaves little room for in- terpretation as 46 CFR ¤ 4.03-1 deÞ nes a Òmarine casualty as any occurrence on the navigable waters of the United States, or anywhere if a United States documented vessel is involved, which results in damage by or to any non-pub- lic vessel, its cargo or an injury which requires professional medical treatment beyond Þ rst aid or death to any person.Ó 46 CFR ¤ 4.03-1(a) further requires the owner, agent, master or person in charge of the vessel involved in a marine casualty to give notice as soon as pos- sible to the nearest Coast Guard Marine Safety or Marine Inspection OfÞ ce if the casualty involves, among other cri- teria, damage to property greater than $25,000. Finally, 33 CFR ¤164.53 re- quires the master or person in charge of any vessel of 1,600 or more gross tons to notify the U.S.C.G. of any Òhazardous conditionÓ aboard the vessel, including loss of main propulsion, loss of genera- tor power, loss of steering, etc. Failure to make the required report of a casualty or a hazardous condition can result in a civil penalty of up to $25,000 or criminal penalties of up to $100,000 and 10 years imprisonment. The two brief case studies that follow shed Ôreal worldÕ light on the consequences of not reporting what may, at the time of oc- currence, appear to be a minor incident. A FAILURE TO COMMUNICATE The Þ rst case involves the captain of an integrated tug-barge unit (ITB) which experienced mechanical prob- lems while departing a southeast U.S. port for a relatively short trip up the coast to a mid-Atlantic port. While transiting outbound, the vesselÕs star- board main engine shut down and, after conferring with the river pilot onboard, the tugÕs master decided to proceed to anchorage where the problem was identiÞ ed and, with some shore-side assistance, quickly repaired. The fully- powered ITB then continued on to its original destination, arriving eight days later. Unbeknownst to the vesselÕs cap- tain, Coast Guard ofÞ cials at his tripÕs destination learned of the breakdown incident and determined that he had not properly reported the casualty over a week earlier. The captain was subse- quently informed that he would be given a Letter of Warning (LOW) or a Civil Penalty up to $25,000 (see above). INSURANCECOLUMNTo Report or Not to Report That Should Never be the QuestionBy Randy O?NeillMarch 2013 34 MNMN March2013 Layout 32-49.indd 34MN March2013 Layout 32-49.indd 343/5/2013 5:03:55 PM3/5/2013 5:03:55 PM