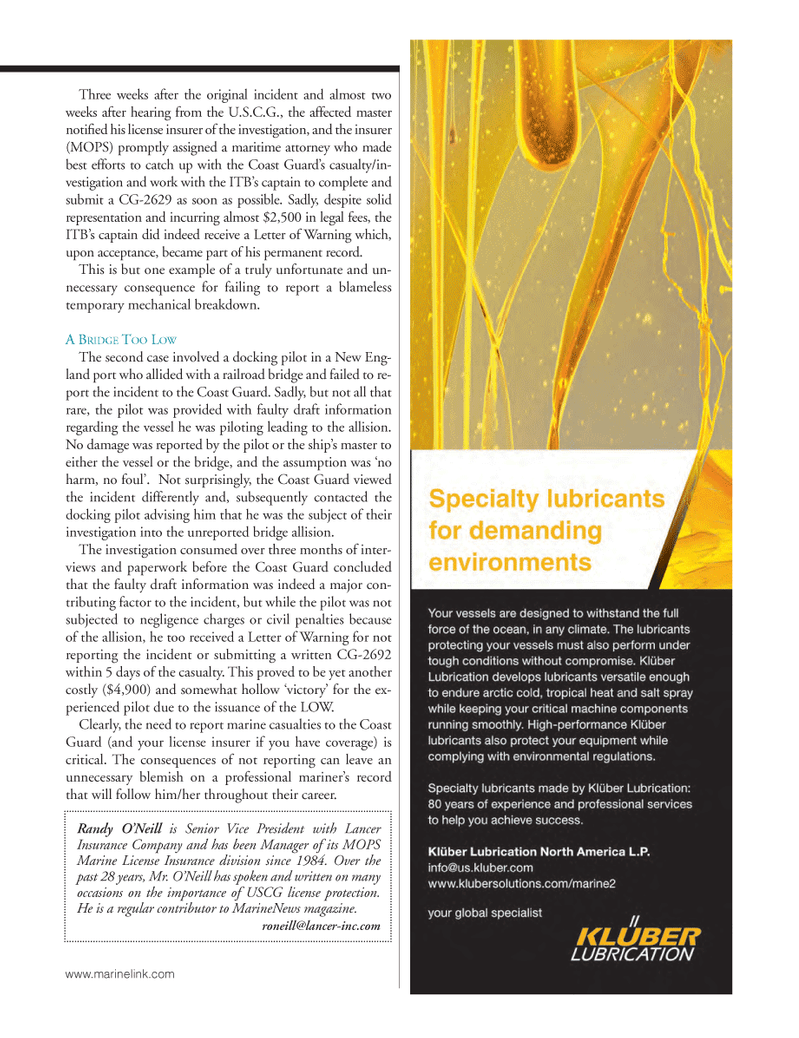 Three weeks after the original incident and almost two weeks after hearing from the U.S.C.G., the affected master notiÞ ed his license insurer of the investigation, and the insurer (MOPS) promptly assigned a maritime attorney who made best efforts to catch up with the Coast GuardÕs casualty/in- vestigation and work with the ITBÕs captain to complete and submit a CG-2629 as soon as possible. Sadly, despite solid representation and incurring almost $2,500 in legal fees, the ITBÕs captain did indeed receive a Letter of Warning which, upon acceptance, became part of his permanent record. This is but one example of a truly unfortunate and un- necessary consequence for failing to report a blameless temporary mechanical breakdown. A BRIDGE TOO LOWThe second case involved a docking pilot in a New Eng- land port who allided with a railroad bridge and failed to re- port the incident to the Coast Guard. Sadly, but not all that rare, the pilot was provided with faulty draft information regarding the vessel he was piloting leading to the allision. No damage was reported by the pilot or the shipÕs master to either the vessel or the bridge, and the assumption was Ôno harm, no foulÕ. Not surprisingly, the Coast Guard viewed the incident differently and, subsequently contacted the docking pilot advising him that he was the subject of their investigation into the unreported bridge allision. The investigation consumed over three months of inter- views and paperwork before the Coast Guard concluded that the faulty draft information was indeed a major con-tributing factor to the incident, but while the pilot was not subjected to negligence charges or civil penalties because of the allision, he too received a Letter of Warning for not reporting the incident or submitting a written CG-2692 within 5 days of the casualty. This proved to be yet another costly ($4,900) and somewhat hollow ÔvictoryÕ for the ex- perienced pilot due to the issuance of the LOW. Clearly, the need to report marine casualties to the Coast Guard (and your license insurer if you have coverage) is critical. The consequences of not reporting can leave an unnecessary blemish on a professional marinerÕs record that will follow him/her throughout their career. Randy O?Neill is Senior Vice President with Lancer Insurance Company and has been Manager of its MOPS Marine License Insurance division since 1984. Over the past 28 years, Mr. O?Neill has spoken and written on many occasions on the importance of USCG license protection. He is a regular contributor to MarineNews magazine. [email protected] www.marinelink.com MN March2013 Layout 32-49.indd 35MN March2013 Layout 32-49.indd 353/4/2013 3:16:46 PM3/4/2013 3:16:46 PM