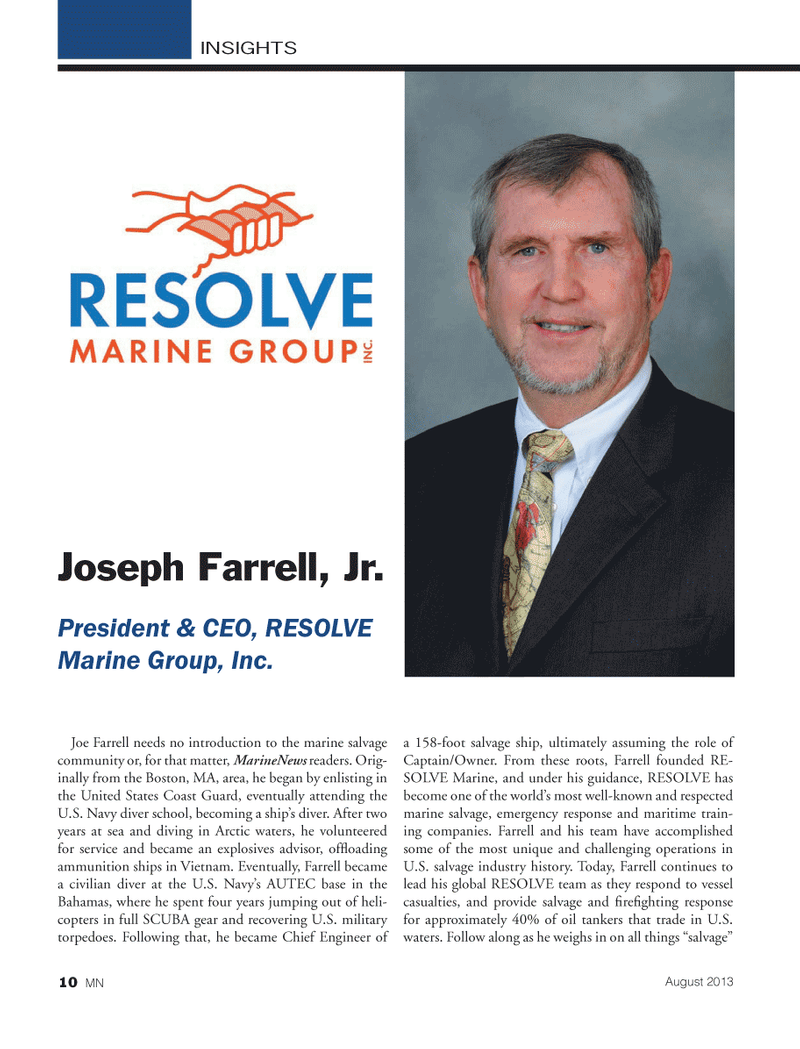 Joe Farrell needs no introduction to the marine salvage community or, for that matter, MarineNews readers. Orig- inally from the Boston, MA, area, he began by enlisting in the United States Coast Guard, eventually attending the U.S. Navy diver school, becoming a ships diver. After two years at sea and diving in Arctic waters, he volunteered for service and became an explosives advisor, of? oading ammunition ships in Vietnam. Eventually, Farrell became a civilian diver at the U.S. Navys AUTEC base in the Bahamas, where he spent four years jumping out of heli- copters in full SCUBA gear and recovering U.S. military torpedoes. Following that, he became Chief Engineer of a 158-foot salvage ship, ultimately assuming the role of Captain/Owner. From these roots, Farrell founded RE- SOLVE Marine, and under his guidance, RESOLVE has become one of the worlds most well-known and respected marine salvage, emergency response and maritime train- ing companies. Farrell and his team have accomplished some of the most unique and challenging operations in U.S. salvage industry history. Today, Farrell continues to lead his global RESOLVE team as they respond to vessel casualties, and provide salvage and ? re? ghting response for approximately 40% of oil tankers that trade in U.S. waters. Follow along as he weighs in on all things salvage? INSIGHTSJoseph Farrell, Jr. President & CEO, RESOLVE Marine Group, Inc.August 201310 MNMN August2013 Layout 1-17.indd 107/23/2013 7:40:27 PM