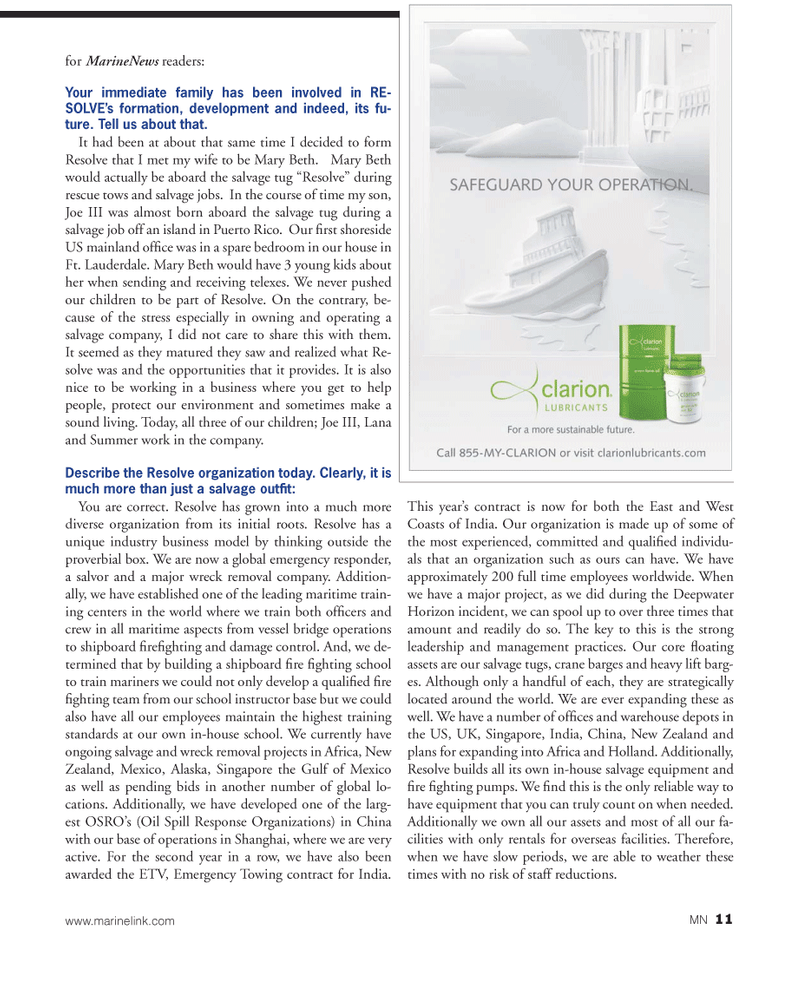 for MarineNews readers: Your immediate family has been involved in RE- SOLVEs formation, development and indeed, its fu- ture. Tell us about that. It had been at about that same time I decided to form Resolve that I met my wife to be Mary Beth. Mary Beth would actually be aboard the salvage tug Resolve? during rescue tows and salvage jobs. In the course of time my son, Joe III was almost born aboard the salvage tug during a salvage job off an island in Puerto Rico. Our ? rst shoreside US mainland of? ce was in a spare bedroom in our house in Ft. Lauderdale. Mary Beth would have 3 young kids about her when sending and receiving telexes. We never pushed our children to be part of Resolve. On the contrary, be- cause of the stress especially in owning and operating a salvage company, I did not care to share this with them. It seemed as they matured they saw and realized what Re- solve was and the opportunities that it provides. It is also nice to be working in a business where you get to help people, protect our environment and sometimes make a sound living. Today, all three of our children; Joe III, Lana and Summer work in the company. Describe the Resolve organization today. Clearly, it is much more than just a salvage out? t: You are correct. Resolve has grown into a much more diverse organization from its initial roots. Resolve has a unique industry business model by thinking outside the proverbial box. We are now a global emergency responder, a salvor and a major wreck removal company. Addition- ally, we have established one of the leading maritime train- ing centers in the world where we train both of? cers and crew in all maritime aspects from vessel bridge operations to shipboard ? re? ghting and damage control. And, we de- termined that by building a shipboard ? re ? ghting school to train mariners we could not only develop a quali? ed ? re ? ghting team from our school instructor base but we could also have all our employees maintain the highest training standards at our own in-house school. We currently have ongoing salvage and wreck removal projects in Africa, New Zealand, Mexico, Alaska, Singapore the Gulf of Mexico as well as pending bids in another number of global lo- cations. Additionally, we have developed one of the larg- est OSROs (Oil Spill Response Organizations) in China with our base of operations in Shanghai, where we are very active. For the second year in a row, we have also been awarded the ETV, Emergency Towing contract for India. This years contract is now for both the East and West Coasts of India. Our organization is made up of some of the most experienced, committed and quali? ed individu- als that an organization such as ours can have. We have approximately 200 full time employees worldwide. When we have a major project, as we did during the Deepwater Horizon incident, we can spool up to over three times that amount and readily do so. The key to this is the strong leadership and management practices. Our core ? oating assets are our salvage tugs, crane barges and heavy lift barg- es. Although only a handful of each, they are strategically located around the world. We are ever expanding these as well. We have a number of of? ces and warehouse depots in the US, UK, Singapore, India, China, New Zealand and plans for expanding into Africa and Holland. Additionally, Resolve builds all its own in-house salvage equipment and ? re ? ghting pumps. We ? nd this is the only reliable way to have equipment that you can truly count on when needed. Additionally we own all our assets and most of all our fa- cilities with only rentals for overseas facilities. Therefore, when we have slow periods, we are able to weather these times with no risk of staff reductions. MN 11www.marinelink.com MN August2013 Layout 1-17.indd 117/23/2013 7:40:46 PM